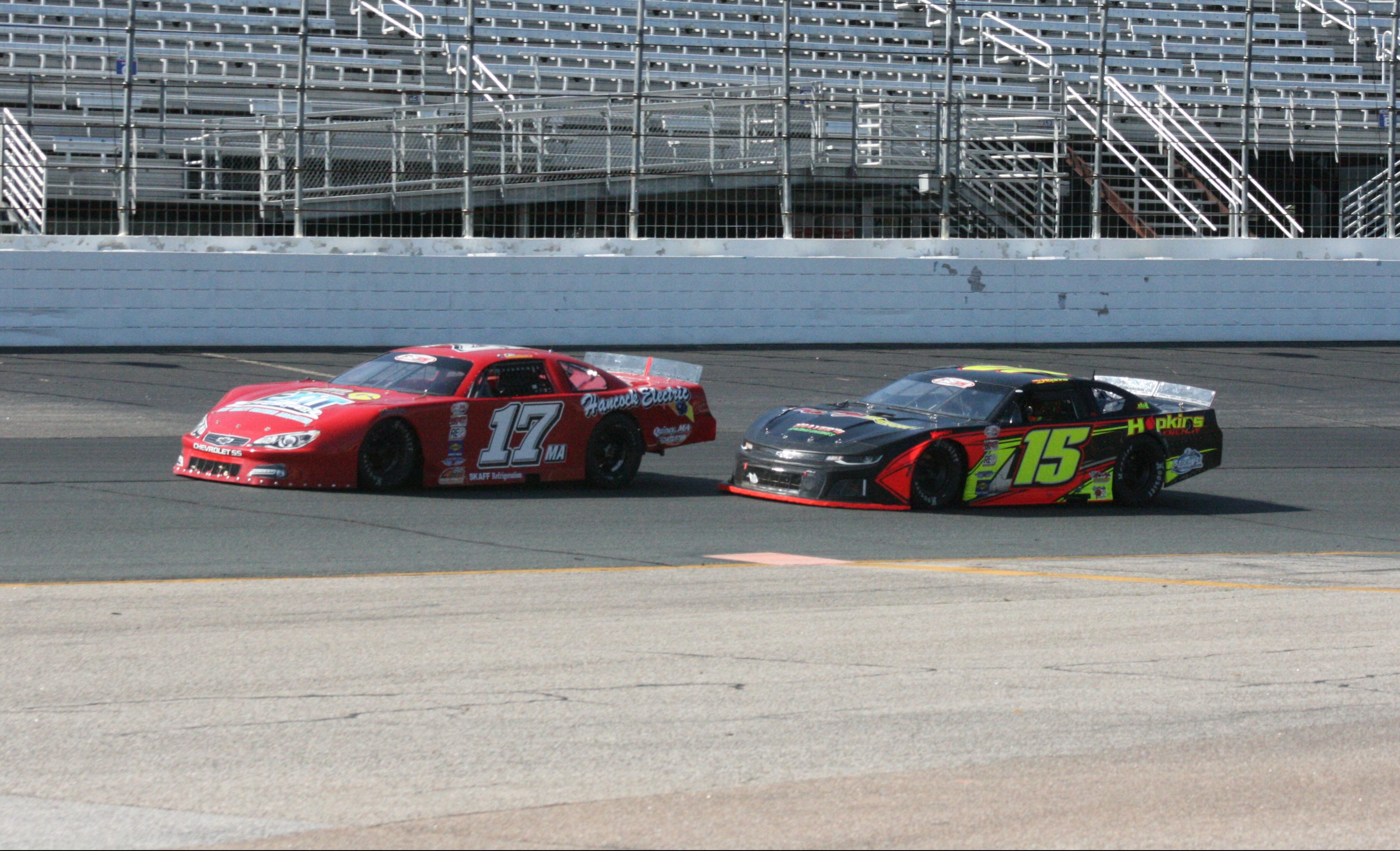 Fans of short track racing were treated to a spectacle this weekend, as over 100 cars and teams from New England’s beloved bullrings convened at the region’s largest speedway. For the third year running, weekly racing heroes were the star attraction at New Hampshire Motor Speedway as part of the New England Short Track Showdown.

And while every driver hoped to be part of a fairy tale outcome, some of New England’s most decorated racers stood atop the podium in the two-day, six-feature event.

The PASS North Super Late Models, returning to NHMS after a four-year absence, did not disappoint in their first year as part of the Short Track Showdown. The 50-lap shootout ended in a drag race to the checkered flag, with Rowley, Massachusetts’ Eddie MacDonald hanging on for the win.

MacDonald was an easy pre-race favorite, but Derek Griffith appeared primed for an upset once the green flag dropped. Griffith dispatched MacDonald and early leader Reid Lanpher, then pulled away to a considerable lead approaching the race’s midway break. After the restart, though, MacDonald took back the top spot, with Griffith unable to keep pace.

In the final ten laps of the feature, though, Mike Hopkins’ car came to life. The Hermon, Maine racer worked around Griffith and carved away MacDonald’s lead, catching the veteran with only a couple laps left. Hopkins drew alongside MacDonald off turn four on the final lap, the two leaders swapping paint down the frontstretch, but “The Outlaw” edged out Hopkins by a few feet to take the win.

MacDonald’s win was his eleventh at NHMS across all divisions, second only to NASCAR star Kyle Busch. Among his wins are a victory in PASS’ first visit to NHMS in 2015, as well as the inaugural Short Track Showdown feature in 2017.

The Valenti Modified Racing Series was not to be outdone, wrapping up the afternoon of racing with the sort of thriller the open-wheeled cars are renowned for. After swapping the lead back and forth in the closing laps, Ronnie Williams took the win and a $5,000 winner’s purse.

Williams’ chances for victory looked grave Saturday, when the Gary Casella-owned #25 blew an engine during practice. Undeterred, the team returned to their Saugus, Mass. shop, replaced the engine, and returned in time for practice Sunday morning.

Starting ninth in the field, Williams worked his way to the front, trading the lead in the final half of the race with Chase Dowling and former VMRS champion Anthony Nocella. Williams seized the top spot with the white flag flying, but Nocella powered past to take the lead through turns three and four. Off turn four, Williams took the high line and took the lead back with it, barely beating Nocella at the Granite Stripe.

Jeffrey Gallup stole third at the checkers, with Dowling settling for fourth and Mike Willis, Jr. rounding out the top five. For Williams, who spent last season racing on NASCAR’s Modified Tour, the win was his second in three starts in the potent Casella #25 ride.

Matthew Kimball earned one of the biggest victories of his young career in the 25-lap NEMST race that opened the afternoon’s features. The Bennington, N.H. teenager had won two straight NEMST features at Oxford Plains Speedway and White Mountain Motorsports Park, but the NHMS victory easily eclipsed those triumphs.

Defending Showdown winner Niko Maniatis shot out to an early lead, but drivetrain problems seven laps into the race handed the lead to Kimball. Emerson Cayer challenged the sophomore Tour racer for the lead, but Kimball ultimately drove away from the 2017 champion for his third straight victory.

Cayer crossed the line second, with a hard-charging Devin Guy third. Joe Kendall finished fourth with Matthew Sonnhalter fifth. Manufacturer diversity was a theme in the top five: Kimball and Guy drove Honda-powered entries, Cayer wheeled a Ford Mustang, Kendall’s mount was a Merkur XR4Ti, and Sonnhalter was in a Volkswagen Jetta mini-truck.

Over forty cars and trucks took the green for the Street Stock Showdown Series main event, though for most of the race, it appeared to be a battle of two. Inaugural event winner Corey Hutchings led early, but defending winner Alby Ovitt took charge in the second half of the race. Ovitt, from Somersworth, N.H., drove away from the pack to claim his second straight Short Track Showdown victory. Connor McDougal took second in the closing laps from Hutchings, who finished third. Steve Landry and Maine’s Kyle Hewins rounded out the top five.

The second half of the feature program was delayed twice by lengthy red flags. The first, eight laps into the Street Stock Showdown Series event, was for an extended track cleanup in turn three. The second was for a grinding crash in the VMRS feature. Veteran Roy Seidell, Jr. spun in turn two and collected Dave Etheridge, who was running among the leaders. Seidell was transported, awake and alert, to a local hospital.

In an era when short track racing has earned a renewed appreciation among big-league racing fans, the New England Short Track Showdown has found a home at one of the few big-league race tracks that can directly support the region’s short track infrastructure. The addition of the PASS Super Late Models this year rounded out the program with an added boost of regional star power and intrigue, while the ground-pounding VMRS Modifieds staged a finale as thrilling as those of their NASCAR-sanctioned brethren.

But the true value of the weekend may not be in what the Showdown delivers for the fans, but in the once-in-a-lifetime opportunity and the honor it represents for its competitors. Some of those competitors have been fortunate enough to be a part of all three Showdowns thus far, and many are surely looking forward to their fourth.