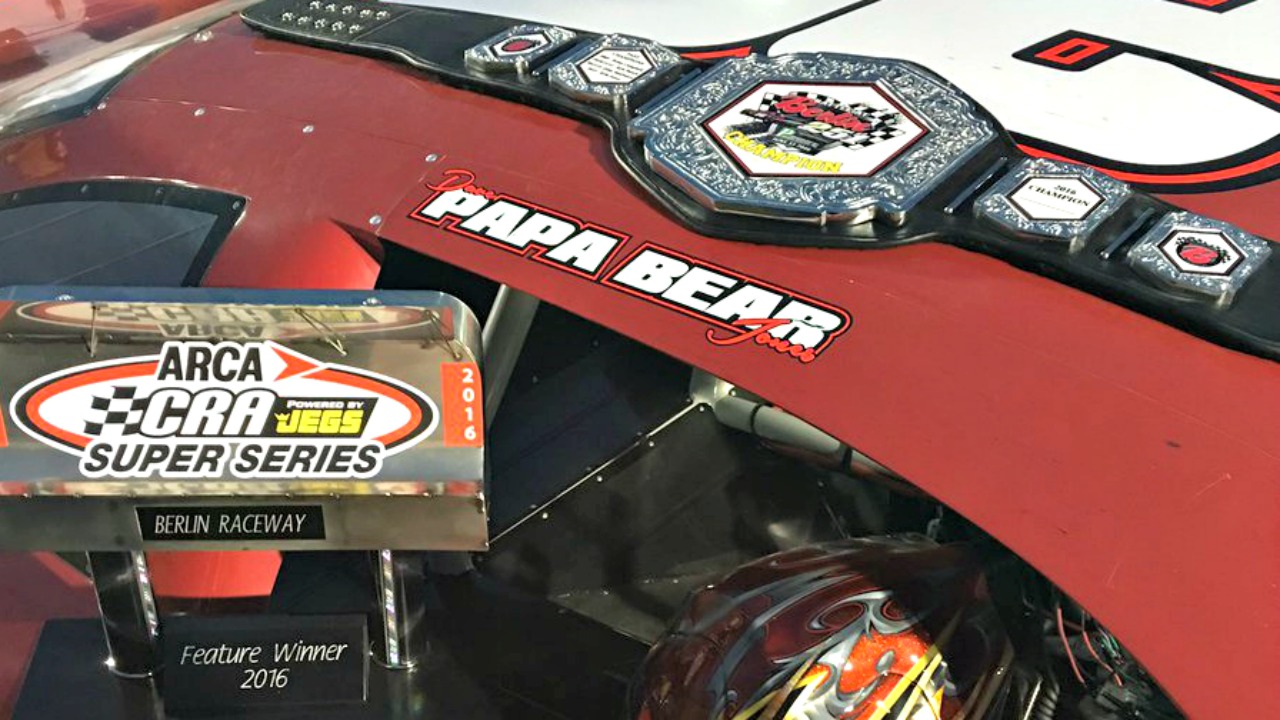 This one was for Papa Bear.

Erik Jones returned to his roots on Monday night, stepping back into a Super Late Model for the first time since last summer, and did so under the most emotional circumstances. Even though this appearance had been planned since January, the desire to win grew substantially when Jones’ father, Dave, passed away on Tuesday.

With Papa Bear printed over his door panel, Jones was reunited with spotter Branden Lines with the goal of winning the Battle at Berlin 251 just an hour away from the family home in Byron, Michigan. Not only did they succeed, they exceeded, pulling away late over a stout cast of challengers that included Bubba Pollard, Johnny VanDoorn and Dalton Sargeant.

“This was a special weekend for us,” Jones said in Victory Lane. “This is for my dad. I wish he could be here for this. This was an awesome car and this is an awesome team.”

The elder Jones supported his son with everything he had, pouring nearly every last resource into the family Super Late Model team. That faith was rewarded in December of 2012 when Erik defeated Kyle Busch in the Snowball Derby, launching a career that has accumulated victories and championships at the highest levels of NASCAR.

Now 20-years-old, Erik sets out each weekend to validate his father’s faith and continues to do so with aplomb.

Despite his resume and accomplishments, Jones didn’t have the fastest car over the past several days. There were time during the race that Pollard and VanDoorn looked more capable of winning but Jones played his strategy right in the first half and was fastest in the second half when it mattered the most.

Jones intentionally tanked several positions over the final 10 laps of the first 100-lap segment in the hopes of correctly guessing how the top-10 random invert would play out. It was a fortuitous gamble as the decision flipped him from sixth to second for the start of the second segment.

He first took the lead with five laps to go in the second 100-lap segment and would restart there after selecting the pole during the top-five redraw for the final 51-lap dash.

Jones proved to be lucky on Monday night, but also fast and extremely motivated to honor his father and best friend.

“This wasn’t a given at all,” Jones said. “Everyone is so good when they come here for big races like this. We caught some lucky breaks but we were fast at the end when it mattered.”

With the victory, Jones collected $15,000 and won the first round of the CRA Super Series Triple Crown. If a driver can win Berlin, the RedBud 300 at Anderson Speedway and the Winchester 400 at Winchester Speedway, he or she will collect a $100,000 bonus.

Jones did so last year but doesn’t expect to be able to defend that crown due to a NASCAR conflict.

With that said, no achievement could mean more right now. For Jones and the No. 20 team, the Battle at Berlin was about more than the spoils of victory. It was about pride, family and heritage.

With Papa Bear looking over him, Erik Jones came home and claimed victory on a night he’ll never forget.