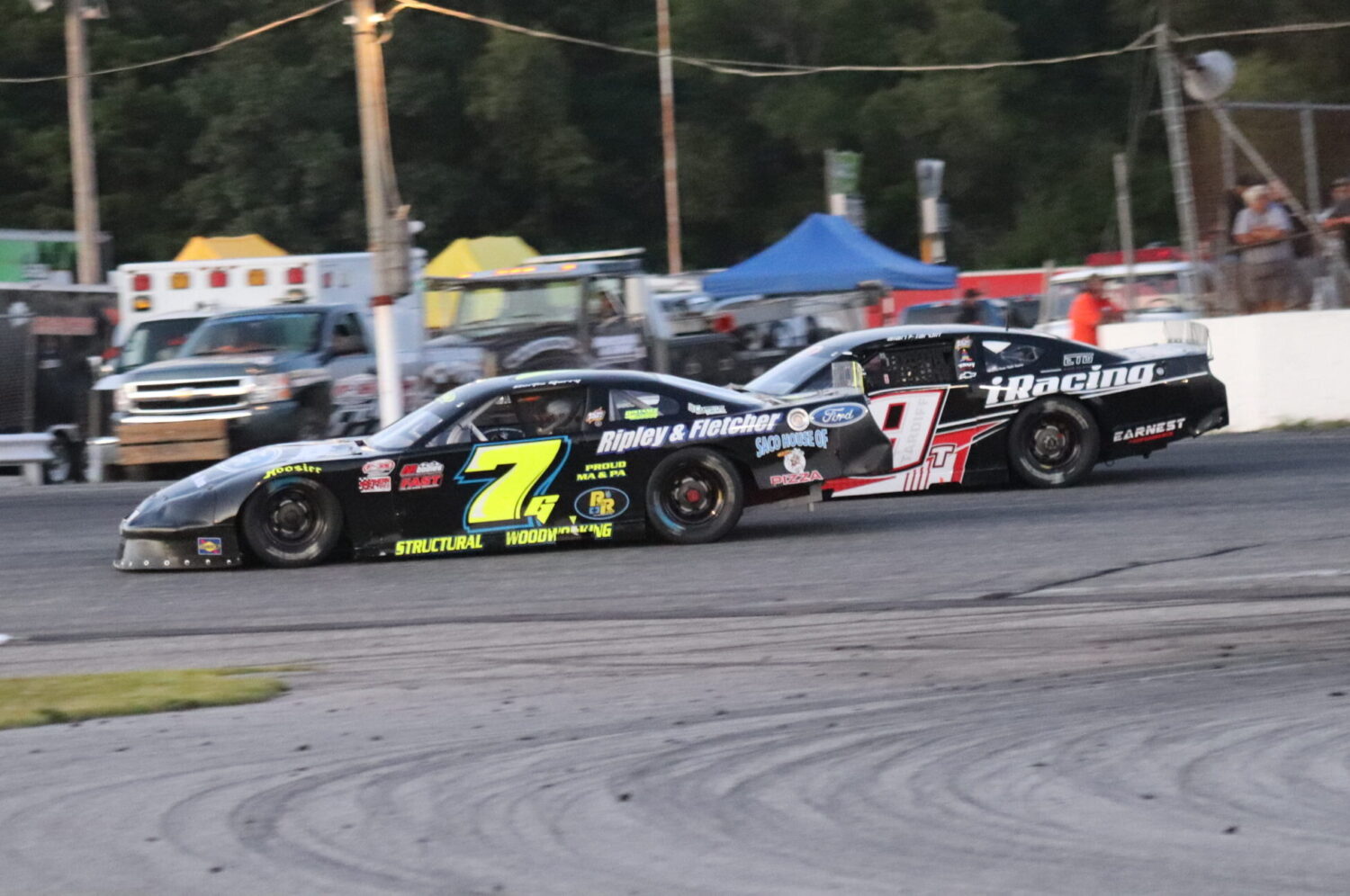 PASS NORTH: GERRY BACK ON TOP IN PASS TOURING ACTION

Last July, Curtis Gerry broke a Pro All Stars Series dry spell at Oxford Plains Speedway, winning a non-points Oxford 250 qualifier followed by a more traditional 150-lap feature the following weekend. And despite plenty of opportunities, Gerry had gone winless on the touring circuit since then.

But Gerry broke the slump last Saturday, leading every lap to capture his eighth career PASS North feature in a Saturday-night touring date at his new home track.

Gerry’s eight wins have all come since his breakout victory in the 2017 Oxford 250, including a four-win streak between 2017 and 2018. Even though his touring production has slowed, Gerry has been tough on the local tracks, with titles at Beech Ridge Motor Speedway in 2016 and 2018 and an Oxford track championship in 2019.

Dave Farrington, Jr., who has spent a lot of time at Oxford this year after limiting his PASS activity to August’s 250, was Gerry’s closest competition, finishing second to match a career-best result. Farrington, like Gerry, is a two-time Beech Ridge Pro Series champion; the reigning BRMS champ’s first came in 2014.

Travis Benjamin injected some touring flavor into the podium, finishing third ahead of Massachusetts racers Derek Ramstrom and Jake Johnson.

Nick Sweet, the points leader entering the event, finished sixth, second-best among the touring racers. The rest of the top ten was locally-drawn, with Gary Smith and Alan Wilson rounding out the lead lap finishers, GSPSS champion Joey Doiron finishing ninth, and Ryan Robbins driving from the back of the pack to finish tenth after suffering engine issues in his heat.

Alan Tardiff was 13th, but for the rest of the championship hopefuls, the night was not so stellar. DJ Shaw struggled to a 16th-place finish with tire issues. Teammate Gabe Brown was three laps back in 24th. Johnny Clark and Ben Rowe also finished multiple laps off the pace. Even Ben Ashline, who impressed in 2019 in Ajay Picard’s car, has struggled to put a solid finish together this year.

Derek Griffith made a return to PASS after a couple weeks on the ARCA Menards Series circuit, starting deep in the pack but driving his way to 12th at the checkers.

Gerry, Ramstrom, Farrington and Austin Teras won heats to set the 35-car grid, with Joey Doiron and Mike Rowe earning consi victories. Five cars, including Oxford aces TJ Brackett and Scott Moore, loaded up early. Kelly Moore was back in son Ryan’s car after a solid run at White Mountain Motorsports Park a couple weeks ago. Brandon Barker was back in the Steve Murphy-owned #M3.

Travis Benjamin’s top-three finish inched him ahead of Nick Sweet in points, with an eleventh-place run his worst of the year compared to Sweet’s WMMP DNF in the second event of the season. DJ Shaw remains third in the standings.

The PASS North Super Late Models were back in action for a Friday-night feature at Riverside Speedway in Groveton, N.H. A breakdown of the event will be available this week.

While the PASS Super Late Models waged war at Oxford, Beech Ridge Motor Speedway opened the pit gates for the first time in 2020. With fan attendance still restricted in the state of Maine, the Scarborough track opted to run a seven-race open-competition series in lieu of a traditional point-chasing affair. Trevor Sanborn opted to side with the track where he raced full-time in 2018, edging out David Oliver at the line to win the 75-lap feature. Rusty Poland was third, with Evan Beaulieu fourth in his return to competition after a couple years away. Wyatt Alexander, who had planned a weekly run at Beech Ridge this season, finished seventh. With Mike Rowe opting for the PASS feature, Joe Pastore jumped in the Caruso-Fowler #24.

A rain-delayed Friday feature for Thunder Road’s ACT-rules Late Models was on tap for this week, with double points in store for the top finishers. Scott Dragon slipped past rookie Matthew Smith to take the lead and the win, vaulting him back into the points conversation after missing the green flag a few weeks back. Marcel J. Gravel and Jim “Boomer” Morris rounded out the podium with Smith finishing fourth.

After Friday’s PASS feature at Riverside Speedway in Groveton, the Super Late Models will have a weekend off before their next race date at White Mountain Motorsports Park on August 9th.

The Granite State Pro Stock Series is back in action after their own Friday-night tilt at Claremont Motorsports Park. The GSPSS will venture next to Monadnock Speedway on Saturday evening.

The American-Canadian Tour races this afternoon, with pay-per-view coverage still available for today’s Community Bank N.A. 150. The series will have a one-week break before regrouping for the 250-lap Midsummer Classic at White Mountain Motorsports Park.