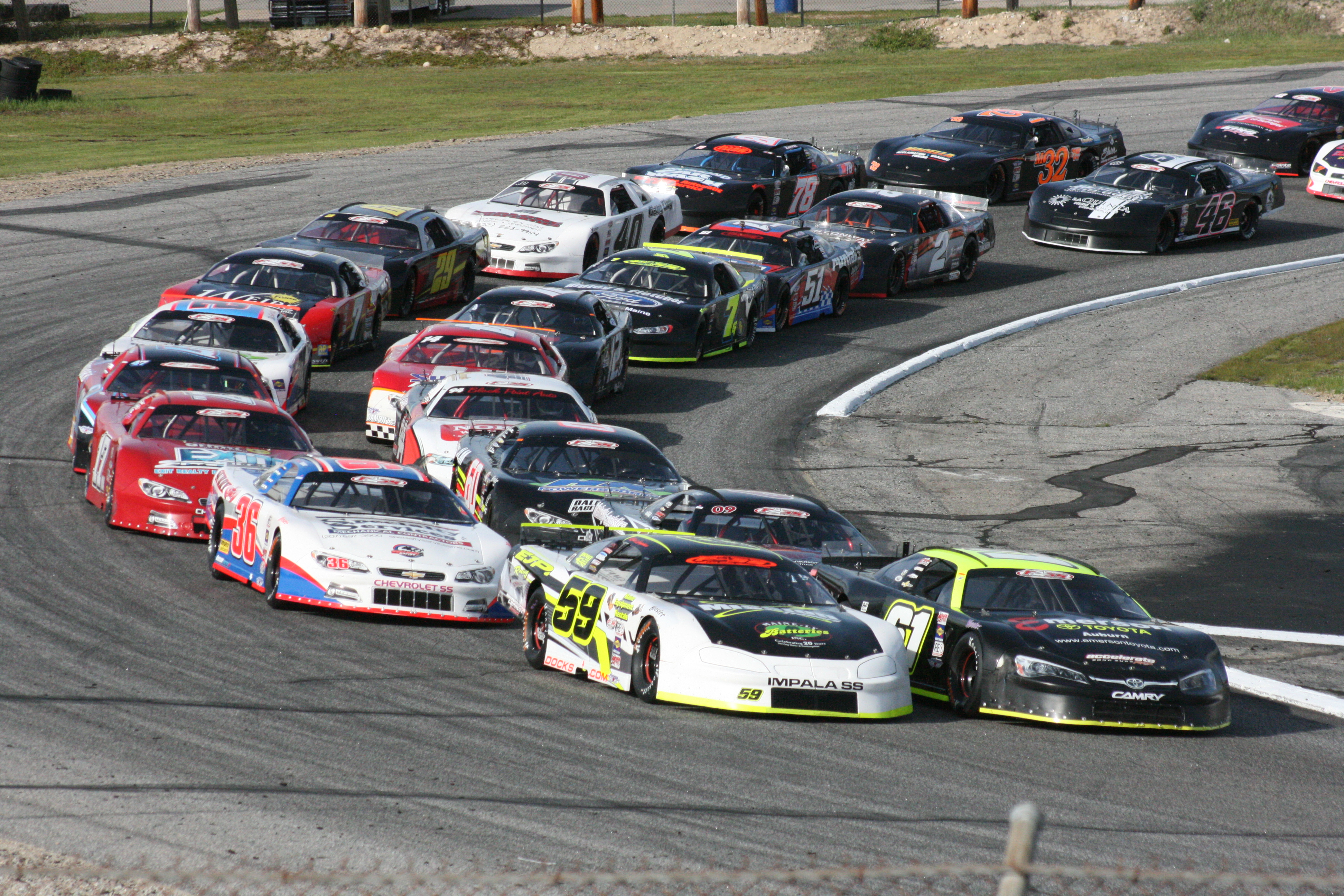 The Granite State Pro Stock Series was scheduled to run Saturday night with a feature at White Mountain Motorsports Park in North Woodstock, NH. Unfortunately, with inclement weather forecast for the North Country, WMMP and GSPSS officials opted to cancel the evening’s racing rather than face a certain rainout. The race has been rescheduled for Saturday, August 18th. Weather has been especially cruel to the quarter-mile nestled in the White Mountains; this is the fifth weather postponement for WMMP this season.

The Pro All Stars Series returned to home base Sunday with a late-afternoon feature at the famed Oxford Plains Speedway. With the Oxford 250 looming in a month, the 150-lap run was a final opportunity for teams to prepare in race trim for the region’s richest and most prestigious Super Late Model event. As an additional bonus, provisionals were available to the winner and second-place finisher, guaranteeing entry into either the 250 or the fall’s Commonwealth Classic at Richmond (VA) Raceway.

The summer weekly features at Oxford often draw teams preparing for the 250, and Saturday night’s features were no exception, with 27 cars competing in the Super Late Model feature. Sunday’s pits looked even closer to the 250 crowd, with fifty teams presenting cars for competition in what was the deepest field of the 2018 season by far. Oxford and Beech Ridge regulars like the Bracketts, Alan Tardiff, Curtis Gerry and Mike Rowe were givens. Joe Squeglia, Jr., Bryan Kruczek and John Salemi represented New Hampshire. Derek Ramstrom led a Massachusetts contingent including ACT racer Adam Gray and Greg Nanigian. Lonnie Sommerville and Cassius Clark in the King Racing #13 came down from the Canadian Maritimes.

Sprinkled through the pits were a battery of part-time and one-off entries. Ray Christian III and Rusty Poland took advantage of a GSPSS rainout Saturday evening. Former NASCAR Busch North stars Kelly Moore and Tracy Gordon, each with an Oxford win on the season, were accompanied by fellow Busch North alum Bill Penfold. Thunder Road rookie Evan Hallstrom was in his family’s #1VT SLM. Joey Polewarczyk, Jr. and Wayne Helliwell, Jr., who ended the 2016 event in a thrilling dead heat, hoped to replicate their success.

Five heats were the first step in whittling down the entry list to a starting lineup. Lonnie Sommerville, Curtis Gerry, Joey Pole and Ray Christian III were heat winners along with Nick Sweet, who returned to PASS competition for the first time since Thunder Road in May. Wyatt Alexander, Glen Luce, and Oxford regular Calvin Rose, Jr. won the three consis, with twelve of the remaining drivers gridding up for a last-chance qualifier to set the field. TJ Brackett won the LCQ, with Tracy Gordon, Scott Robbins and Mike Hopkins also advancing to the 35-car lineup. Full-timers Travis Benjamin and Derek Griffith were forced to take provisionals to make the field. Fifteen drivers were not so fortunate; Rusty Poland, John Salemi and Bill Penfold were among those failing to transfer, while others like Wayne Helliwell, Jr. (who suffered engine trouble in his heat) packed up earlier.

Sommerville and Sweet led the field to green, engaging in an early three-car battle with Ray Christian III. Within ten laps, though, sixth-place starter Cassius Clark was carving through the lead battle. Clark planted himself at the head of the field and stayed there. It was a replay of April’s Oxford opener, when Clark lapped well into the top ten by race’s end. Though Clark had been stripped of a win at the IWK 250 weeks before due to a technical disqualification, redemption was not on his mind; being prepared for the upcoming Oxford 250, a race Clark has not yet won, was paramount.

Much like a replay of April’s Oxford opener, though, Curtis Gerry was on a charge of his own, with the heat winner climbing from an eleventh-place starting berth to run third. A late caution drew the top few cars back together, and like in April, Gerry made his move, taking to the high side of Cassius Clark with 20 laps remaining. Two more restarts failed to give Clark the opportunity he needed. Curtis Gerry fell short at Beech Ridge in a bid for five consecutive victories in five attempts, but he led the final 20 laps at Oxford to take his fifth Oxford Plains Speedway PASS North win in a row, dating back to last year’s Oxford 250. Travis Benjamin was the last driver other than Gerry to score a checkered flag at PASS’ home track, doing so a year ago.

Oxford veterans Alan Tardiff and TJ Brackett finished on the lead lap, but back in 12th and 18th, respectively. Front-row starters and early leaders Lonnie Sommerville and Nick Sweet faded to 17th and 19th at the end, with Ray Christian III coming home 13th. Mike Rowe was 14th, one position ahead of 2015 Oxford 250 winner Glen Luce. Joey Polewarczyk was 29th in the rundown, failing to finish the race. Tracy Gordon, winner of the previous night’s weekly feature at Oxford, was 33rd, with part-time veteran Johnny Clark dragging up the rear of the field.

With starts in the Oxford 250 already assured, both Gerry and Cassius Clark took their provisionals for the fall Commonwealth Classic in Virginia.

The fortunes of Shaw and Benjamin contrasted with the other points contenders in the field, none of whom finished better than 25th. Ben Rowe was two laps down at the finish, with Derek Griffith five laps down in 26th. Garrett Hall was 28th at the end. Griffith’s finish was the most damaging, as the two-time feature winner will slip to third in the points standings behind leader Shaw and new runner-up Benjamin. Garrett Hall and Ben Rowe were already well back of the leaders, and have a significant advantage on sixth-place Reid Lanpher, who has entered three fewer races (but only has one finish out of the top five in those eight starts).

For many in the field, and particularly the top three, the points picture pales in comparison to what this means for the upcoming Oxford 250. With his five-race winning streak at the flat three-quarter-mile, Curt Gerry remains the odds-on favorite to repeat in the 250. Cassius Clark and Reid Lanpher are likely to be Gerry’s top challengers. The results sheets from the recent races at Oxford suggest that no one else is remotely close.

However, despite guaranteed starts and pre-race advantages, drivers still have to progress through the heats to make the race, and a guaranteed start means nothing if a driver has no car or engine with which to make the grid. Gerry, Clark and Lanpher may have an advantage, but there are no guarantees.

The PASS North teams were scheduled to race this Friday evening at Lee USA Speedway, but track and PASS officials called off the race Thursday with severe weather a near-certainty. The next race on the schedule is a trip to Speedway 51 in Groveton, NH on the 11th of August, the final race before the Oxford 250; however, word remains if a rain date can be found for the Lee event.

Western Massachusetts ACT racer Adam Gray performed double duty Sunday at Oxford, making his second attempt of the season in a PASS Super Late Model. While Gray failed to make the lineup for what was a stacked field, he won the afternoon’s 40-lap PASS Modified feature in only his third start in the division.

Scott Dragon won his second feature in a row last Thursday at Thunder Road International Speedbowl, capturing the Late Model feature of the Times-Argus Mid-Season Championships. Jason Corliss finished second with Trampas Demers third. The 2016 “King of the Road” took the weekly points lead from Demers with four weekly races left in the season, with Corliss a few points behind in third.

Oxford Plains Speedway ran their weekly Oxford Championship Series program on the eve of Sunday’s PASS race, with a number of the visiting touring teams opting to shake down their equipment Saturday night. Twenty-seven Super Late Models made the call for the 50-lap feature. Tracy Gordon, almost a month removed from his victory in the PASS Open, took the lead halfway through the feature and held on for his first weekly SLM win of 2018. Tim Brackett finished second while shaking down a new car for the Oxford 250. Gabe Brown benefited from a late-race incident for Andy Saunders to come home third. Interestingly, the podium for both of Gordon’s 2018 wins has consisted of Gordon, a Brackett and a teenager (with Tim’s son TJ and Austin Teras filling those roles in the PASS Open).

Beech Ridge Motor Speedway had a grand night in store for Saturday evening, with extra-length features to celebrate the track’s 70th year in operation. While some tracks dodged the weather, Beech Ridge was caught in the storm, forcing officials to call off the evening’s racing. Nearby Wiscasset Speedway was able to get a partial program in before rain ended their evening. Cody Tribbett won the track’s Pro Stock feature over a visiting Dave Farrington, Jr. and Daren Ripley. Misfortune has left Farrington well out of the points race at Beech Ridge, and he appears to be shifting to a pick-and-choose schedule for the rest of 2018.

Star Speedway’s weekly features ran this week in support of the annual SBM 125, an open-comp Modified feature now run as part of the Tri-Track Open Modified Series. While a surprise thunderstorm swept in to delay the SBM 125 to Sunday, the weekly racing got in under the gun. In a reversal of last week, Aaron Fellows topped the field in a clean Late Model feature. Max Dolliver, making his second Late Model start, finished second to Fellows after beating the ACT veteran a week before. Rhode Island’s Charlie Rose was third.

Seekonk Speedway was fortunate to dodge the rain its northern brethren could not, with weekly features on schedule for the first time in two weeks. Ryan Kuhn beat Mark Jenison to take the Late Model checkered flag, while David Darling atoned for the disappointment of losing the U.S. Pro Stock/Super Late Model Nationals with a weekly win in his #52 Pro Stock. Dylan Estrella finished second in the feature, with Rick Martin third.

With PASS and Lee USA Speedway already calling this weekend’s racing, the American-Canadian Tour is flying solo this weekend. A week after the GSPSS teams were rained out at White Mountain Motorsports Park, the ACT Tour teams will give it a shot Sunday afternoon against WMMP’s local stars. The Sunday race is actually a pre-emptive rescheduling, with the track falling back on a rain date to avoid another rainout this weekend.