The next-generation Super Late Model body is available but most promoters have yet to approve it for use.

The Super Late Model body ‘merry go round’ continues to go ’round and ’round.

Five Star Bodies formally revealed its Gen-6 Super Late Model bodies on Wednesday afternoon and the Approved Body Committee (ABC) comprised of promoters from across the country have once again rejected it for use in their respective divisions.

December 11, 2013: Five Star Bodies reveals a Gen-6 Late Model Stock prototype body at the Performance Racing Industry trade show in Indianapolis, Indiana. The body was originally designed to be a Late Model Stock but it was redesigned as a Super Late Model when NASCAR pulled out.

November 24, 2017: The ABC Committee sends an open letter to the industry stating that it will not approve the bodies at current time, stating a desire to sit in a wind tunnel test and needing the conviction that the prices will be as competitive and affordable as the current iteration.

November 29, 2017: The Pro All Stars Series (PASS) approves the body style for use in competition, even though the bodies have not moved past the prototype stage and would not be available for purchase until fall 2018 at the earliest. The TUNDRA Super Late Model Series eventually followed suit.

January 29, 2018: The ABC Committee pens another open letter stating that the Gen-6 body would not be approved for use in their respective tours at any point during the 2018 season, once again stating its intent to be present for a wind tunnel test and a lock-in of prices.

The most notable quote from that open letter can be read below:

We know some teams are ready for a new look, which we agree with. That being said, we have been discussing price and competitive data with FiveStar since 2015 and recently received aero numbers and pricing for the first time during late August of 2017. Here is where we stand as of today:

A comparative wind tunnel test between the current ABC body and proposed body has been requested. Currently the only aero data available to the ABC Committee, is from a closed door wind tunnel test conducted without any committee members present. We are simply asking for a more transparent test to satisfy all parties involved, as to the parity of the proposed body versus the current ABC design. Since our mid-December 2017 request for additional testing, FiveStar has had zero communication with the ABC Committee.

The goal of this test is to determine how to acquire the closest aerodynamic parity possible, thus NOT forcing our teams to ‘have to’ switch bodies. This is important on multiple fronts, but with no single part from the current approved ABC body being able to be utilized on the proposed body, a complete changeover and adaptation of one’s Late Model would be necessary.

A key point has been to lock the price of the proposed body.

In all likely hood, an approval of this body will create a single provider for this design, thus pricing is and remains an important topic. Additionally, we have proposed a ‘no lightweight’ option, which has been met with quite a bit of push back from the manufacturer. An effort has been made regarding how additional body manufacturers would be able to participate in this program, producing identical components to the proposed Five Star design.

Five Star announced the release of the bodies on Wednesday, October 31.

We are very excited to announce the release of the new 2019 Late Model Body! The new Camaro, Mustang & Camry are all in stock for same day shipping, contact your local Five Star dealer today to place your order!

And once again, the ABC Committee responded with an open letter stating that the body has not been approved for use in their respective tours.

An Open Letter from the ABC Body Committee:
October 31, 2018

The Sanctioning Bodies, Tracks and Special Events (of the ABC Committee) would like to inform all asphalt short track Late Model competitors and teams that the proposed Short Track Body being marketed by Five Star Stock Car Bodies has not received approval of these industry leaders and at a minimum, as it currently stands, will not be recognized by these and many other Sanctioning Bodies, Tracks and Special Events for 2019. The number one priority from these organizations has been to ensure an introduction that does not jeopardize the health of our industry. We are working with the manufacturers to ensure the proper introduction of a new body, and we look forward to announcing the details when the goals of these groups have been met.

Those goals, as were stated in a previous letter, were three-fold:

It hasn’t been stated outright, but the ABC Committee is waiting on AR Bodies to commit to the platform, since at current time, only Five Star has built the Gen-6 body. The ABC Committee would prefer that one company not hold a monopoly over the body-selling market. But from the beginning, AR Bodies, a former ABC Committee signee, would not commit, citing the cost to do so and what it perceived as a lack of need from the short track industry at large.

“AR Bodies has been such a negative influence,” Schultz told Short Track Scene over the summer. “There was no other way but to do this on our own. They don’t want to do a new body. I don’t understand their reason not to do this. I’m surprised they expect the current body to be around forever. So we just decided to do it.”

“We got an indication that they would support the body,” he said. “And then we get these letters… We’re trying to please everyone and we keep hearing about the aerodynamics. We have spent countless amounts of resources and time to make sure it was equal. No one would have agreed to it if we hadn’t. We hired a top person in NASCAR to do it. Kyle Busch Motorsports provided the test car.”

Schultz expressed a willingness to work with AR Bodies, an offer to provide them the mold, or even make them a supplier but recounted a story of being burned by them in the past with the current body.

“We provided them the shape,” he recounted. “That’s where we went wrong. They built their own body. Heated it up in some areas and bragged about their advantage. This program was supposed to be a duplicate. We did this on our own because they wouldn’t do it.”

There was a second wind tunnel test with Ricky Brooks and Eddie Chew present with Five Star officials. And yet, the body was not approved on Wednesday.

So as it stands, AR Bodies is still unwilling to produce their own Gen-6 and Five-Star has proceeded to make the body available despite a lack of ABC approval. PASS has approved the body, but the ABC is waiting for AR Bodies to jump in, hoping to avoid a monopoly on the template Late Model market. 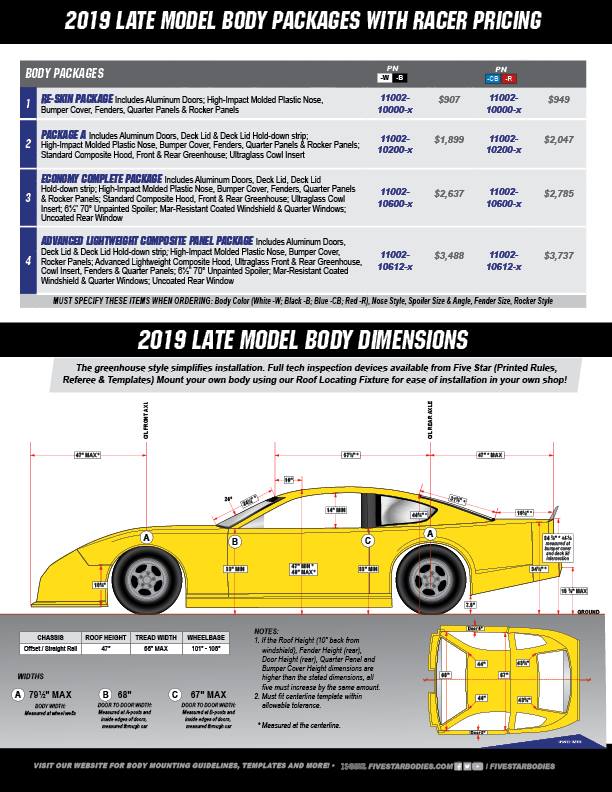