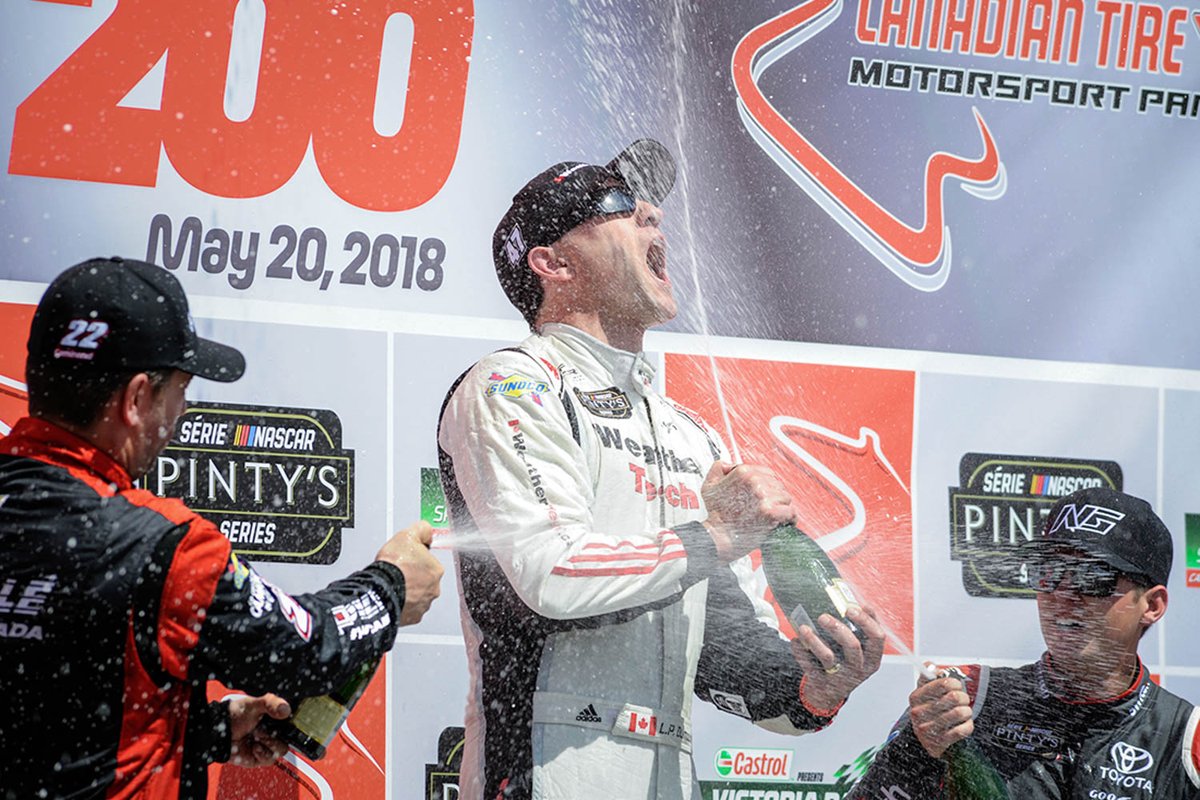 It was 40 races since L.P Dumoulin had been to Victory Lane. And it only took one lap Sunday for him to end that streak.

Dumoulin inherited the lead after last lap contact between Andrew Rangers and Kevin Lacroix, and he drove his No. 47 WeatherTech Canada/ Bellemare Dodge to the win in the Clarington 200 at Canadian Tire Motorsports Park.

For the 39-year-old driver from Trois-Rivieres, Quebec, it was his fifth career NASCAR Pinty’s Series win and third at CTMP. The win also marked Dumoulin’s first win since Trois-Rivieres in 2014.

“My guys worked so hard over the winter months replacing clips and parts on our cars to make them the best they can be and I was so happy to be able to get the win for them and celebrate and give them a reward for all of their hard work over the winter and also last year, said Dumoulin. “I have a very dedicated group that work on our cars and this means a lot to be able to give them and all of our fans a win. Hopefully this is just the first of several this season.”

Dumoulin was in perfect position when the contact on the white-flag lap between Andrew Ranger and Kevin Lacroix in Turn 5 opened the door. The incident knocked Lacroix from the lead and resulted in a penalty on Ranger for his actions.

Marc-Antoine Camirand finished in the runner-up position, while NASCAR Camping World Truck Series driver Noah Gragson come home third. Gragson, a NASCAR Next graduate who finished eighth in the truck race at Charlotte Motor Speedway Friday, became the third American to sit on the podium in a Pinty’s Series event.

Andrew Ranger was initially crossed the finish line in second, but was given a time penalty for his involvement in Lacroix’s spin from NASCAR and was re-classifed in the 12th position.

The NASCAR Pinty’s Series will be back in action on Saturday, June 16 for the Rankin Construction 200 at the Jukasa Motor Speedway in Hagersville, Ontario.