Bonsignore’s second win of the year corrected course for the Kenneth Massa Motorsports team after a frustrating start to 2022. 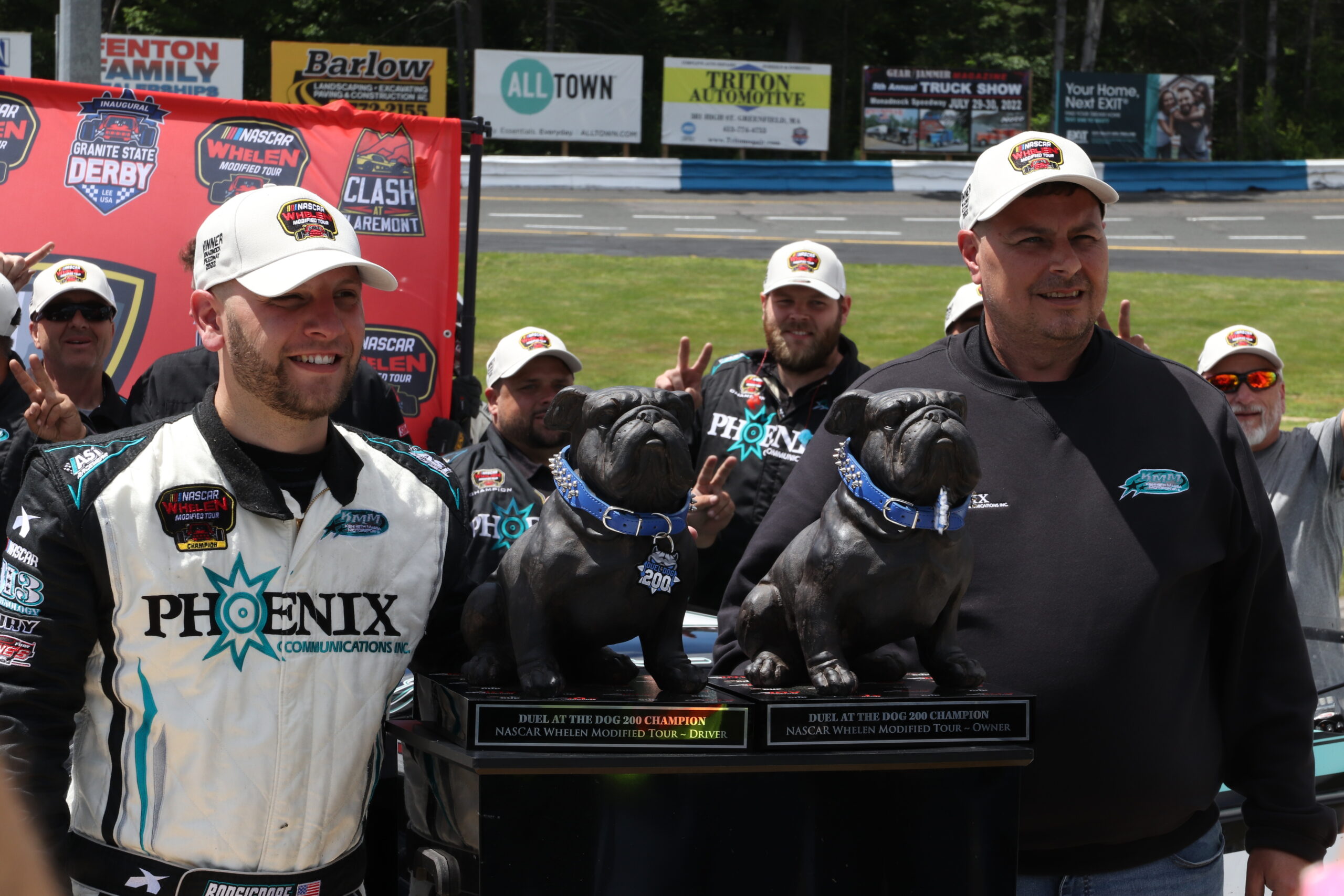 As Justin Bonsignore fielded interviews after his win in last Sunday’s Duel At The Dog 200, the three-time NASCAR Whelen Modified Tour champion kept coming back to a common rejoinder: “I’d rather be lucky than good.”

Because while the latter was tough to argue, the former had been tougher to come by.

Bonsignore slipped past Matt Hirschman in lapped traffic with only three laps remaining, taking the lead en route to his second Tour triumph of 2022.

And after a challenging start to his title defense, the Holtsville, N.Y. veteran appears to be on a better track.

Sunday’s bullring brawl at Monadnock Speedway was the result of surprise showers that soaked the track Saturday evening, forcing officials to move the program to a Father’s Day afternoon affair. Qualifying, interrupted by the rain, was scrapped and the field was set by practice times, staging Bonsignore alongside local racer Matthew Kimball for the green flag.

Bonsignore led the first 17 laps before Matt Hirschman took over at the front. Already a Tour winner earlier this season, and a winner in the Monaco Modified Tri-Track Series event at Monadnock in May, Hirschman had momentum on his side to make him a favorite at “Mad Dog.”

Hirschman yielded to Ron Silk during the race’s opening green-flag stretch, and while a couple yellow flags for single-car incidents slowed the race pace, the former series champion established himself as the driver to beat. Silk, still seeking a first Tour win with Haydt Yannone Racing, led 110 laps and looked to be en route to backing up his points lead with a victory.

Ron Silk led 110 laps and dominated the middle stages of the Duel At The Dog 200, but the former champion would have to settle for third at the finish. (STS/Jeff Brown)

“Big Money Matt” battled past Silk on lap 156, though, retaking the lead and setting himself up for another big win en route to his Superstar Racing Experience debut in a couple weeks. Two more quick cautions set up Hirschman for a battle with Silk and Bonsignore, but the Pennsylvania veteran was able to keep both challengers at bay from the drop of the green.

As the laps wound down, Bonsignore was able to close the gap on Hirschman as the leader dispatched slower traffic. Hirschman caught J.B. Fortin with three laps to go, but coming off turn four, Fortin slid into Hirschman’s path, slowing the leader. Bonsignore dove low down the frontstretch, taking the lead back as Hirschman ducked around Fortin’s slower machine.

Sam Rameau, a multi-time Tri-Track race winner at Monadnock, finished fourth, his best-ever result with the Tour. Fifth was Doug Coby, who had been gunning for a fourth straight win for car owner Tommy Baldwin.

After the race, Hirschman criticized Fortin’s driving in the closing laps, saying Fortin had purposely blocked him in retaliation for contact two races earlier at Lee USA Speedway. Fortin denied any intent, and shared a post on social media shortly afterward in which he said he was struggling with the handle on his car, and merely tried not to wreck the leader with the end in sight.

Bonsignore led the first 17 laps of the Duel At The Dog 200, then emerged in the final laps to lead the last three. (STS/Jeff Brown)

Oddly enough, as Bonsignore observed in his post-race celebration, Fortin hails from the same Long Island town as the race winner.

Intentional or not, an out-of-control race car was an odd vessel through which to deliver Bonsignore the luck he has lacked throughout the season. Since 2018, Bonsignore and car owner Ken Massa have been on a dominant streak that rivals the heyday of title rival Coby. In four years, the driver-owner pairing earned three championships, 19 wins, and finished in the top ten in all but six of their 55 starts.

Then came 2022. Bonsignore broke early in the season opener at New Smyrna Speedway, finishing dead last. No matter; the reigning champ came back at Richmond to win the pole, lead 58 laps and score another win. But at Riverhead, Bonsignore’s home track, gremlins again reared their head early in the race. Bonsignore returned to the race many laps down, finishing 25th.

Bonsignore finished tenth at Lee despite a late-race spin, but he was never in contention for the win. A week later at Jennerstown, he started deep in the field and drove to eighth by the finish, a lap behind the leaders. After five races, Bonsignore was eighth in the championship standings, not bad by most standards.

But by the standards of a driver who has not finished worse than third in points since 2015, it did not live up to expectations.

Traffic was far from the only lucky break that came Bonsignore’s way. Bonsignore pointed out after the race that a piece of pavement had been kicked back into his path in the home stretch, damaging the radiator. Bonsignore may have been fortunate to make the finish at all.

In an odd quirk, Bonsignore is the only title contender to visit the winner’s circle so far, with Coby, Hirschman and Mike Christopher, Jr. all picking up wins this year. A second win goes a long way to get Bonsignore’s season back on the right trajectory.

But to get the rest of the way there, he will have to find a lot more of that luck.