Shaw wheeled a car his father won races in years ago to earn his ninth GSPSS win and his second at “Mad Dog.” 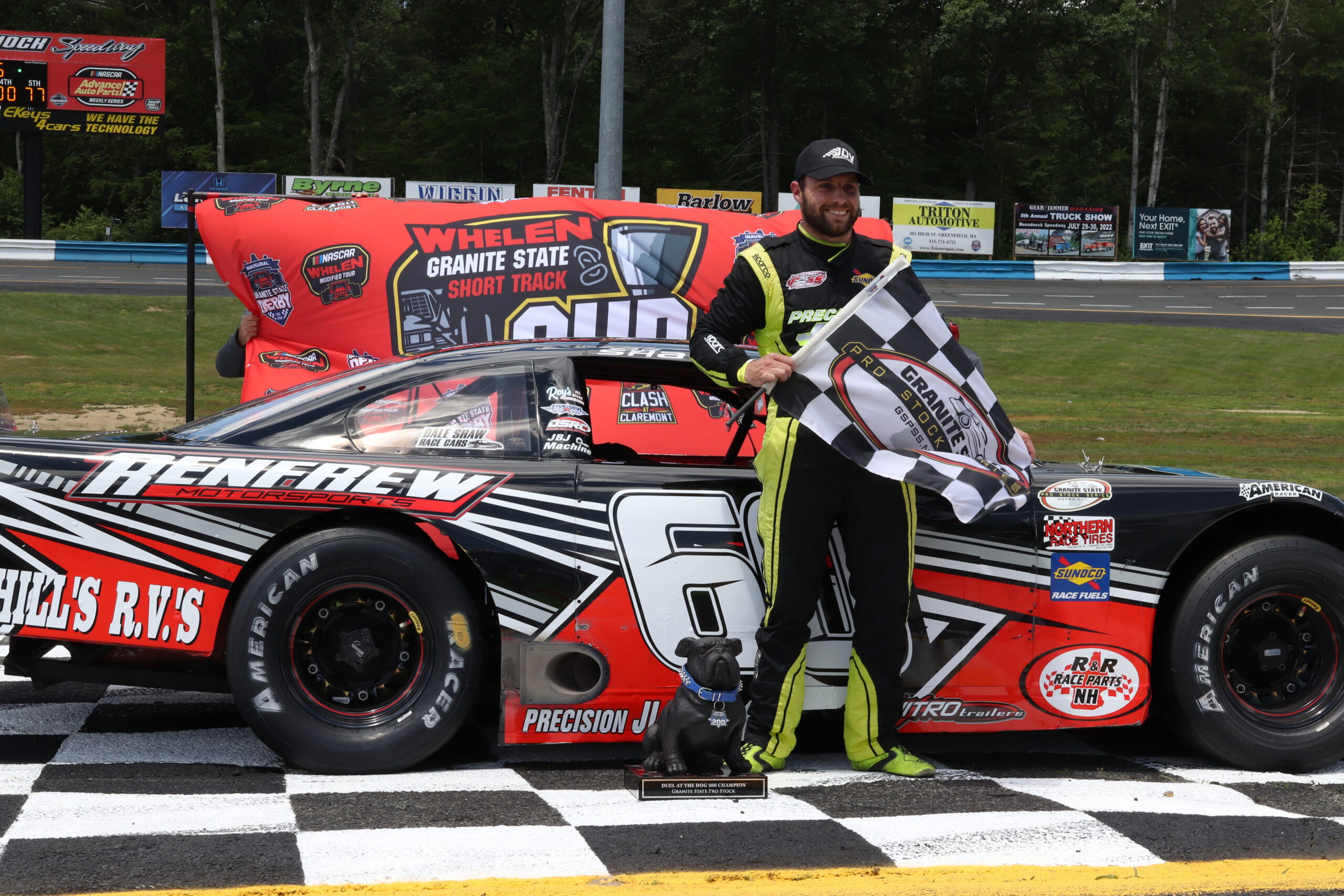 DJ Shaw celebrates his second win of the year and his first under the GSPSS banner. (STS/Jeff Brown)

In the span of forty-eight hours, DJ Shaw went from not racing to racing to not racing…to winning.

Shaw found his way past early leader Dylan Estrella to take his second win at the high-banked quarter-mile in the afternoon’s fendered prelude to the NASCAR Whelen Modified Tour Duel At The Dog 200. And he did so in what was surely one of the oldest cars in the field.

“We had a really good car today,” the Center Conway, N.H. star said in victory lane. “Just wasn’t sure going in, coming back on Sunday, [how it would run] in the daylight.”

Shaw was one of three drivers to make a last-minute trip to Monadnock after an early cancellation of a major event on Sunday. (STS/Jeff Brown)

Shaw was one of three drivers whose weekend plans were diverted to western New Hampshire after the Pro All Stars Series canceled Sunday’s scheduled show at Spud Speedway due to a wet forecast. A cloudy sky through the late afternoon looked gloomy, but only a small patch of green on the radar gave cause for concern.

But with a handful of cars left to qualify for the evening’s NASCAR Whelen Modified Tour featured event, the skies opened up, soaking the track and putting the night’s program into a holding pattern. Officials attempted to get the show going again, but as more rain materialized and temperatures dropped, a decision was made to postpone the show to Sunday.

Five teams packed up and headed out early, their Sundays already otherwise booked. Shaw was one of those who stayed the night.

The five-time PASS North champion started fourth and carved his path through traffic to run second, while polesitter Dylan Estrella set the early pace. Under a long green-flag run, Shaw closed the gap on the Massachusetts rookie. By halfway, Shaw and the rest of the top five were nose-to-tail behind Estrella, who was pinned to the inside defending his lead.

After hounding Estrella for several circuits, Shaw finally made an opening on lap 42, giving Estrella just enough of a nudge to get him off of the bottom. Shaw slipped past and into the lead, leaving Estrella to fend off a handful of fast cars from the Dale Shaw Race Cars stable.

Points leader Joey Doiron was the next to clear Estrella, but by the time he did, Shaw had checked out on the pack.

With no yellow flags to bunch up the field, Shaw cruised to a 4.179-second victory in a race that clocked in just under twenty minutes from green to checkered.

Making Shaw’s ninth career GSPSS win even more notable was that it came in a car built in 2006, a car that Shaw’s father Dale had won with many years ago.

With a little contact, Shaw was able to get Estrella out of the low line, opening the door for his ninth series win and his second at Monadnock. (STS/Jeff Brown)

“This is the first car we’ve ever both won in,” Shaw said, “so that’s pretty cool.”

Doiron finished second, best among the series’ full-time contenders. The 2019 GSPSS champion has finished no worse than fourth to start the season as he seeks another series crown.

Touring rookie Nick Cusack threaded the needle in the closing laps to nab his first GSPSS podium finish. The Beech Ridge Motor Speedway alumnus has improved in every start this year, and a win could be just around the corner.

Polesitter Estrella faded to sixth at the finish. Joe Pastore, making his first trip to Monadnock Speedway after his original Sunday destination was rained out, stuck around an extra night and finished seventh. Vermont’s Josh King was eighth, while Garrett Hall was ninth and defending GSPSS Monadnock winner Angelo Belsito rounded out the top ten.

Luke Hinkley, third in points entering the weekend, was one of the drivers not to return on Sunday, dropping him from the points race. While Doiron still holds an 18-point lead over Renfrew, Cusack now sits third and within grasp of second.

The track known to many as “Mad Dog” is not a regular haunt for Shaw, who has been a PASS regular for most of his career. PASS’ Super Late Models, despite being on the schedule last year and this season, have never turned a lap at the track. But in his three prior GSPSS starts there, Shaw had finished second, second and first. Monadnock’s steep banks are reminiscent of White Mountain Motorsports Park, the track where Shaw cut his racing teeth and won his first track championship in the 2000s.

Despite making sporadic starts in GSPSS competition with the exception of the 2016 season, Shaw’s numbers in the series are stellar, with his nine wins leading all competitors in series history. And as a car builder, Shaw’s rides have been dominant over the last couple years. Chassis built at the Shaw family’s shop have won all four races this year, six of last year’s ten features, and two of the last three GSPSS championships.

One of those winning cars first hit the track before some series drivers were old enough to strap into a go-kart.

Not bad for a last-minute entry.