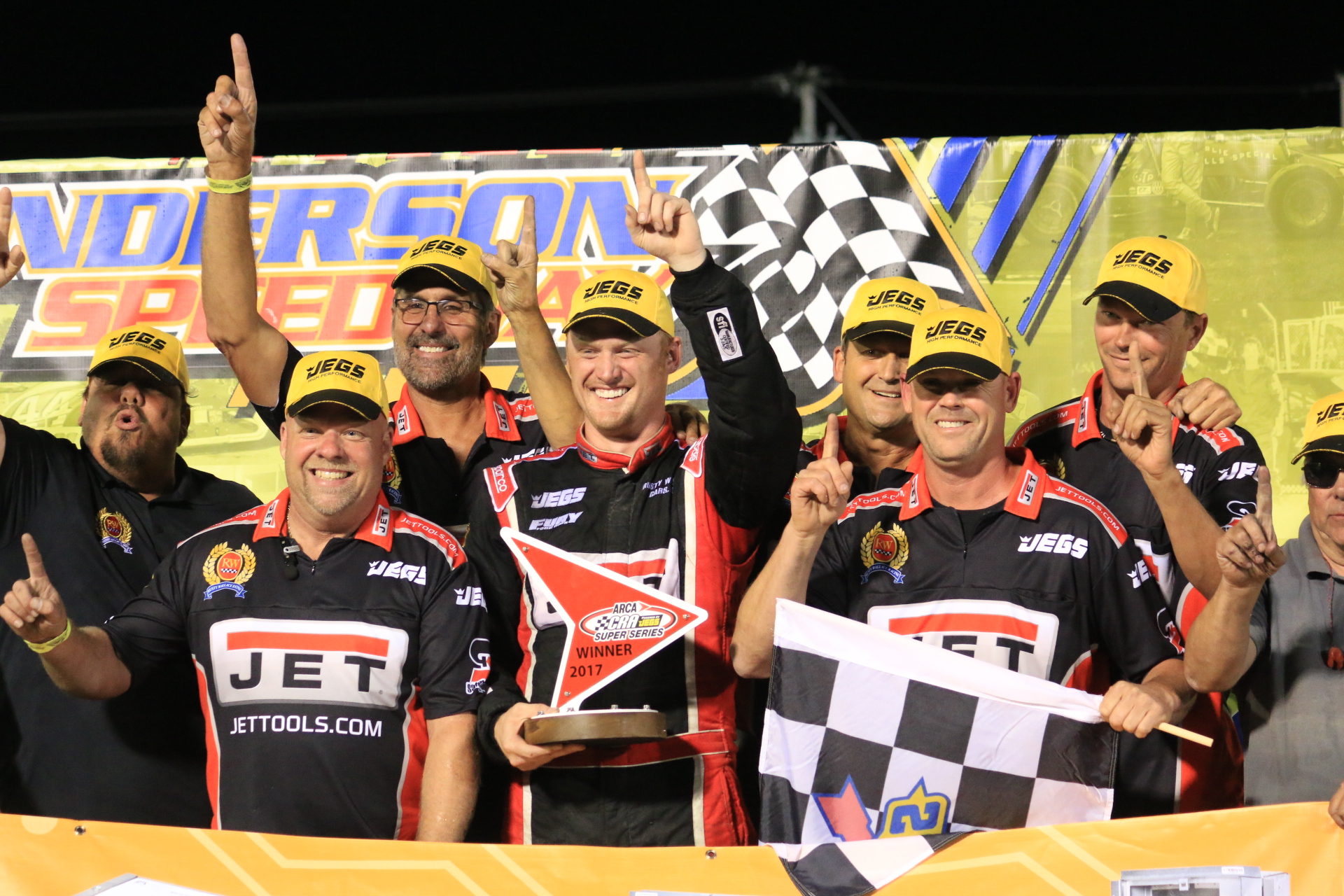 The Redbud 400 was always going to come down to who executed the final bump and run — and on Saturday night at Anderson Speedway it was Steve Wallace in the lead when the clock struck midnight.

Wallace outdueled Raphael Lessard at the storied Indiana high-banked quarter-mile to collect $10,000 and add to a quickly expanding short track resume that already included wins in the Snowball Derby and Clyde Hart Memorial.

Wallace had to hold off Lessard on two different restarts with five laps to go (caution laps no longer counted) and lost the lead to the reigning CARS Tour champion each time. However, he prevailed when it mattered the most.

The first time, Lessard passed Wallace off the restart but a caution reverted the lineup to its previous lap.

Lessard again bested Wallace off the restart, and cleared him the next lap. However, that allowed Wallace to get under Lessard to shove him up the track. Once under Lessard, Wallace gave the youngster a door slam and drove off to the biggest win of his season.

“This race is huge,” Wallace said in Victory Lane. “My family has raced here forever. My dad never won the 400. My uncle never won it. I was talking to Kenny (Wallace) and last time he ran it, he finished second to Dick Trickle.

“So to come here and win it, my first time here, it means a lot. This is a bad ass track. Wild. Beating and banging. Right up my alley.”

Perhaps it was the heat of the moment talking, but Lessard believes Wallace raced him dirty over the final five laps.

“First of all, thank you David Gilliland Racing for this awesome Toyota Camry because it was fun to drive,” Lessard said. “I took the lead on that restart and Steve Wallace did what Steve Wallace do.

“It’s like, we can’t touch him but he can hit us. It is what it is and I’ll remember that for future races.”

Not that Wallace, infamous for his hard-driving style and bombastic temperament cared.

“He can be as frustrated as he wants,” Wallace said. “What’s he expect me to do? Roll over on my back and let him go? I work on all these cars, and my guys do too, and the only way to keep me from a win like that is to shoot me in the head.

The Wallace hip check caused Lessard to fall all the way back to fifth by the end of the race. It was a solid finish buy likely not much of a consolation given the circumstances of his run.

Through it all, former race winner Steve Dorer finished second with a car that had its left side caved completely in. That’s the kind of race the Redbud was on Sunday.

A total of 23 cars took the green flag but only 12 crossed the finish line. A handful of crashes took out several top contenders included reigning winner Dalton Armstrong and Monday’s Money in the Bank 150 winner, Bubba Pollard.

With his triumph, Wallace takes the first stage if the CRA $100,000 Triple Crown. He’ll collect that amount if he can also win the Battle at Berlin on August 25th and the Winchester 400 on October 8th. If a driver can win two out of the three races, they will win $10,000. Otherwise, the driver who earned the most points in the three races will win $5,000.

Obviously that’s the 29-year-old’s plan too.

“For sure, we ran at Berlin on Monday and Bubba Pollard just barely outrun us,” Wallace said. “These cars are bad fast and we’re going to win some more together.”

Complete results from the 51st Redbud 400 can be found below.