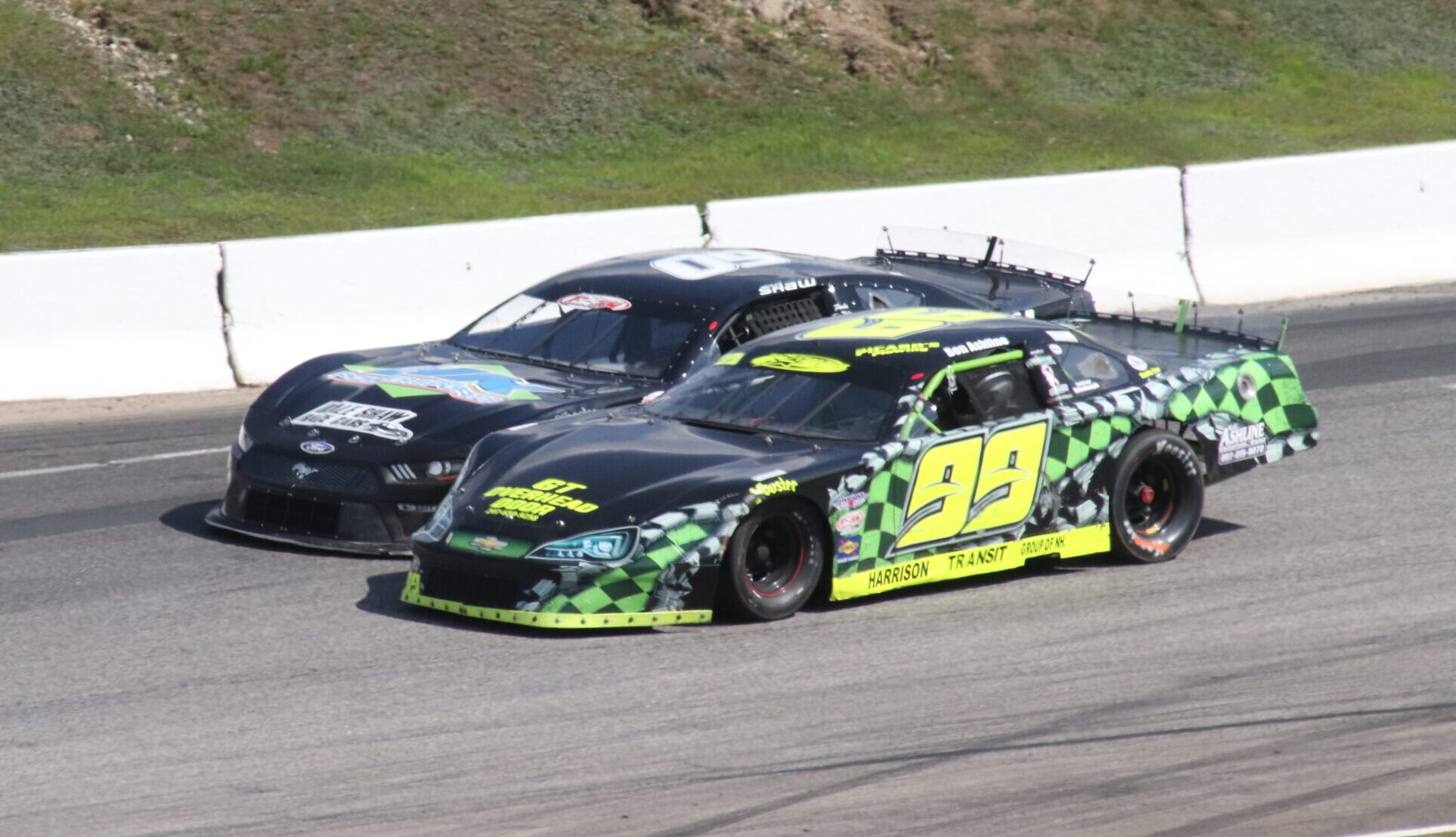 With over fifty cars slated to compete for a starting position in next week’s Oxford 250, Ben Ashline can breathe a little easier.

And in doing so, the Pittston, Me. driver secured a provisional starting berth he can use for next Sunday’s 47th running of New England’s richest one-day Super Late Model race.

To earn his spot, Ashline had to fend off twenty-seven of the region’s toughest Super Late Model pilots, from fellow PASS competitors to Oxford Plains Speedway regulars to all-star outlaws hoping to punch their ticket to the big show.

Ashline, in his first full season of PASS North competition, crossed the line ahead of Derek Griffith, the only driver in the field to have notched a points-paying PASS win this season. Wyatt Alexander, who joined the ranks of the winners with a victory in last Saturday’s Granite State Pro Stock Series event at Beech Ridge Motor Speedway, joined Ashline and Griffith on the podium.

The Open 100 debuted in 2016 as a “non-winners” qualifier for the 250, open only to drivers who had not recorded a PASS win in the past five seasons. Wayne Helliwell, Jr. won the inaugural Open, carrying that momentum to an Oxford win later that month and the Oxford 250 win in August.

The field was opened up in subsequent years to allow all interested drivers, but the purpose of the Open has remained the same, with Oxford 250 provisionals awarded to the race winners as well as the top-performing non-winners in the field.

The 2020 schedule had not initially included an Open, with twin 75-lap features at Oxford taking the Open’s usual Independence Day slot on the schedule. The race was added only a couple weeks ago, at the expense of the off-weekend usually granted to PASS touring and Oxford weekly competitors. Dave Farrington, Jr. and Curtis Gerry, both winners of PASS races in 2020 and sitting first and second in weekly points, were among those who skipped the Open to prepare for the 250 instead.

Ashline knows firsthand the challenge of making the Oxford 250 field. A hard crash in his qualifying heat for the 2012 running not only kept the young racer out of his fourth 250, but kept him off the track for the rest of the season. Ashline, a rising star on the American-Canadian Tour, returned to the series in 2014, but disappeared from the touring scene as he took a greater role building cars for Jeff Taylor’s Distance Racing Products.

Ashline continued to make spot starts in his Late Model, earning back-to-back wins in 2018 and 2019 in the Coastal 200 at Wiscasset Speedway. Following the Coastal 200 win, Ashline teamed up with Ajay Picard, taking the wheel of Picard’s Super Late Model and making his PASS debut at Oxford with a sixth-place finish. At the Oxford 250 a few weeks later, Ashline drove from 26th on the starting grid to finish seventh in his first 250 since 2011 and his first in a Super Late Model. The next week, Ashline drove Picard’s car to victory in the Boss Hogg 150 at Wiscasset, becoming the first driver to win the Coastal 200 and the Boss Hogg 150 in the same year.

Still racing Picard’s distinctive black-and-green #99, Ashline is one of nine drivers to attempt all eight PASS events this year. With only three top-ten finishes so far, the success of last year has been hard to replicate. But with fourth- and eighth-place finishes in the last two races, plus Saturday’s Open win, it seems the results are trending in the right direction.

As many as four provisionals were up for grabs Saturday, with a full-purse provisional and a half-purse provisional awarded to the top two drivers from the PASS touring and Oxford weekly ranks. Ashline earned the top provisional for the touring teams; Tim Brackett was the highest Oxford regular in points, with either Brandon Barker or Alan Wilson likely to take the second Oxford provisional. Of course, drivers are still obligated to make a qualifying attempt through the heats, consis, and B-feature.

Only a week remains before the teams return to Oxford for the 47th Annual Oxford 250 on Sunday afternoon. Fan attendance is still heavily restricted in the state, and there are no further ticket sales for the 250; however, Speed51 will be providing live streaming coverage of the event.