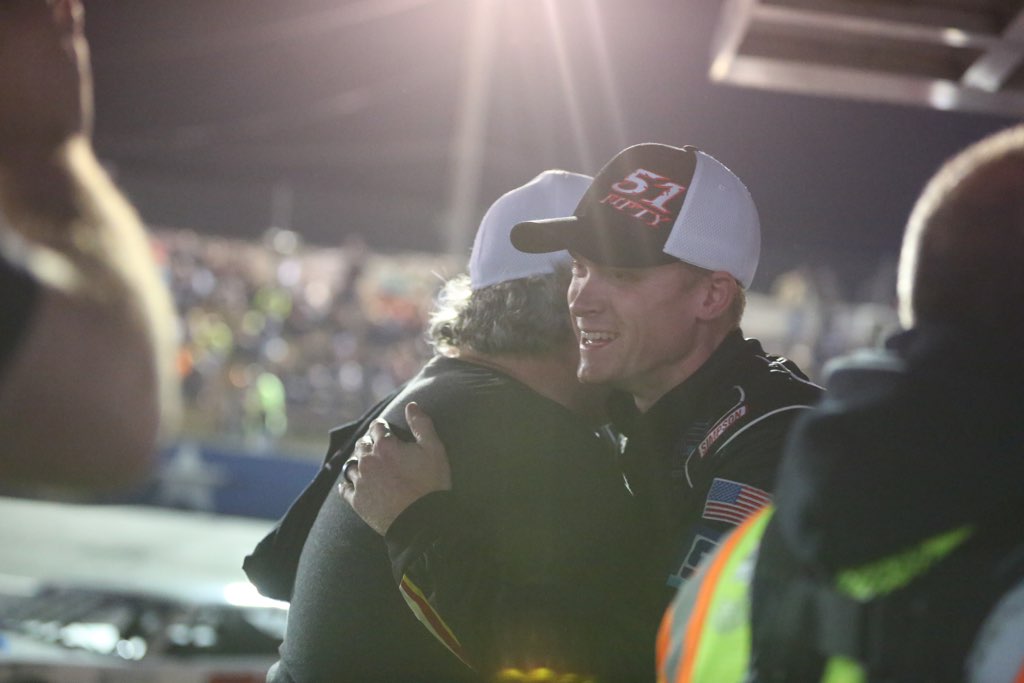 Derek Thorn picked up the victory in the Allen Turner Hyundai Snowflake 100 at Five Flags Speedway on Saturday night after passing Augie Grill in the closing laps of the race.

Grill started on the pole and led the first 64 laps of the race before the four-time Spears SRL Southwest Tour champion roared past him.  While Grill rallied late and tried to race his way back to the lead, as he did in Friday’s Modifieds of Mayhem race, Thorn was able to pull away and score the victory – his first in the Snowflake 100 and his second career win at Five Flags Speedway.

“If you would have told me we’d win the pole this weekend in the Snowball Derby and win the first race in the Snowflake 100, I can’t believe it,” Thorn said in victory lane. “We were alright until the mid-portion of the race.  Augie was getting there, and I knew Bubba was just saving.  That car’s so dang fast.  It was lightning quick there at the end.”

Augie Grill had fallen out of the top-two but was able to rebound after fading and race his way back to second.

“That was pretty wild,” Grill said. “Three red flags and caution after caution after caution.  I just wanted to get going green.  I’m sure Derek and Bubba are the same way.  Let’s just race.  All this wrecking and fires and all that, that’s not racing.  Derek caught me napping there on that restart and got a nose under me.  I think we had about dead even cars.  I needed to be in front of him, not behind him.”

Sammy Smith, who won the championship in the World Series of Asphalt Stock Car Racing at New Smyrna Speedway earlier this year, finished in third.  After pitting early in the race, Justin Smith raced his way to a fourth-place finish, while Stephen Nasse rounded out the top-five.

The race was halted for a lengthy red flag on lap 54 when a fuel cell came off of Jarrett Parker’s car and erupted in flames after Justin Bonnett ran over it.  Two other cars were involved in the incident, which caused concern.  Bonnett was taken to a nearby medical center but was alert and conscious.

The fuel cell from Jarrett Parker's car got dislodged and this was the result.

Safety team was on it pretty quickly. pic.twitter.com/LdXqwneZ6K

Results from the Snowflake 100 can be seen below.