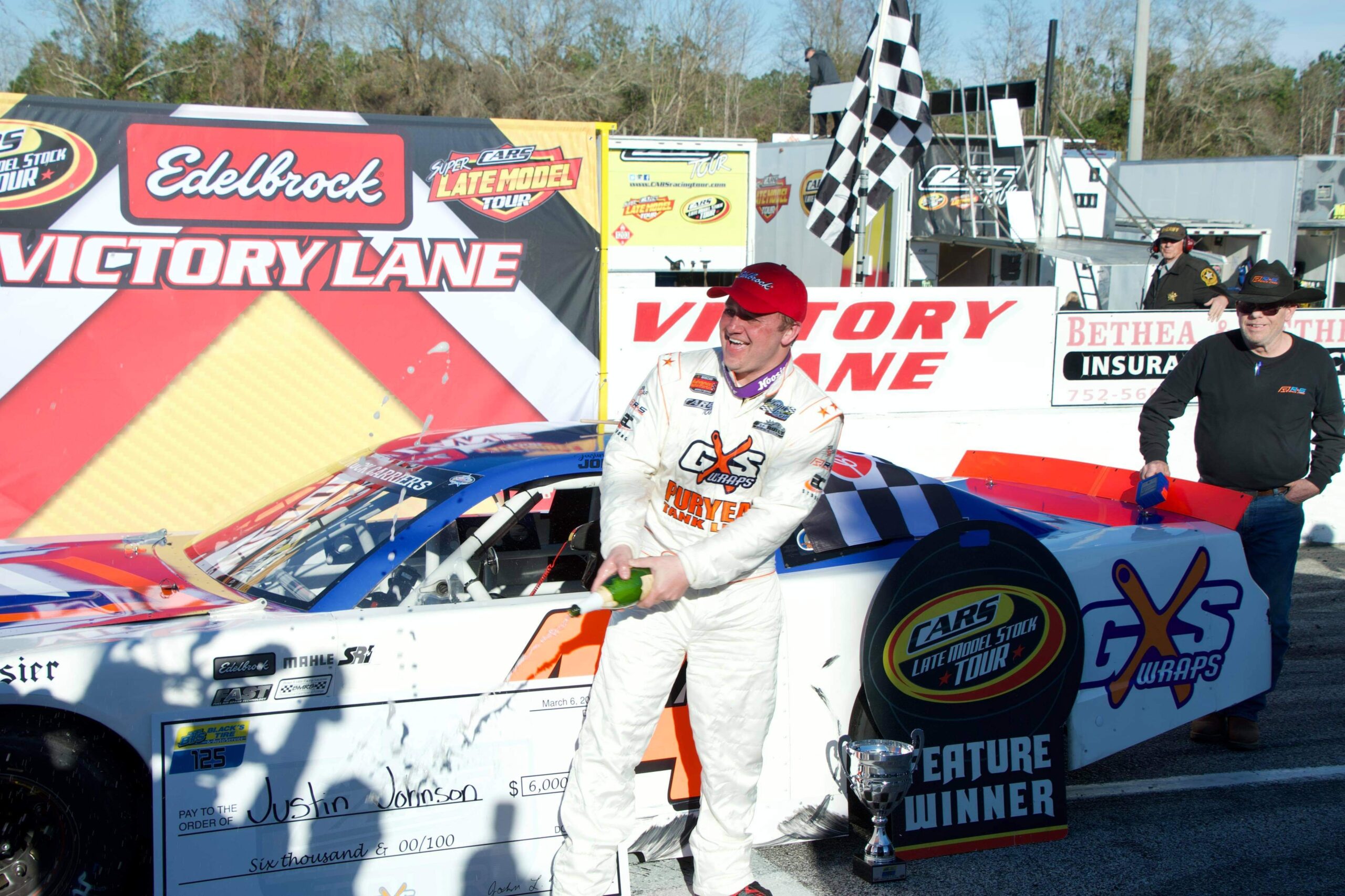 Justin Johnson caught Layne Riggs at his most vulnerable on the final corner of the final lap to win the CARS Late Model Stock season opener on Saturday afternoon at Dillon Motor Speedway in South Carolina.

Riggs had led nearly every lap since taking the top spot from Timothy Peters on Lap 6 but was plagued by two issues at the end: lapped traffic and not realizing how many laps were left over the final several laps.

Riggs was told ‘five laps to go’ with six laps to go and ran into side-by-side lapped traffic coming to the white flag. He either wasn’t told ‘white flag’ or just completely missed it while trying to navigate the maze of traffic with Johnson directly behind him.

It was a chaotic finish with the leaders side-by-side down the backstretch after clearing the slower cars. Johnson drove a higher line into 3 and forced Riggs into the marbles. It was either the lack of grip or slight contact, but Johnson was able to win the drag race down the frontstretch by 0.085.

How Justin Johnson won the 2021 CARS Tour opener on the final lap from Layne Riggs pic.twitter.com/149x97mlxC

It wasn’t the first time Johnson would have initiated contact, pushing Riggs up the track in 3 and 4 coming to 20 to go and briefly took the lead, but Riggs took it right back in the next corner and reemerged with the top spot.

Johnson conceded that Riggs was better on Saturday and he was going to do nearly whatever it took to win short of wrecking the second-generation racer.

“I knew I didn’t have enough rear tire to complete the pass, honestly,” Johnson said to Short Track Scene. “I don’t like to win aggressively, but I would have expected the same thing.”

Riggs had no problem with how the final laps played out, congratulated Johnson in victory lane, and agreed that he would have approached the final laps the same way if he were in second. 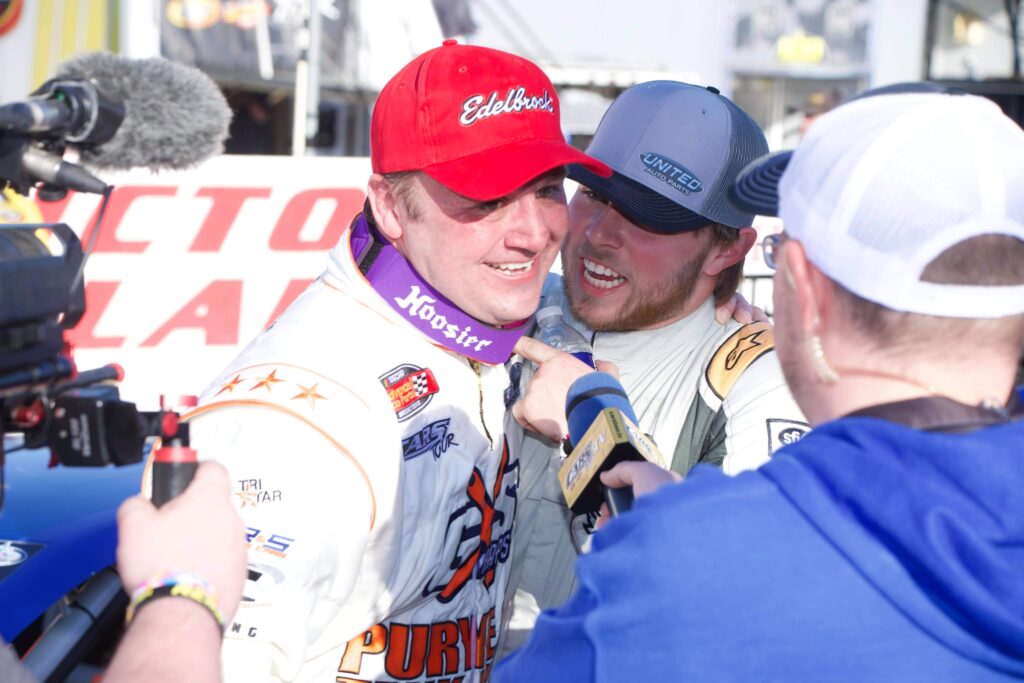 “We’re both trying to win the race, and you just have to expect the same thing (if the roles are reversed) next time,” Riggs said.

The bigger issue for Riggs was the miscommunication thinking he had at least one more lap to determine the outcome with Johnson.

“He said five to go earlier, and he was so focused on the lapped cars, that we lost track of the laps,” Riggs said. “I didn’t know it was one to go until the backstretch. It was a good race with Justin. I’ve been racing with him for a long time. I’m really happy for him.”

Johnson is the 2017 winner of the Thanksgiving Classic at Southern National Motorsports Park, but this is his first victory in CARS Tour competition in his 30th start.

He has a pair of thirds at Anderson and Myrtle Beach in 2017 and 2018. He ran the full schedule for the first time last year and finished 11th, but will open this season with the championship lead after winning the Blacks Tire 125.

He really wanted this one.

“My goal was to be just close enough to be a little aggressive,” Johnson said. “I knew I would be able to get beside him, but I didn’t know if we could beat him back to the line. The lap cars, I know they’re racing for position, but I thought they had cost me my opportunity.

“I hadn’t been on the high side most all day, but I dropped it off in Turn 1 about as hard as I had all day, and Layne was tight off, and I just had a heck of a run down the backstretch. When I saw daylight on the inside, I wasn’t going to give it up.”

Johnson only found himself in that position because Peters gave up second on the final restart with 30 to go. After spending much of the race in the tire tracks behind Riggs, Peters sailed into Turn 1 and it didn’t stick on the outside.

Peters had been dealing with a gradual oil leak for about 20 laps, that didn’t prove problematic until he slowed down, and it soaked his tires.

Peters lost four positions on the restart, including second to Johnson, and had to settle for fifth.

“I went into the corner and nearly went around on me,” Peters said. “It was a lot of fun and I had a lot of run racing Layne. I was just trying to bide my time a little bit. These CARS Tour guys are just very competitive. We had a good car all race long.”

It was the second race in 24 hours that Peters had competed in across two opposite coasts. He raced in the Truck Series for Rackley WAR at Las Vegas Motor Speedway and landed in North Carolina at 6 a.m. with just a few hours of sleep before first practice on Saturday morning.

“I just really love Late Model Stock racing and the CARS Tour,” Peters said. “We’re working hard on getting our program better at Nelson Motorsports and I’m not going to turn down any chance I get to race.”

Sam Butler completed the podium ahead of defending champion Jared Fryar and Peters. The only caution came on Lap 95 when Craig Moore suffered a puncture that brought his car to a stop in Turns 1 and 2.

The CARS Tour season resumes on Saturday March 20 with the MTP Tire 300 at Hickory Motors Speedway in North Carolina with the second Late Model Stock race and the season opener for the Super Late Model division.