Watching over each of the crew chiefs in the Room of Doom following the 53rd Annual Snowball Derby, you couldn’t help but notice that one was aesthetically different than the rest.

To varying degrees, each of these mechanics are put together enough, at least by pavement Super Late Model standards. Suss and Senneker could easily pass for NASCAR national touring crew members with their poise, pedigree and appearance.

Ricky Turner less so, of course, but he always looked his most polished next to the white No. 9 while working with Chase Elliott over the years.

This is written with no disrespect to any — some of the greatest collection of short track minds in the country — but they had to have wondered at least once on Sunday night how they got beat so decisively by the unorthodox and disheveled Toby Nuttleman.

Sure, the technical inspection process led by Ricky Brooks has earned this sort of ominous aura over the past 15 years, but there was absolutely no chance the No. 91 driven by Ty Majeski and owned by Brad Mannstedt was ever going to fail inspection.

Nuttleman is just too precise, too meticulous, and too thorough to be caught off guard by anything about his car.

That was especially true about this particular machine, the same one that Majeski dominated the 2019 Snowball Derby with before it was junked from the lead on an overtime restart under the most dubious of circumstances. He had led 140 laps but had nothing to show for it. It was the latest defeat in a series of five attempts that the 91 was amongst the cars to beat.

And worse, the car was completely destroyed.

“I was so mad,” Nuttleman said. “I took it home. I picked the body parts up on my way home and I had it fixed by Christmas and it just sat there all year. I had the motor and everything in it just like that.”

It didn’t race again until the 2020 Snowball Derby.

Nuttleman is such a low-key guy, but by his standards, he was mad over what transpired to his team and driver that night.

“He was angry for a long time,” Majeski said, but then paused. “I don’t want to say he was angry, because that’s not fair. He was just disgruntled. It’s really hard to put a race car out there that is so much better than the field — and it hurt to not win with it.”

One year later, with the same car, Majeski and Nuttleman put the hurt on everyone when it mattered the most.

Knowing what he had with this same car last year, Majeski spent the entire week working on his qualifying trim, hoping to win the pole and take a shot at doubling his purse payout with the Phoenix Construction Back to the Front bonus.

He qualified third but fell outside the top-10 by Lap 100, and suddenly, Majeski thought they had made a terrible mistake.

“I was worried,” Majeski said. “I’m like, man, we did not work in race trim enough. After that first run, I’m like, ‘I am never making this mistake again.’

“Thankfully, we were able to make good adjustments all day. The track rubbered-in a little bit, took the abrasiveness away from our tires, and it was much, much better that second run.”

The race was actually won on Lap 282, two laps before the final competition caution that is mandatory after every 75 consecutive green flag laps. Majeski had spent the previous 75 laps chasing down a dominant Derek Thorn and passed him right before the break.

That made him the control car for the final two restarts.

This was important because Thorn actually got the jump on Majeski from the outside on the final restart with five to go, and briefly took the lead. However, Majeski had the bottom and was able to nudge the Campbell Motorsports No. 43 out of the way.

Behind the Ty Majeski, Derek Thorn Battle that Decided the Snowball Derby

He drove away and completed one of the best personal redemption arcs possible.

It was an epic conclusion, and a wild way to win the Snowball Derby, but not the way the 26-year-old envisioned it in his daydreams.

“Honestly, you just hope you’re just driving off into the sunset and there’s no one within a straightaway over the last 50 laps,” Majeski said. “That’s how you dream of it.

“But this one is going to make the highlight reels, I guess. Derek had the best car pretty much all weekend. His car had tremendous speed and he might have paid for it a little on the long run. We were able to get to him right before that last controlled caution and that was the difference.”

But still, this is two years in a row that these guys had the car to beat in the biggest race of the year against the likes of Rowdy Manufacturing, Senneker Race Cars and FURY Race Cars — many of these teams wrenched by NASCAR engineers and driven by national touring drivers.

They got beat by an ace driver who still hasn’t gotten a true shot in NASCAR, a spotter essentially working for Old Styles and an unassuming crew chief with the messy sweatshirt, low voice and unkempt hair. 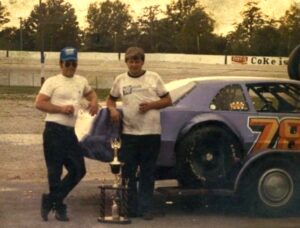 Nuttleman first became involved in racing almost 40 years ago, first on snowmobiles, and then following Steve Holzhausen onto the short track scene. He retired from Webster Lumber in 1991 and cashed a 401k to chase the All Pro Super Series championship.

In Majeski, Nuttleman has found more than just a driver, but legitimate family.

“Ty Majeski is just phenomenal,” Nuttleman said. “He just does the best with whatever he’s got. I mean, the kid just doesn’t ever give up. It’s amazing.

“I got three daughters and I love him. He’s like the son I’ve never had. We probably talk four or five times a week and it’s a bittersweet win.”

They go snowmobiling together during the off-season.

“I hope he gets a chance higher up, because he’s worked so hard for it the past few years,” Nuttleman continued. “If for whatever reason it doesn’t work out, we’re going to keep working and racing against the best because that’s what Brad and Nancy allow us to do.”

Mannstedt grew up with short track racing in his blood because his father financially supported Trickle’s legendary exploits, leaving his son wanting to become a race car driver himself, something that never materialized.

“I wanted to race, and my dad wanted me to be a steel fabricator,” Mannstedt said. “He told me there could be only one Richard Petty, and Mannstedt followed in the family business.

He’s now the proprietor of Ted Mannstedt & Sons, but also continued his dad’s legacy in supporting this generation’s Trickle — Majeski and the No. 91 team.

Mannstedt first became aware of Majeski during Oktoberfest in 2013 at La Crosse Fairgrounds Speedway in West Salem, Wisconsin. He was raw, but extremely talented, and everyone seemed to believe in the raw potential.

After that race, Nuttleman ran a vision by Mannstedt but it was a risky proposition.

“I went to the race shop a few weeks later and Toby has what he calls a vision, it’s always a vision, and I asked what he needed in sponsorship for it,” Mannstedt said. “He says, I’m putting together this car and it’s something I’ve never done before and it’s either going to be really fast or it’s going to fall on its face.

Going back to a childhood spent wanting to race, Mannstedt had always wanted to be involved with a team at the ground level and sought permission from his wife.

“She said, ‘you’ve always wanted to do this, so are you going to wait until you’re 75 years old,’ and we decided to do it,” Mannstedt said.

But there were two conditions: The cars would be built by Nuttleman and they were going to take Majeski to Victory Lane.

Seven years later, they’ve won over 100 features all across the country, including some of the biggest races in the discipline.

“There’s no team in the country that travels the way they do and are just as competitive wherever they go,” Elliott said after finishing third to Majeski and Thorn. “There was no one who hadn’t won this race that deserved it more than those guys, and I’m incredibly proud of them.”

“That’s why this works.”

Majeski will have another shot at the highest levels of the discipline. He wants to join Elliott in the Cup Series someday. His two most prominent opportunities to date were ill-fated and ill-timed. The 2018 No. 60 Roush Fenway Racing Xfinity Series car was cursed by every definition. His opportunity this past year with Niece Motorsports in the Truck Series came after a technical alliance with GMS Racing expired.

“It just wasn’t the right timing,” Majeski said. “That’s so much of what you need in this sport. I can’t say enough about (ARCA Series team owner) Chad Bryant because he saved my career.

“He gave me those chances in an ARCA car in 2019 and we won three of them. I had to make the most of that opportunity and it opened the doors for a full-time Truck Series ride. Obviously, that obviously didn’t go as well, either.

“But it’s how you respond to adversity that makes you the race car driver and person you become,” Majeski said. “I think I’ve learned a lot about myself and what I needed to mentally prepare for those opportunities.

But back to Nuttleman for a second.

How did this ragtag crew, one that literally fields car out of a Midwestern farm barnyard, and a group that Mannstedt says ‘looks like a bunch of pig farmers from Wisconsin’ travel down to Pensacola and beat some of the most traditionally professional teams in the country?

“Toby cares about two things in his whole life, and I don’t mean like family and friends, but materialistically,” Mannstedt says. “Snowmobiling and racing. That’s it. That man could care less what he eats, what kind of vehicle he drives, the home he lives in and what clothes he wears.

“What you think of him, it simply does not matter to him. His love of racing is so embedded. I never met anyone who is so singularly focused on one thing like he is racing.”

Nuttleman is quick to give Majeski credit too.

He believes Majeski should be racing on Sundays, not only for his talent behind the wheel, but also his mechanical engineering degree outside of the car and his ability to provide feedback.

There are those in the short track community that sometimes roll their eyes when you draw the parallel from Trickle to Majeski. It doesn’t matter that Nuttleman and Mannstedt both raced with Trickle before linking up with Majeski. It doesn’t matter that Majeski often races with an engine that features a bottom block that Trickle used in his final races. The first 100 wins in seven years didn’t sway everyone.

But the comparisons were validated with the Tom Dawson Trophy on Sunday. It’s the crowning achievement for Mannstedt, Majeski and certainly their car builder.

“I never would have thought it could get this big,” Nuttleman said. “You have the best of the best here, two of the best Cup drivers, and to beat them here is just an incredible feeling. I don’t know how to explain it.”