Much like his father before him, Jonathan Shafer wants to race a little bit of everything, but also has the work ethic to do it the right way.

The 14-year-old son of long-time Sprint Car and NASCAR veteran Todd Shafer will compete in the CARS Tour this season for Nelson Motorsports — serving as a teammate to two-time and defending champion Bobby McCarty.

That is in addition to a part-time dirt midget schedule with Keith Kunz Motorsports.

Shafer will drive the No. 2 Toyota Camry.

“I’m ready to go and can’t wait to drive the Nelson Motorsports Toyota Camry in the CARS Tour this season,” said Shafer in a press release. “We had a good test last weekend at Southern National Speedway and with the help and experience I have on this team I couldn’t ask to be in a better situation as I begin racing late models full time.”

Shafer has earned a reputation as a willing shop hand — not just having his family bring a check to drive a race car on a weekly basis.

“One thing my dad did with me from the beginning was teach me how to work on the race cars,” said Shafer. “If I was going to race, I had to also work on them and I really enjoy it. I think it will make be a better communicator to my crew during races and ultimately make me a better driver.

“Working on your own car should give you a better understanding of what it needs to be in contention for wins every time you’re on the track.” 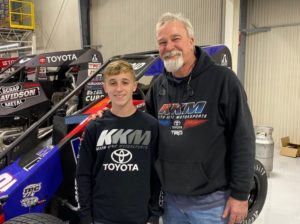 Shafer has already gained some valuable experience in a Late Model when he competed in the Fall Brawl at Hickory Motor Speedway in 2019 finishing sixth. Peters is excited to work with a young driver that has the mechanical understanding that Shafer has shown.

“Jonathan is already showing how talented he is behind the wheel and I can’t wait to work with him this season,” said Peters. “He’s already proven he can drive a race car and it’s our job to get him comfortable in a heavier late model as quickly as possible.”

Although he’s yet to race with Nelson Motorsports, Shafer has set some realistic goals as he begins the 2020 season.

“I just want to finish races and bring the car home in one piece,” he said. “Then as I learn I want to score top-10 finishes and then move up to top-five and top-three finishes this season.”

The CARS Tour schedule begins on Saturday with a 150 lapper that pays $10,000-to-win at the Southern National Motorsports Park at Lucama, North Carolina.