Contact in traffic sent leader Johnny Clark for a spin and opened the door for Butcher to become the first Canadian to win New England’s biggest race since 1995. 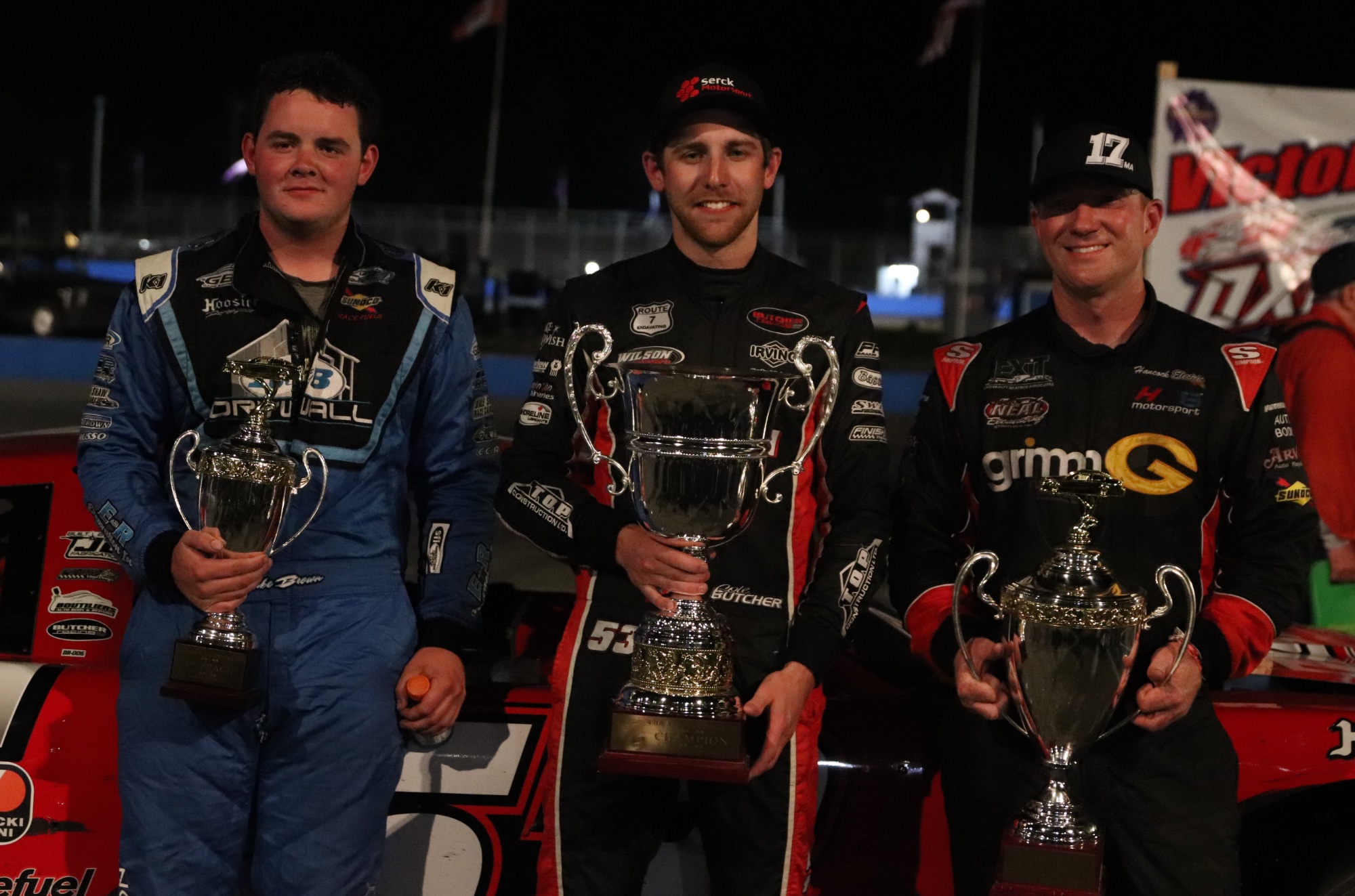 Third-place Gabe Brown and runner-up Eddie MacDonald had nothing in the closing laps for Cole Butcher, who won the 49th Oxford 250. (STS/Jeff Brown)

The last time a Canadian driver won the Oxford 250, Cole Butcher was still a year away from being born.

The two-time East Coast International Pro Stock Tour champion broke that dry spell Sunday night, crossing beneath the flagstand at Oxford Plains Speedway to win the 49th running of New England’s richest Super Late Model event. And in the thrill of the moment, the young Nova Scotia native could be forgiven for overlooking the historical significance.

“It’s pretty cool,” Butcher said after his milestone victory. “I don’t know who the last Canadian was to win it…but we’re the most recent one.”

But Butcher’s victory was not without controversy, as contact with eight laps to go handed him a lead he would not relinquish.

Sunday’s race was the tenth running of the legendary $25,000-to-win event under the sanctioning of the Pro All Stars Series, an arrangement that retains the race’s national prominence while keeping a distinctive local aura. Sixty cars made the attempt to qualify through five heats, three consis and a last-chance feature, with local heroes racing their way into the field and former event winners left on the sidelines.

Butcher’s door reflects the wear and tear of the 250-lap contest. (STS/Jeff Brown)

Curtis Gerry, a local racer and a former 250 winner, started on the pole, but Joe Pastore hustled around the track champion at the drop of the green. Pastore, a part-time PASS racer and former weekly star at Beech Ridge Motor Speedway, led the opening stint through a series of quick yellows.

Gerry pressured Pastore for the lead after a lap-50 restart, but the 2017 winner spun a few laps later, moving defending race winner Cassius Clark to second. With lap-leader money on the line, Pastore held tough out front, pinning his car to the inside to keep Clark and Trevor Sanborn at bay.

A new threat emerged in lapped traffic, though, as Max Cookson moved to second. The rookie Super Late Model ace and weekly points leader ran down Pastore, making the pass for the lead on lap 81 and pulling away from the field. When a caution flag flew on lap 102, Cookson and Pastore stayed on the track as Joey Doiron and others came to the pits for service. Doiron, one of the favorites to win, lined up just outside the top ten for the restart.

Max Cookson, in his first-ever 250-lap feature, led early on and drove a smart race to finish fifth. (STS/Jeff Brown)

Cookson held his ground on the restart while Pastore slipped back in the treacherous outside groove, with veteran Ben Rowe moving to second. A caution one lap shy of halfway opened the door for an alternate pit strategy, with Rowe, Trevor Sanborn and a resurgent Gerry all making stops under yellow. Clark pitted once again under yellow before retiring from the race altogether.

Eddie MacDonald, who was slowed on the first lap of the race with a flat tire, cycled through to second, making quick work of Cookson and building an advantage on the fast rookie. When Jeff White’s spin brought out the yellow on lap 142, Cookson made his pit stop at last.

MacDonald continued to lead under green, with Calvin Rose, Jr. and five-time PASS North champion DJ Shaw settling into second and third. Early leader Pastore, who gambled on a later caution for his fuel stop, came up short on his strategy, running the tank dry and bringing out the caution flag himself on lap 180.

MacDonald, Butcher and Doiron were among those to pit late, cycling Rose and Gerry back to the point with Gabe Brown and Johnny Clark behind them. Clark, the 2020 winner and reigning PASS North champion, wasted little time getting to the front, making the high line work to take the lead on lap 186. Brown, who was caught a lap down early in the race, settled into second. Doiron, who had battled through traffic, slipped past Sanborn on the high side and took third place with fifty circuits remaining.

Out front, though, Clark was in command, looking like he was en route to his second Oxford 250 win in three years after several years of trying.

The stalled car of Jeff White prompted a caution on lap 214, bunching up the leaders with under 40 laps to go. Clark pulled away from Brown on the start, but Doiron was caught up in the high groove and dropped out of the top five. Butcher slipped past Cookson and into third as the caution flew again for a multi-car incident that eliminated Bubba Pollard.

Clark once again cleared Brown on the drop of the green with 30 laps left, but Butcher battled past Brown for the runner-up spot. With laps winding down, Clark started working through lapped traffic, with Butcher shaving time from the Maine veteran’s advantage.

Eight laps remained on the scoreboard as Clark closed in on Jimmy Hebert, the 2020 American-Canadian Tour Late Model champ making his Oxford 250 debut. As Clark slowed behind Hebert, Butcher kept rolling, pushing the race leader around in turn four and driving through with the race lead.

The caution flew as Clark gathered up his car, making it to the line in fourth.

Clark was fuming after being turned from the lead with eight laps remaining. (Photo courtesy Tom Morris)

Butcher lined up with Gabe Brown to his outside and MacDonald in third, keeping Clark from having a clear shot at swift retribution. The initial restart was waved off, but when the field got going again, contact between Sanborn and Rose deeper in the pack left the two drivers with damage and brought out another yellow.

MacDonald had inched ahead of Brown on the start to take second, but Brown was able to reclaim the position under green as Butcher drove away. With two laps to go, Butcher seemed to have the race sealed up, but another spin for Bubar brought out one more yellow flag for a final duel to the checkers.

Butcher defends the lead from Brown and MacDonald on a late-race restart. (STS/Jeff Brown)

Butcher dispatched Brown on the restart, then drove off to win one of the biggest races of his career, and most notably his biggest in the United States.

“Johnny got into the lapped car up there and I had no place to go,” Butcher said. “It was not my intention to get into him. I was ready to settle for second, or whatever happened happened.

“So I apologize to him. Lots of respect for each other.”

Brown, the 2018 Oxford track champion and a first-time winner at the speedway in July, overcame his early spin to finish third, his best by far in four starts in the big race.

Crossing the line fourth was Johnny Clark, who signaled his displeasure with Butcher with a bumper slam on the frontstretch as his supporters responded in kind from the grandstands. Clark exited his car briefly, but ultimately returned to the pits as the specter of a post-race penalty hung heavy in the air.

Cookson, the Super Late Model rookie who had never run a 250-lap event in earnest, finished fifth in his first experience in the endurance race. “There was really two strategies tonight,” he said. “Some guys came around at lap 100-ish and took rights, and I chose to stay out and took all four at lap 142. Cole picked the winning strategy tonight.” 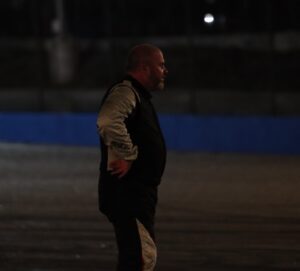 A furious Johnny Clark ponders his options on the frontstretch before returning to the pits, his finishing position in doubt. (STS/Jeff Brown)

Doiron was sixth after running at the front all night. Gerry managed a seventh-place finish after his lap-54 spin. Shaw, Ryan Kuhn and Alan Tardiff rounded out the top ten.

Sunday’s rough-and-tumble racing, with many drivers managing to drive back through the field after contact, may have been a product of a track surface that has challenged drivers since the start of the season. Typically a multi-groove track that favors racing anywhere through the turns, the inside line at Oxford has been the favorite in 2022, with the outside groove rarely working for long. Plenty of drivers tested the famed “Angels’ Expressway” trying to make up ground, only to drop through the pack after a couple laps.

But Butcher, since his first visit to the track in 2015, has found a rhythm at the legendary track. Butcher won his first PASS North race in the States—and his first PASS win since a 2018 win at Petty International Raceway in New Brunswick—at Oxford earlier this year. An early exit marked Butcher’s only other Oxford visit this year.

Butcher is the fifth Canadian to win the Oxford 250 in its 49-year history. The late Don Biederman defeated Butch Lindley and Bob Pressley to win the 1977 Oxford 250. Canadian racers swept the three-year ACT Pro Stock Tour era of the 250, with Junior Hanley winning in 1993, Derek Lynch in 1994 and Dave Whitlock in 1995.

All four prior Canadian winners, though, hailed from the province of Ontario. Rollie MacDonald earned a win last year as owner of Cassius Clark’s King Competition entry.

But Butcher is the first driver from the Maritimes to win the big prize.

“It means a lot to my family, and as a Canadian in general,” he said. “Scottie Fraser used to come here for a long time and he was unsuccessful. Hopefully he’s looking down on us, and Frank Fraser [Scott’s father] at home, making them proud.”

Even in the face of controversy, Butcher could find plenty of cause to celebrate.

Editor’s Note: The article and results have been revised to correct an inadvertent error in which second- and third-place were swapped.