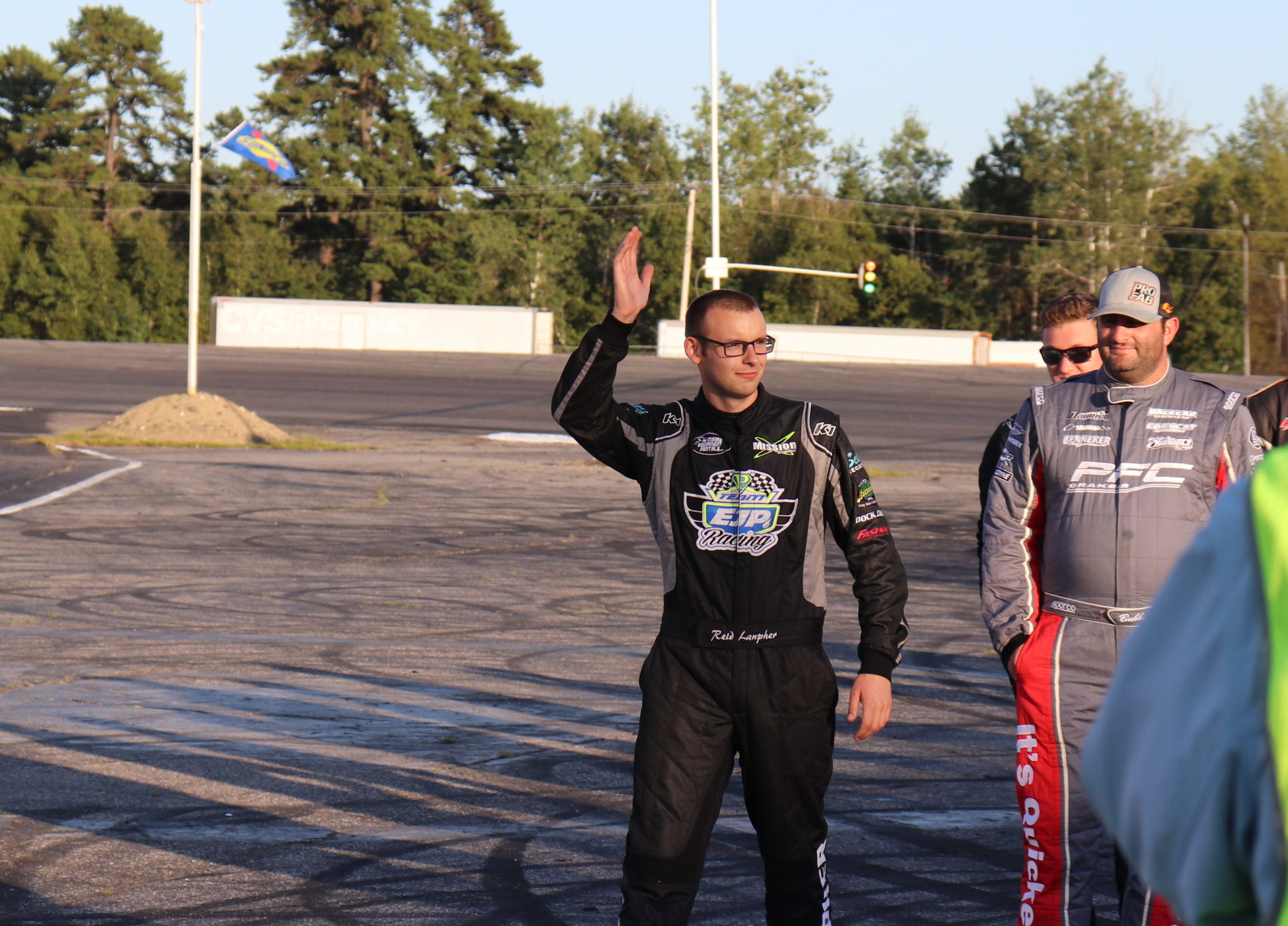 Reid Lanpher waves to the crowd before August's 46th Annual Oxford 250 at Maine's Oxford Plains Speedway. The 21-year-old Super Late Model racer is stepping away from racing to take a greater role with the family business. (Jeff Brown photo)

While Reid Lanpher celebrated in victory lane at Oxford Plains Speedway last month, fans experienced the relief of a driver who had ended a long dry spell with a statement win. In fact, they were experiencing a driver soaking in what could be his final victory.

The young Super Late Model star confirmed through a series of Tuesday announcements that 2019 was, for the time being, his last season behind the wheel.

Lanpher hinted at the possibility in his post-race report following the Pro All Stars Series North season finale at Seekonk Speedway, where he finished third. A post on his team’s Facebook page stated that Seekonk was “a wrap for us as a team,” while giving the usual thanks to family, friends, and longtime sponsors.

On Tuesday, Lanpher’s Facebook page listed his entire operation for sale. Shortly afterward, crew chief Jason Ricker announced a new job of his own for 2020. Hours later, an interview with Speed51 reporter Brandon Paul confirmed Lanpher’s decision to step out of the driver’s seat.

In the Speed51 article, Lanpher cited the desire to take a larger role with his family’s business. The opportunity to do so, along with Lanpher’s own personal goals and the cost of competition, made the timing right for Lanpher to step away from the sport.

The 21-year-old cut his racing teeth in an assortment of vehicles, from motocross and snowmobile racing to go-karts and Legends cars. After a brief stint as a JR Motorsports development driver in 2012 and 2013 at the age of 14, Lanpher established a presence on the local scene, making his racing home at Maine’s only NASCAR-sanctioned track, Beech Ridge Motor Speedway in Scarborough.

Lanpher emerged as a star of Beech Ridge’s weekly Pro Series while adding select Pro All Stars Series and Granite State Pro Stock Series events to his schedule, primarily at Beech Ridge and Oxford Plains Speedway. At Beech Ridge, Lanpher earned Pro Series championships in 2015 and 2017, winning six features en route to his second crown. Lanpher broke through in PASS in 2017 as well, scoring back-to-back wins at Oxford and Beech Ridge early in the year.

Fans understood Reid Lanpher’s win at Oxford Plains Speedway in October was a hard-fought victory after a challenging season, but few realized it would likely be the young racer’s last trip to Victory Lane. (Jeff Brown photo)

In 2018, Lanpher focused on regional racing, running the majority of the PASS schedule. Lanpher led the points six races into the year on the back of solid performances, finishing outside the top ten only once in thirteen starts. Two wins, at Beech Ridge in July and Oxford in October, and six more podium finishes propelled the young driver to sixth in the year-end standings. Lanpher earned two more notable Super Late Model victories outside of PASS, taking honors in June’s GSPSS-sanctioned Short Track Showdown at New Hampshire Motor Speedway and in July’s $10,000-to-win U.S. Pro Stock/Super Late Model Nationals open at Seekonk (Mass.) Speedway.

But compared to the highs of 2018, Lanpher’s 2019 season was a challenge. The misfortune he avoided a year before found him early on, with mechanical issues and crashes impacting the first few races of the year. Lanpher recorded a weekly Super Late Model win at Oxford early, but by mid-September he had yet to finish higher than fifth on the touring circuit. Lanpher made spot starts in the GSPSS, finishing third at Seekonk and fifth at Thompson (Conn.) Speedway, before returning to PASS for the last two races of the year. At Oxford, Lanpher turned in a command performance, leading every lap en route to his first PASS win in a year. A week later, Lanpher raced to another third-place Seekonk finish, closing his season—and possibly his career—with top-five runs in his last four starts.

Lanpher will now turn his attention to expanding his responsibilities with Scott’s Recreation, the Maine-based powersports business his family owns. In addition to supporting his race team in recent years, Scott’s Recreation was also the title sponsor of the Oxford 250’s 45th running in 2018.

Lanpher’s career, for now, ends with five PASS North victories in 48 career starts, plus a single GSPSS win in eight attempts. In five appearances in the Oxford 250 (all under PASS sanctioning), Lanpher finished second in 2015 and 2017, with a third-place result in 2018. In addition to his touring and weekly success in the Northeast, Lanpher also recorded five starts in NASCAR’s regional K&N Pro Series, with a best finish of 10th in a 2018 West Series race.

And while Lanpher left the door open for racing in the future, carefully avoiding the use of the word “retirement” to describe his decision, the sale of his team presents a significant hurdle in the path of a return. Most of the competitive PASS teams are either family operations or long-term driver-owner pairings, with few options available for one-off starts.

Lanpher’s decision reflects the choices regional racers face when balancing their passion for the sport with the real-world demands of work and family. It highlights the good fortune of the lucky few who are able to sustain careers in the world of short track racing.

And it presents an opportunity for the right racer, with a turnkey racing program available to a driver and team ready to make the leap to Super Late Models.

STS Report Card: Our Picks for the Best of Short Track Racing in 2020