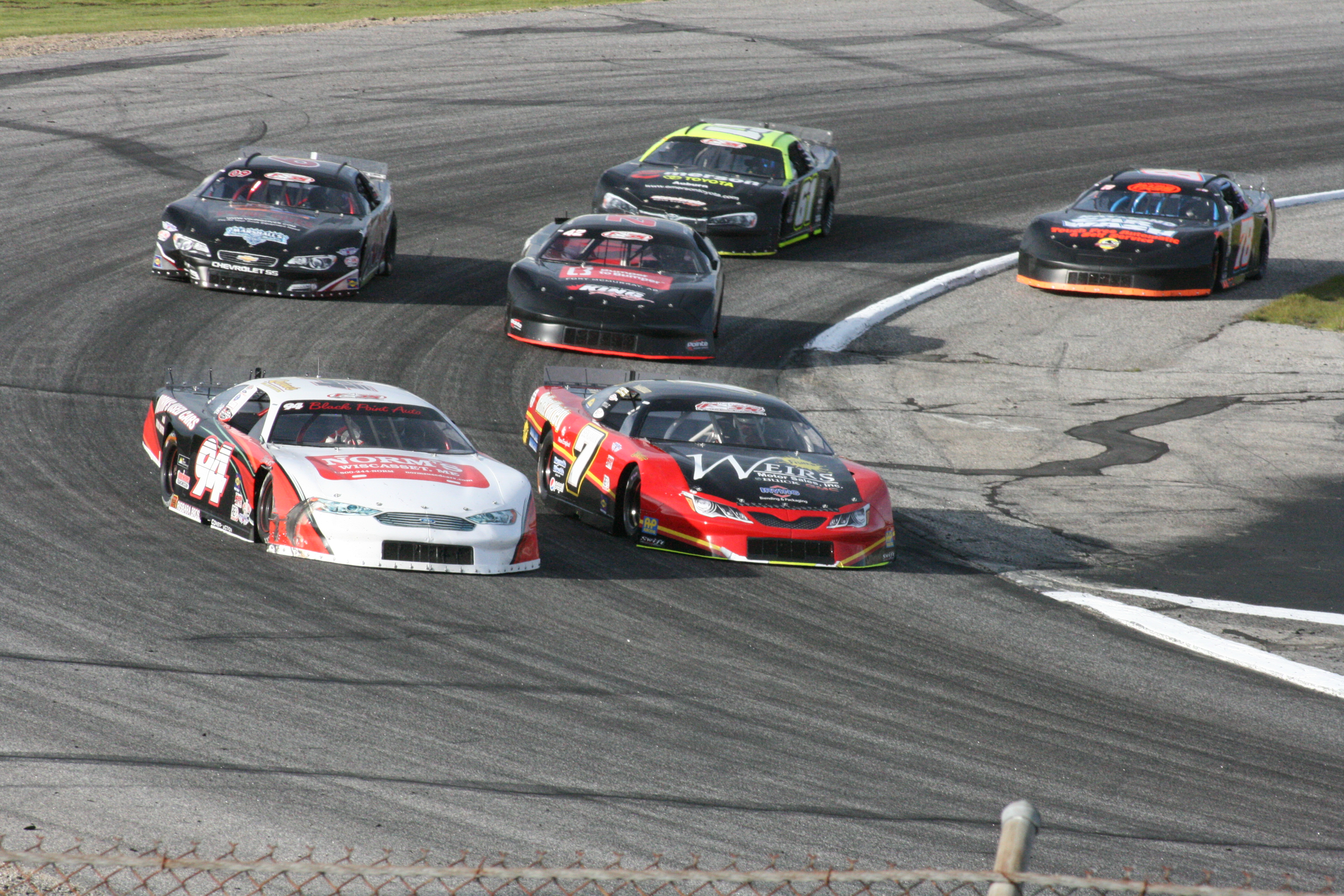 The American-Canadian Tour returned to action after a month-long break with their second trip of the year to Speedway 51. The quarter-mile oval situated on the state line between New Hampshire and Vermont hosted its second Tour event only one race after its first, offering a quick shot at redemption for those who fell short the last time out.

Rain Saturday night meant that the Tour teams would have to wait one extra day for their opportunity, though, with the race becoming a Sunday-afternoon tilt. When the day dawned and the skies cleared, 22 ACT Late Model teams were on hand for the sixth event of 2018. Few surprises were in the lineup; a handful of weekly teams from nearby tracks were on hand, including Quinny Welch and Jesse Switser from White Mountain Motorsports Park, Jason Corliss from Thunder Road and Craig Bushey in track owner Joey Laquerre’s #15VT. Derrick O’Donnell, a three-time Thunder Road track champion, was in a black #5VT. Mike Ziter, after making three starts for Joey Polewarczyk, was in his own #54 Chevrolet. Miles Chipman and the Sullivan Family Racing team, after starting the season strong, were not at the track. Neither were June race winner Patrick Laperle or early challenger Brandon Atkins.

Jimmy Hebert, however, was back at the track. Hebert was indeed looking for redemption; he was in the process of passing Atkins for the race lead in June when the two crashed hard into the frontstretch wall. Hebert’s team had rebounded, rebuilding their car in a week and finishing third in the next race at New London-Waterford (CT) Speedbowl. But what Hebert and his team sought most was the win they had lost a month before.

Hebert took the lead back one lap later, though, and held on for 100 laps and through a few more restarts to win the J.P. Sicard/Kingdom Gravel 151. The win was Hebert’s third career ACT Tour victory, but his first since his two-win 2013 season. Hebert’s last Tour win was at the now-dormant Sanair Super Speedway in Quebec.

Chip Grenier held on to finish a strong second after starting fifth. Behind Grenier were the usual title contenders, with Scott Payea finishing third, Rich Dubeau fourth, and Eddie MacDonald rounding out the top five. Jesse Switser recovered from an early spin to finish sixth, ahead of Mike Ziter, Derrick O’Donnell, Quinny Welch and Dylan Payea.

Hebert’s dominant victory drew the Vermonter within two points of Eddie MacDonald in the standings, but both drivers remain well back of point leader Scott Payea, who has yet to finish worse than fifth in 2018. Rich Dubeau sits over forty points back in fourth, ahead of Corey Mason and Bryan Mason. Chip Grenier, despite failing to make the season opener at Thunder Road, has climbed to seventh in the standings, with nine drivers having started all six features so far.

The ACT Tour teams are on hiatus for another two weekends, with the Tour returning to action in early August at White Mountain Motorsports Park in North Woodstock, NH.

For the first time since 2015, the Granite State Pro Stock Series returned to the high banks of Hudson Speedway in Hudson, New Hampshire. The tight quarter-mile, now under the ownership of longtime competitor Ben Bosowski, welcomed the GSPSS teams for a Sunday evening 100-lap feature as part of the track’s regular weekly program.

Eighteen entries were on hand to test the challenging track, including PASS winner and 2015 GSPSS champion Derek Griffith, who relished the opportunity to win at his home track. Griffith was not the only PASS competitor to throw his hat into the ring, with Wayne Helliwell, Jr. filing a late entry for the event. ACT veteran Luke Hinkley and rookie Jimmy Renfrew, Jr. were among those on hand for the race, as was 2017 GSPSS feature winner Todd Stone from Vermont. Local veteran Bobby Cabral, a feature winner at Star Speedway a week before, made his GSPSS season debut driving a familiar car. The #19, prepared by Star owner Bobby Webber, Jr., was wrapped in a distinctive scheme honoring the late Bob Webber as well as many of the sponsors shared by Star and Hudson Speedways. On the other hand, Scott MacMichael, the 2017 points runner-up and rookie of the year, was missing in action.

The evening green flag meant there was little room for error on the schedule, and a burst of afternoon rains consumed much of that room. Track drying efforts were successful, with the teams getting out for practice and qualifying heats a bit later than planned. Todd Stone and Derek Griffith won the two qualifying heats. Other drivers were less fortunate; Tommy O’Sullivan went out early in heat two after taking heavy nose damage trying to avoid a spinning Jacob Dore, and Bobby Cabral went for a wild roll after making contact with a tire barrier. Cabral, the 2012 GSPSS champion, was uninjured; the car was done for the night.

In a redraw of the top six, Devin O’Connell drew the pole position, leading the field to the green flag alongside Nick Lascuola. O’Connell, in his second year in the series, was making strides on the track while searching for his first win. The Connecticut racer was diagnosed with Asperger syndrome, an autism spectrum disorder, as a child. In racing, O’Connell found an activity that helped him to confront and overcome that hurdle. Success in karting paved the way for a transition to fendered cars, with Hallstrom Motorsports signing the teen to race in the American-Canadian Tour in 2016. After winning Rookie of the Year honors, O’Connell and his family started their own team, diving into the GSPSS ranks to build experience in a Pro Stock.

To take the next step and bring home a trophy, O’Connell would have to survive one hundred laps at a track he had never seen before. And survival was, indeed, the name of the game. Bobby Cabral was not the only driver to meet with the tire walls outside the track, as Luke Hinkley’s night ended nosed into the tires and Jimmy Renfrew, Jr.’s car had to be removed from atop the barrier. Ray Christian III caught air during an early-race altercation, and Barry Gray took a ride into the woods late in the going.

Wayne Helliwell, Jr.’s first race at Hudson in twenty years did not go as well as planned, with the multi-time ACT champion finishing 14th in the field. It could have been worse: Barry Gray was scored last in the results as a result of some off-track antics after his late-race crash.

The return of the GSPSS to Hudson Speedway, a track often ignored by touring schedules, was quite welcome. However, the visit also highlighted many opportunities for improvement. Not only were teams forced to score the race by hand in the absence of an electronic scoring system, but the dramatic wrecks demonstrated the risks of tire barriers, trees and unguarded lamp posts. In fairness, Hudson is an old track, and making big changes is a huge risk without big-ticket events on the schedule. With luck, Ben Bosowski will be able to make the necessary upgrades to welcome more touring events in the coming years.

After the fifth race of the season, Cory Casagrande continues to lead the points over Jacob Dore, with Nick Lascuola sneaking into third in points ahead of Joey Doiron. With three top fives and four top tens in five races so far, Lascuola’s fortunes are looking up in his second year on the circuit. In a marked reversal of last season, three of the top five in points have won features so far, with Casagrande and Lascuola still searching for victory lane.

Casagrande, Lascuola and the other GSPSS regulars will have their next chance on July 28th when the series heads north to White Mountain Motorsports Park for its own 100-lap feature.

NORTH OF THE BORDER: WALLACE WINS IWK 250 AFTER TECH ISSUES FOR TOP TWO

The Parts for Trucks Pro Stock Tour convened upon Antigonish, Nova Scotia for the IWK 250 presented by Steve Lewis Auto Body at Riverside International Speedway. Since 2007, the annual event has been promoted in support of the IWK Health Centre, a family hospital in the Nova Scotia capital of Halifax. Former NASCAR driver Kenny Wallace was tabbed as the event’s celebrity driver. Wallace, spending his “retirement” racing on dirt, was entered in the “Cat Car for Kids” fielded by fellow racer Donald Chisholm.

However, a Tuesday post-race announcement confirmed that, due to unapproved carburetors, Clark and O’Blenis had been disqualified, along with fifth-place finisher J.R. Fitzpatrick. The disqualifications handed the win to Kenny Wallace, with Butcher ascending to second and Craig Slaunwhite to third. Wallace is the first celebrity winner of the 250 since Regan Smith took the checkered flag in 2008. If Clark had not been disqualified, he would have become the first driver to win all three of the Canadian Maritimes’ 250-lap Pro Stock/SLM events.

Thunder Road International Speedbowl kicked off the week’s racing with the usual Thursday program and a little on-track fireworks left over from the holiday week. Jim “Boomer” Morris used a late-race crash in the 50-lap Late Model feature to close the gap on Kyle Pembroke, beating Pembroke in the final nine-lap shootout for his first feature win of the year. Eric Chase finished a season-best third.

At Beech Ridge Motor Speedway, Trevor Sanborn used the momentum from his recent PASS top-three run to win his first feature race of 2018, beating Dalton Gagnon and veteran David Oliver. Curtis Gerry struggled to finish tenth, allowing Sanborn to take over the track points lead by one heading into an off-week. Wayne Helliwell finished sixth, one spot ahead of Mike Rowe, while Dave Farrington, Jr. stumbled to a 15th-place run.

Nick Reno was among the weekend’s first-time victors with a Pro Stock win at Wiscasset (ME) Speedway on Saturday night. Reno made a few PASS starts late last year and appears to be coming into his own with his Dale Shaw-built #77.

Thompson (CT) Speedway resumed its 2018 season with a Saturday-night program featuring NASCAR’s K&N Pro Series East and the Throwback 100, hinting back to the days of the successful Busch North Series. Ryan Morgan topped a 20-car field to win the night’s Late Model feature, with William Wall and Mark Jenison rounding out the podium. Tom Carey III, whose father had success on the Busch North Series in the late 1990s, finished fourth. The Throwback 100 was a far cry from the Busch North era it threw back to, with California’s Tyler Ankrum finishing first in a field of thirteen entries. Spencer Davis finished fourth in Danny Watts’ entry, painted black and renumbered “13” in memory of Connecticut racing legend Ted Christopher.

Not all the area’s tracks were so fortunate; White Mountain Motorsports Park cancelled its Saturday racing card for inclement weather, opening the door for some drivers to attempt the following day’s rescheduled ACT Tour feature at Speedway 51.

The New England touring schedule, and many weekly programs normally scheduled for Saturday, are dormant this weekend with the arrival of the NASCAR circus at New Hampshire Motor Speedway. However, several drivers in Saturday and Sunday’s events have close ties to the short track world, and will surely relish their opportunity to represent the region on its biggest stage.