The nineteen-year-old closed out his first-ever touring championship with his third series win of the year.

Gabe Brown streaks past the flagstand at Claremont Motorsports Park to win his third GSPSS feature of 2021 in the King's Electric 100. (Jeff Brown photo)

Gabe Brown had already clinched the Granite State Pro Stock Series championship with one race to go. But the soon-to-be-crowned champ was not about to let an opportunity for a win go to waste.

Brown prevailed over the long haul to win Sunday’s King’s Electric 100 at Claremont Motorsports Park, closing out his championship season with his third GSPSS win of the year. 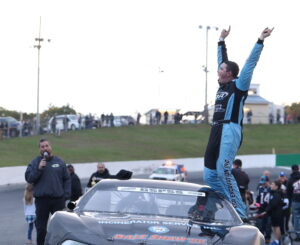 Brown is jubilant in victory lane after winning his third race of the year, claiming the 2021 GSPSS title in strong fashion. (Jeff Brown photo)

The Center Conway, N.H. driver was fastest in time trials, but started fourth after the pre-race redraw. Casey Call led the field to green and quickly found himself under attack from Brown, local favorite Luke Hinkley, and outside polesitter Cody LeBlanc. The four leaders swapped positions in the opening laps, with LeBlanc and Brown each finding their way to the point.

But it was Brown who had the most sticking power, driving away after a lap-34 caution flag. Two lapped cars posed a threat to Brown’s advantage, but neither interfered with the race for the lead.

With no more caution flags to slow the pace, Brown set sail for the checkered flag, taking his second straight GSPSS win and sweeping the year’s two visits to the series’ home track.

Hinkley, whose shop is only a few miles from the speedway, came home second for his best finish of 2021 and his third top-five finish of the year. “I was hoping Cody would take care of [Brown] for me, but he was just better than us tonight,” Hinkley said. “But hey, it’s in one piece. I’m ready to go snowmobiling.”

LeBlanc held on for third, a career best in GSPSS competition. “That was awesome,” LeBlanc said. “It feels good to be here. It was good to be competitive and lead laps.”

The 2018 North East Mini Stock Tour champion joined the GSPSS ranks full-time in 2020, but struggled with his car all season. LeBlanc sold his Pro Stock and returned to NEMST this year, clinching his second series title last week at Thompson Speedway while helping Brown on off-weeks. Brown repaid LeBlanc’s loyalty with a GSPSS ride at Lee USA Speedway, where LeBlanc finished a strong eighth.

At Claremont, LeBlanc looked likely to drive the same car to victory lane, if he could get by his teammate for the day. “I tried to be easy with him, LeBlanc said. “He gave me a pretty good opportunity, him and his family. I’m very grateful for them.”

Call was fourth at the stripe, ending his challenging sophomore season on a high note. Oxford Plains Speedway regular Brian Whalley was fifth, the final car on the lead lap.

The eleven-car field was symbolic of what has been a trying tenth season for the New Hampshire-based touring series. Despite the pandemic, 2020 was a year of momentum for the GSPSS, with competitive races and a popular, recognizable champion in Joey Polewarczyk. A deep field at this year’s season opener, won by Polewarczyk, hinted at more of the same in 2021.

But the second race of the season drew a field just shy of ten cars, with Polewarczyk among those missing. Reduced schedules for some of last year’s chief contenders were one factor. Weather was another. Rain forced the outright cancellation of two races and prompted the rescheduling of competing tours’ events, resulting in heads-up conflicts at some of GSPSS’ biggest races. Three more races were canceled due to short entry lists, while only 14 cars took the green flag in July’s Granite State Nationals and August’s visit to Beech Ridge Motor Speedway. Only Brown and series stalwart Josh King started every race.

The struggles of New England short track racing as a whole were reflected in the GSPSS.

With the departure of former stars, though, came Brown’s rise as a contender. The 2018 Oxford Plains Speedway track champion joined the GSPSS after two full seasons competing with the Pro All Stars Series, hoping to develop the consistency that eluded him among PASS’ established driver base. Only eighteen years old, but entering his fifth season in a Super Late Model, Brown carried the weight of his record and his reputation. His record, despite the track championship in 2018, lacked a feature win in a stock car. His reputation, despite his likable nature, was one of aggressive driving enhanced by impatience.

Under the GSPSS flag, Brown matured, hitting his stride with a third-place finish at Hudson Speedway in early July. A weekly feature win in a Late Model buoyed Brown’s confidence entering the $10,000-to-win Granite State Nationals, where Brown broke into Super Late Model victory circle while holding off drivers like Polewarczyk, Eddie MacDonald and Derek Griffith.

For the rest of the season, Brown finished no worse than seventh in GSPSS competition, adding two more wins and another pair of Late Model trophies to further build his résumé.

After making two starts for new car owner Dale Drew, winning one and coming a few laps short of winning the other, Brown returned to his own #61 at Claremont, giving one final ride to a livery paying tribute to father Gene’s own racing career.

Brown was appreciative not only of his family’s support, but of the support of car builders and mentors Dale and DJ Shaw. “I’m really thankful for everything Dale, Steph and DJ have done for me,” he said.

Now nineteen years old, Brown can shake off the “weapon” label and confidently replace it with another: “winner.”