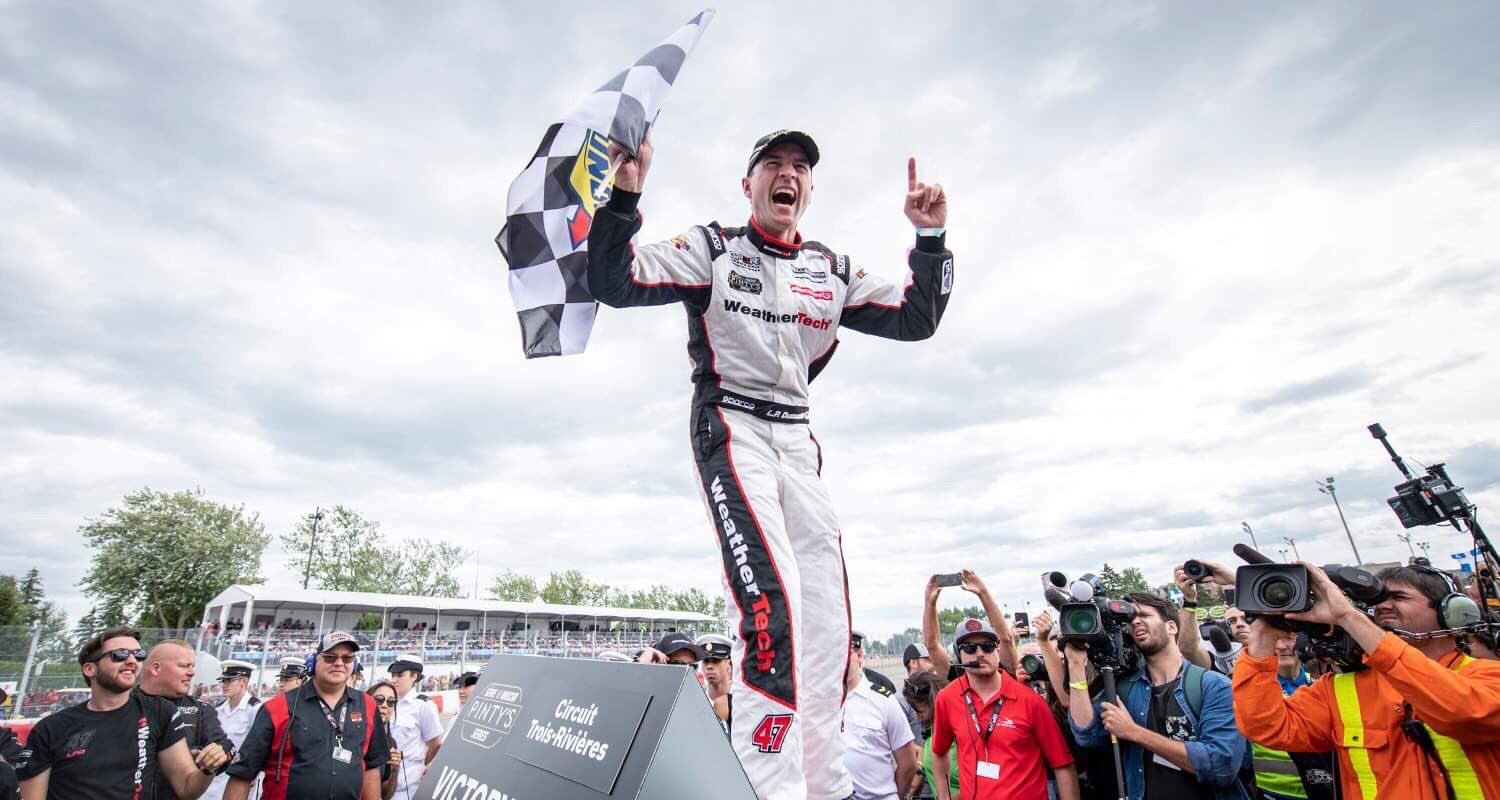 There’s no telling when the party will end in Trois Rivieres tonight.

In the 50th running of the Grand Prix de Trois-Rivières, and the 50th year of Dumoulin family racing, hometown hero LP Dumoulin grabbed perhaps the biggest win of his career.  To make it even sweeter, he was surrounded by his family from start to finish.

Prior to the race, family patriarch Richard Dumoulin paced the field in the car he raced during the first GP3R. JF Dumoulin finished third, joining LP on the podium for the first time in their NASCAR Pinty’s Series career.

“There’s no way to describe the feeling,” LP Dumoulin said. “I’m on the podium with my brother JF in front of all our family and friends.”

Dumoulin’s No.47 Weathertech Canada/Bellemare Dodge was locked in a fierce late race battle with Alex Tagliani with the laps winding down.

The two-time champion needed help, and it came when T.J. Rinomato spun in front of the leaders with five laps to go, causing Tagliani to run wide and allowing Dumoulin to steal the lead.

“It’s perfect. My team has worked so hard to give me a great car all season long and we proved once again that we are capable of winning on both ovals and road courses,” LP Dumoulin said. “In the end, we caught a little bit of traffic and that helped me pass Tagliani, we set some quick laps and we won.”

It was the second win for Dumoulin at his home track, and ninth of his career.

Tagliani who was in prime position to score his third straight at GP3R win, finished second. The Lachanaie, Quebec driver took the lead on Lap 20 after Andrew Ranger came down to pit. Tagliani would go on to lead 25 laps en-route to his second podium of the season.

“It was a great finish for our sponsors,” Tagliani said. “Unfortunately, we were just in the wrong place at the wrong time. There was a spin and we took evasive action through the marbles and second place was able to take advantage of it.”

The elder Dumoulin, JF, mounted a hard charge late in the race to catch the leaders. JF’s No.04 Spectra Premium Dodge, shifted to a part-time schedule in 2019, but had this race circled on his calendar. In the end, the Trois-Rivères, Quebec driver would ultimately tie his best career finish in third and scoring his third career podium in the process.

“It’s awesome. It’s our first podium at Trois-Rivières in the Pinty’s Series,” he said. “I’ve been fourth a lot of times, so I’m really excited to be up on the podium with my brother. It’s a great day for us and our sponsors.”

Kevin Lacroix came into Les 50 Tours Hotel Le Concorde trailing Ranger by 18 points. Lacroix started from the outside of the front row and would lead the first 15 laps, before being hit with a penalty after taking his fuel can out of the pit box. Lacroix’s N0. 74 would eventually fight his way all the way up to fourth. D.J. Kennington completed the top five finishers.

Jason Hathaway and Raphael Lessard were sixth and seventh respectively.

After leading four laps, Ranger would end up finishing eighth. Ranger will now carry a 14-point lead over Lacroix heading into Riverside next week.

Simon Dion-Viens and Donald Theetge rounded out the rest of the top-10 finishers.

The NASCAR Pinty’s Series will now continue on their run of three races in three weeks this August. The Series will be back in action next Saturday, August 17 for the Bumper to Bumper 300 at Riverside Speedway before finishing the month off at Canadian Tire Motorsport Park.