Hebert is the tenth driver to win multiple Spring Greens, and the first to win two Spring Greens at White Mountain Motorsports Park. 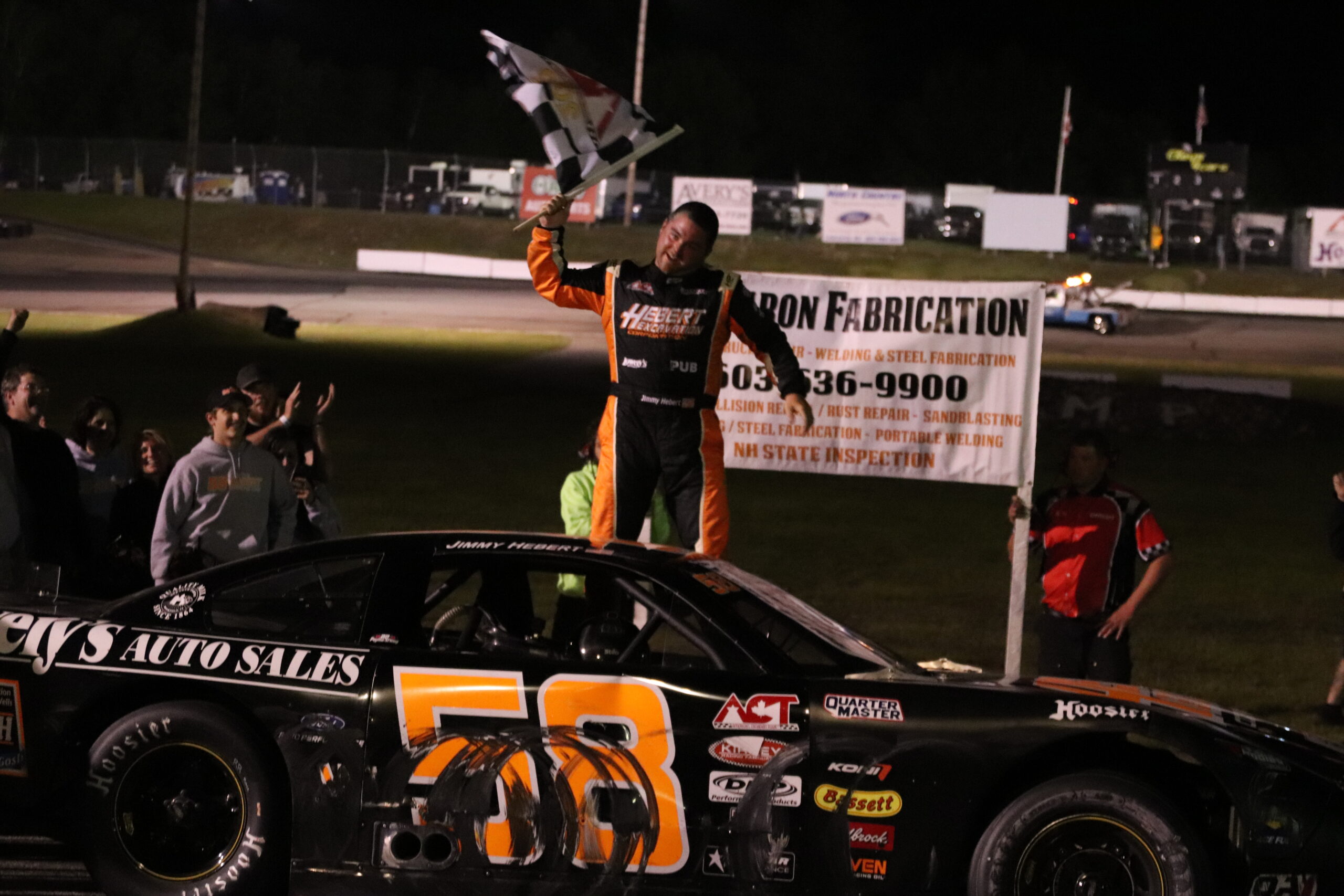 Jimmy Hebert climbs from his car after prevailing in a physical battle to the checkered flag in Saturday's 47th ACT Spring Green. (STS/Jeff Brown)

How hard was Jimmy Hebert willing to fight for the win in Saturday night’s American-Canadian Tour Spring Green?

The tire rubber etched into his right door told the whole story.

The 2020 ACT Tour Late Model champion prevailed in a furious battle with Jimmy Renfrew, Jr. and Derek Gluchacki, conquering the high banks of White Mountain Motorsports Park in the 47th running of the iconic event.

Hebert is the first driver to repeat as a Spring Green winner at White Mountain Motorsports Park. (STS/Jeff Brown)

“That was a fierce battle,” Hebert said after climbing from his car. He paused.

The Spring Green’s history predates that of the American-Canadian Tour itself, with the long-defunct Catamount Stadium staging the inaugural Spring Green in 1974. Following Catamount’s closing in 1987, Quebec’s Sanair Super Speedway, Airborne Speedway in New York and Devil’s Bowl Speedway in western Vermont took turns as host tracks through the 2017 season. WMMP’s spring Tour date was christened the Spring Green in 2019, making Saturday’s event the fourth contested at the North Woodstock, N.H. quarter-mile.

Hebert, who won the 2020 running en route to his Tour title, rolled off fourth in search of his second Spring Green trophy. The Williamstown, Vt. veteran quickly settled into second behind WMMP weekly warrior Kasey Beattie, who led from the pole until a lap-18 spin by Robby Gordon Douglas.

Beattie dropped to second on the restart, with Hebert taking the lead for the first time. Rich Dubeau went for a spin a few laps later, bunching up the leaders and putting Beattie in the clutches of Jamie Swallow, Jr. and Renfrew, who had battled from ninth on the grid. Renfrew charged from fourth to second, with Gluchacki following through for third and dropping Beattie back to fourth.

WMMP is the fourth track to host the Spring Green, an event that predates the American-Canadian Tour itself. (STS/Jeff Brown)

Problems for Patrick Laperle brought out another quick yellow, erasing the gap between Hebert and Renfrew. Renfrew pulled ahead when the race resumed, with Hebert losing ground in second place. But lap by lap, Hebert reeled in his young challenger, closing in on Renfrew’s rear bumper.

Passing Renfrew, though, was another story. Renfrew was on the defensive, shutting off the inside line every time Hebert looked low. Hebert was persistent, and as Renfrew’s defense grew more aggressive, Hebert turned up his own fire, the two leaning into each other in the turns, Renfrew poking his nose into Hebert’s rear fender as Hebert took the advantage.

Gluchacki was content to ride in second, waiting for either of the frontrunners to make an error, but as Renfrew slipped back from the lead, the ACT Tour points leader made his own play for the runner-up slot.

A lap-84 spin for Jamie Swallow, Jr. bunched up the top three, with Hebert muscling his way into the lead and leaving Renfrew to fend off Gluchacki. On lap 97, Swallow spun again, giving Renfrew another shot at Hebert. Renfrew inched ahead on the inside, but a chain reaction behind the leaders slowed the field instantly.

The leaders swapped spots for the restart, with Hebert holding the inside line and Renfrew hanging tough on the outside. Gluchacki jumped into the fray immediately, poking his nose underneath Hebert and threatening to take the lead battle three-wide. Renfrew slipped back on the outside as Gluchacki remained pinned to the inside of Hebert, but the new battle was paused when Jared Curtis and Robby Gordon Douglas brought out another caution on lap 99.

Hebert took the outside lane for the restart. And while Gluchacki was able to hang at Hebert’s driver’s-side door for a couple laps, Hebert ultimately pulled away with the lead.

Already a three-time winner at WMMP, Hebert led the final 23-lap run to the checkers to take his second Spring Green and his fourth ACT Tour win at the track, tying him with multi-time champion Jean-Paul Cyr. Hebert is the tenth driver all-time to win multiple Spring Greens, and the first to win two Spring Greens at WMMP.

DJ Shaw (#04VT) slides up the banking after contact with Jimmy Renfrew, Jr. Shaw would settle for seventh after racing with the top four all night. (STS/Jeff Brown)

Gluchacki, who won last week’s Spring Board 100 at WMMP as a warm-up for the Spring Green, came up just shy of back-to-back success at the track. Gluchacki’s second-place finish maintains a hot streak for the third-year ACT Tour racer.

Renfrew faltered on the final restart, making contact with car builder DJ Shaw in a battle for position, but rallied back to finish third.

Patrick Laperle overcame an early tow to finish twelfth, best among the Canadian competitors. Twenty-seven teams were able to take the green flag, while mechanical woes sidelined Jonathan Bouvrette and Rémi Perreault earlier in the evening.

Gluchacki’s second-place finish will keep him atop the ACT Tour points standings only three races into the season. The 20-year-old from Dartmouth, Mass. joined the Tour full-time in 2020 when his local tracks were unable to open due to the COVID-19 pandemic. A win last fall at Thompson went a long way toward helping Gluchacki mature into a regular contender.

Mathematically, Hebert is in the thick of the points race, though the veteran racer is not committed to a full ACT Tour schedule. Hebert, who only turned 31 in May, has been a Tour mainstay since 2012, breaking into the winner’s circle a year later. Over the last four years, Hebert has been one of the Tour’s undisputed frontrunners, winning multiple races and capturing the 2020 ACT Tour crown. Hebert’s title defense, though, was plagued with misfortune; three wins were offset by mechanical woes, plus a practice crash that sidelined the team for one race. During the season, Hebert made the decision to pick and choose his schedule in 2022 to spend more time with family.

A season-opening crash at New Hampshire Motor Speedway seemed to justify Hebert’s decision, but the team thrashed to reassemble the car for the next race at Thunder Road. Hebert’s seventh-place finish there left the team third in points after only two races. Saturday night’s win has Hebert in contention for another title, should he have a change of heart.

After all, it’s clear his competitive spirit hasn’t changed.