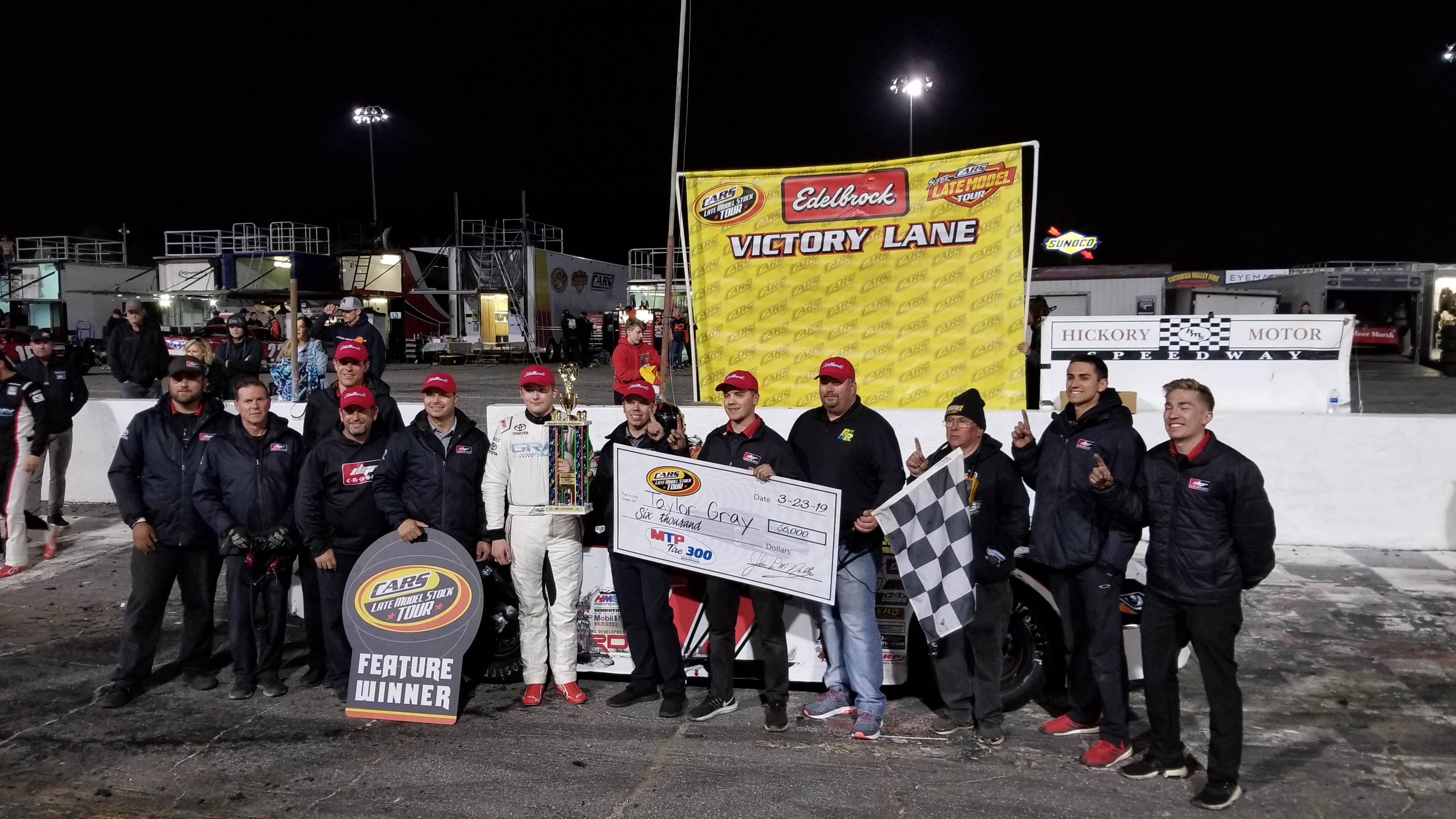 And with that, Taylor Gray’s pursuit of a CARS Tour Late Model Stock championship began in earnest.

The 14-year-old son of NHRA Pro Stock racer Shane Gray, the brother of reigning Pro Stock champion and current NASCAR prospect Tanner Gray and grandson of NHRA Funny Car race winner Johnny Gray, lived up to the moniker of Hickory Motor Speedway by winning at the Birthplace of the NASCAR Stars.

And he did so by holding off one of the true stars of Late Model Stock racing in Tommy Lemons Jr.

Gray had lost a restart to Lemons on the previous run, but took the lead right back on the final reset with 15 laps to go and never looked back to win for the first time on Tour competition.

“It was a hard battle,” Gray said. “I just had a great run on the outside, and I didn’t think I would get him on the outside. I had an awesome race car all weekend long, and I have to thank everyone at DGR-Crosley. It’s so awesome to win in just my second CARS Tour race.”

Hickory is the track where Gray has the most experience, having contested the entire Limited Late Model schedule in the foothills of the high country last season.

He used that experience to aplomb on Saturday night, qualifying his DGR No. 17 in fourth, and remaining inside the top-five for the entire race.

It was a race marred by attrition as numerous contenders were eliminated by a series of cautions and red flags.

Even more remarkable about Gray’s triumph is that he even withheld a charge from 2014 Hickory track champion and the winningest driver in the CARS Tour’s history in Josh Berry. The two exchanged the lead after the Lap 100 mark, but Gray quickly returned to the point.

Berry’s car faded late, allowing Lemons to mount his charge, and briefly take the lead on a Lap 129 restart.

Lemons took the inside lane on the final restart and Gray utilized the momentum from the high side the clear his pursuer and roll into victory lane.

Gray’s celebration included victory poses with the entire DGR-Crosley team that made the trek west from Martinsville Speedway, and with his family, as Tanner was set to compete in the Super Late Model portion of the doubleheader as well.

And even more special considering who he won against.

“These are really stout Late Model racers out here,” Gray said. “It was really good to beat Berry, Lemons and all those guys.”