The Pro Stock/Super Late Model open feature is the first major SLM event in New England to point to the race tire shortage as the cause for cancellation.

The starting field lines up for last year's Freedom 300 at Lee USA Speedway. The multi-division event will not be run in 2021, with the track citing tire availability. (Jeff Brown photo)

One of New England’s newest major events for Super Late Model racers will not be contested this year after all.

Lee USA Speedway announced this week via social media that the New Hampshire track will not host this year’s second edition of the Freedom 300 next weekend.

“Lee USA Speedway officials announced today that due to the ongoing race tire shortage, a decision has been made to postpone the annual running of the Freedom 300,” read a news release posted on Facebook September 1. “They would have loved to have better news for the racers and fans, but the huge special event will have to wait until next year.”

The Freedom 300 is the first major Pro Stock or Super Late Model event in New England to be called off entirely due to the race tire shortage. While signs of short supply have been evident, primarily in Modified racing, the six-state region’s fendered touring cars had avoided any major cancellations or postponements relative to the shortage.

Last weekend’s Oxford 250 may have put a strain on supply, with Hoosier Tire East supplying tires for well over sixty entries for the event. However, Lee had yet to publish an event schedule or rules brief for the Pro Stock open, casting some doubt as to how firm the plans were for the Freedom 300.

Granite State native Derek Griffith won last year’s inaugural Freedom 300, his second $10,000 jackpot in a week. But Griffith’s success was overshadowed by the event’s shortcomings. An ambitious schedule featuring all of Lee’s weekly classes ran late from the start, pitting both major features against a midnight curfew. The Street Stock feature was called after only 15 green-flag laps, leaving barely 45 minutes for the Pro Stock main event. Griffith was flagged the winner after 100 laps, narrowly beating the curfew and leaving fans and teams frustrated.

In separate interviews earlier this season with the Maine-based Black Flagged Podcast and western New Hampshire’s Turn 4 Podcast, Lee general manager Joe Bassett acknowledged that the track had planned too ambitious an evening, and hinted that this year’s lineup would be more streamlined to avoid a similar outcome.

Wednesday’s brief announcement, part of a larger release detailing Lee’s weekly championship finale, promised a return of the marquee event in 2022: “Plans are already being made for the 2022 edition of the race, which will feature … the NHSTRA Street Stocks and $10,000 to win for the Pro Stocks, with many more announcements regarding the Sunday, September 11, 2022 event expected during the off-season.”

The race’s cancellation may reflect a greater stress within the Pro Stock and Super Late Model ecosystem in southern New England. A day earlier, the Granite State Pro Stock Series called off this weekend’s race at Monadnock Speedway, openly citing too few entries for the second time this year. The series’ last two events, including the $10,000-to-win Granite State Nationals at Claremont (N.H.) Motorsports Park, have drawn eight to ten fewer cars than last year’s events. Scheduling conflicts with other touring series justify some of the gap.

A theorized “Oxford 250 hangover” has not seemed to affect regional car counts in past seasons, with just enough of a divide between the PASS/Oxford cohort and the GSPSS/southern New England cohort. 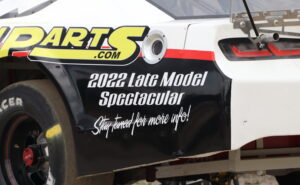 This teaser appeared on Donnie Colpritt’s GSPSS entry at Beech Ridge, though no details have yet been announced. (Jeff Brown photo)

But in a year that has tested drivers and teams away from the track, coupled with the wake of the most taxing event for Super Late Model racers in the region, such a theory could be bearing fruit.

For their part, tracks and sanctioning bodies remain bullish on the platform, both short- and long-term. GSPSS is heavily promoting its next date, a mid-September visit to Star Speedway in support of the track’s annual Star Classic program. Star itself is throwing its hat into the ring with a $20,000-to-win Pro Stock/Super Late Model open scheduled for next August, announcing the race only a couple weeks ago. And a Pro Stock fielded in connection with former NASCAR Cup Series team owner Archie St. Hilaire at Beech Ridge Motor Speedway teased hints of a “2022 Super Late Model Spectacular,” though only rumors offer any context.

With only two months remaining in New England’s brief racing season, who races and where they race will be an intriguing topic to follow.