The 2019 season delivered from start-to-finish … 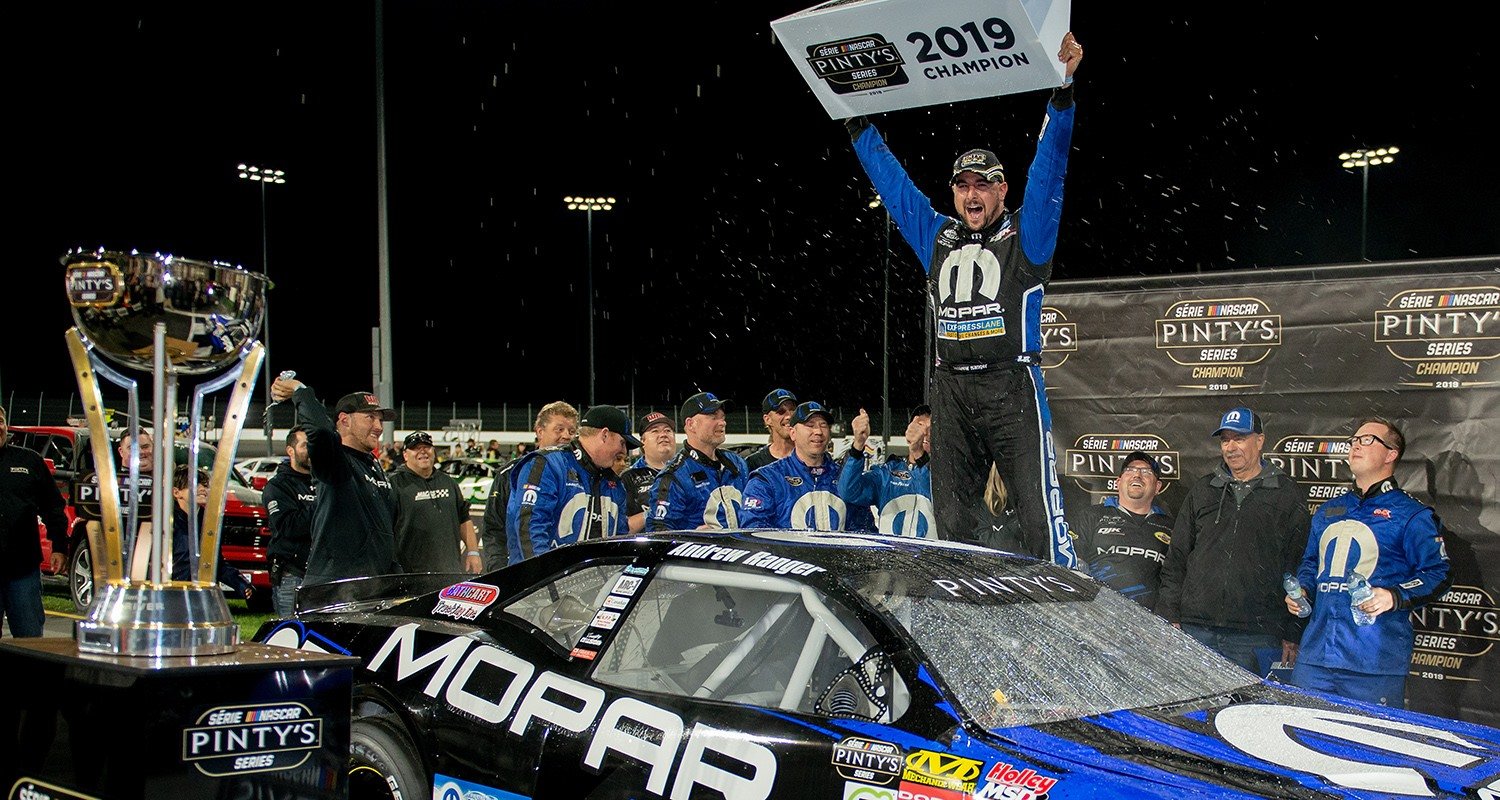 It’s been near impossible to separate Andrew Ranger and Kevin Lacroix throughout the 2019 season.

The two drivers have traded the points lead since the season opened at CTMP in May, and entered the season finale at Jukasa Motor Speedway as the only two drivers in contention for the championship.

It was only fitting the trend continued as Ranger edged Lacroix by one position to earn his third NASCAR Pinty’s Series championship.

It was a celebration ten years in the making.

Ranger, who won the inaugural Pinty’s Series championship in 2007 at the ripe age of 20, followed that two years later with a second championship. He’s remained a dominant driver – he is the series all-time leader in wins with 28 – but has repeatedly suffered heartbreak chasing his third title.

Following four wins and a nearly perfect 2019 season, a fourth-place finish was all Ranger needed to finally return to the pinnacle of the sport.

“It’s a dream and I’m so happy for my crew,” Ranger said. “Everybody here works so hard and it’s fantastic to win our third championship. I knew that we were really fast, we knew we had to finish in front of him, and we did just that and won the championship.”

Despite leading the most laps, Kevin Lacroix would once again fall short of his maiden championship. He finished the season with two wins, but the bad luck struck again.

Lacroix started the race on the provisional pole after qualifying was rained out, and dominated the first half of the race, locking up bonus points for the most laps led. But following the halfway break, he began to fade.

“We had a fast car today,” Lacroix said. “We went for the win, so we tried an adjustment but it didn’t work out. We are just very thankful for the great season that we had.”

As Lacroix fell back, it was the pair of EHR Team Orange drivers who saw their cars jump to life. Brett Taylor and Jason Hathaway battled for the last quarter of the race, treating fans to one of the most high-intensity battles of the season. As the laps wore down, Taylor tried everything he could to get around his teammate: he did just that in the most dramatic way possible.

On the final lap, in the final corner, Taylor made his move. Putting the bumper to Hathaway, the Calgary, Alberta driver lead only one lap all evening: the most important one. Scoring his first career Pinty’s Series win, Taylor would make history in the process.

“[Jason] gave me enough room on the bottom to race him clean,” Taylor said. “I was super loose and every time I got to his door I had to back off cause I didn’t want to blow a tire.

“In the end, all I had to do was give him a little bit of a bump,” Taylor added.

With the victory, Taylor becomes the first Western Canadian driver to win in the Pinty’s Series –158 of the first 159 races were won by drivers from Ontario and Quebec, with Donald Chisholm (Nova Scotia) the previous outlier.

Hathaway would come home second, just over a tenth of a second behind Taylor. Donald Theetge finished third in his final start as a full-time driver.

Ranger and Lacroix completed the top five. Pete Shepherd III finished sixth after having to start at the rear, with Alex Guenette, who was subbing for Alex Tagliani coming home in seventh.