That’s exactly what the Riverhead, New York native did, winning the race and leading the most laps. Goodale got by Doug Coby on lap 78 and led the rest of the way to score his fifth career win.

What was a 22-point deficit for Goodale heading into Sunday is now just 12 points with one race to go in the Tour season.

Goodale won in dominating fashion, lapping the field all the way up to sixth place, including two of his title rivals in Ron Silk and Justin Bonsignore.

“I feel like we didn’t fall off as bad as everybody else,” Goodale said. “Everybody was skating around out there on entry, and they were losing the ability to throttle up off. I was just real consistent. I wasn’t overdriving the car. Wasn’t letting it step out on me. It was solid for me…. The car just kind of came to me.”

It wasn’t smooth sailing for Goodale early on, who nearly hit a spinning Tommy Catalano on lap 13 and thought about bringing his No. 58 to pit road for changes.

Instead, Goodale stayed out, and sliced through the field once the race resumed.

Now, Goodale gets to finish the season at Martinsville in two weeks, where he took home the grandfather clock after winning the Tour’s first race at the paperclip in 11 years.

Jon McKennedy’s 2022 can be summed up in one word: consistency. The Chelmsford, MA native scored his ninth-straight top-10 finish Sunday and leads the Tour in average finish (6.86). The championship leader remains in control of his own destiny as the Tour heads to Martinsville for the season finale, ahead of Silk by six points and Bonsignore by 11 points.

“We’re going to try and go [to Martinsville] and win, but as a driver, I’ve got to be smart and not put myself in bad situations and just give me every position I can get without being in a bad position.”

McKennedy finished 19th in practice before qualifying 17th out of 24 cars Saturday afternoon. 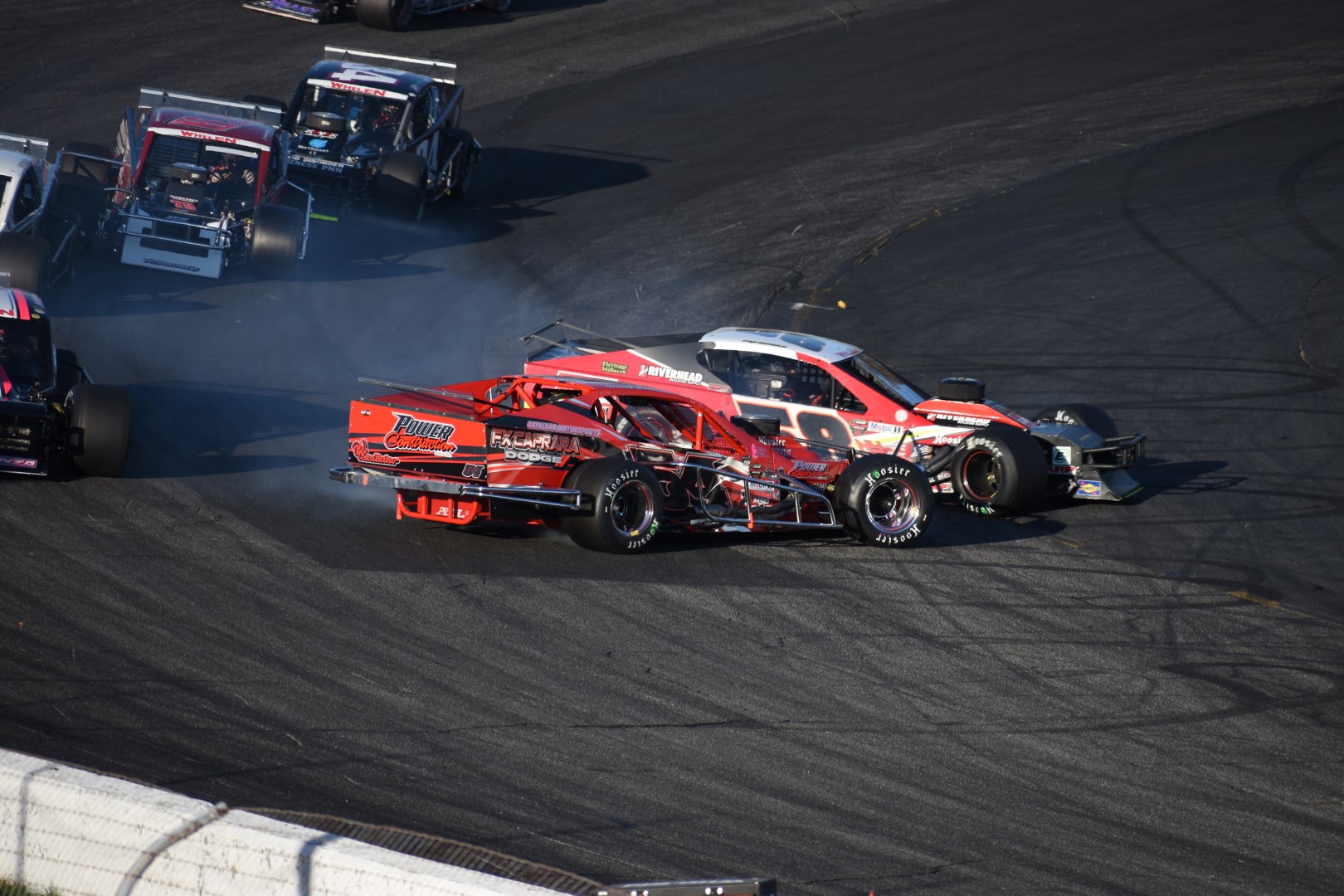 “We really struggled,” McKennedy said of Saturday. “We were really slow. Made some changes, and I knew today the track would be looser, so I wasn’t honestly too worried. We slowly clawed our way to the front… Overall, good day.”

The Catalano spin on lap 13 ended up being the only caution flag of the race.

The final 137 laps were all run under green, without any scheduled pit stops.

The stretch to the checkers was received better by some drivers than others.

“We finally get back to Thompson… I think we need to put on a better show for people than what we did,” Silk said. “I think that could’ve been accomplished one way or the other.”

“No one sets their car up to go 150 laps green. You’re going to pit and maybe make some adjustments if you need to.”

While it didn’t make for a compelling battle among lead-lap cars when things were said and done, the long green-flag run gave Goodale a chance to flex the muscle of his No. 58, stretching his lead out to over six seconds at one point.

“If I was mired back in the pack and I was going laps down, I’d be upset too,” Goodale said. “I thought there was some opportunities where cars were up out of the groove into the wall or down low… I’ve been on the other side of that too. You get some and you lose some. I probably was just about the only car out there praying for a caution not to come out.”

Paul Lambert is an aspiring collegiate journalist. A writer and broadcaster, Paul's excited to cover New England short track racing in 2022. Paul has also been published in the Boston Herald, Speedway Illustrated and on Autoweek.com.