One new track and a couple returning favorites are the biggest changes on the Vermont touring series’ 32nd season of touring Late Model competition.

American-Canadian Tour teams prepare to take the green flag in last June's Spring Green at White Mountain Motorsports Park. The relocation of the storied event is only part of ACT's new schedule for 2023. (STS/Jeff Brown)

A first-ever visit to Stafford Motor Speedway, a return to a southern New Hampshire staple and a season-opening doubleheader in North Carolina highlight an ambitious schedule for the Vermont-based sanctioning organization, which celebrates its 45th season of points racing in 2023.

Thirteen races will tally points toward the ACT Late Model Tour championship, while three more non-points events round out a busy season that stretches from March to late October. 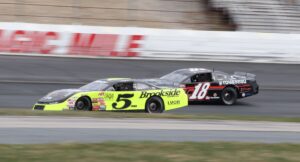 It’s a season that may prove a tough act to follow.

But ACT managing partner Cris Michaud is up to the task, with a schedule that retains the major anchor events of recent seasons while making a few token changes to freshen the Tour itinerary.

ACT’s 32nd season opens at one of the southeast’s most historic venues, Hickory Motor Speedway in western North Carolina, returning to Hickory with back-to-back non-points races in support of the Pro All Stars Series’ Easter Bunny 150 doubleheader. Three-time ACT Tour champ Wayne Helliwell, Jr. swept the two Easter Bunny preliminaries at the “Birthplace of the NASCAR Stars” in 2021.

The preseason road trip is the first of several events staged in conjunction with Maine’s PASS, building on a relationship forged in 2015. The relationship continues with the formal season opener for the ACT Late Model Tour a few weeks later. ACT and PASS will anchor the third Northeast Classic at New Hampshire Motor Speedway in mid-April, with a supporting cast yet to be named.

The ACT Late Models will make history two weeks later, visiting Stafford Motor Speedway for the first time. The popular Connecticut oval welcomes ACT on Saturday, April 29 in support of the 51st Spring Sizzler. ACT supplants the PASS Super Late Models as a supporting event for one of the region’s richest Tour-type Modified races. Though this is the first trip for the ACT Late Models, the organization has a history at the half-mile; ACT’s antecedent, the NASCAR North Tour, made five starts at Stafford through its final season in 1985.

Oxford Plains Speedway is one of only three tracks to host multiple ACT Tour events in 2023, with July and August features in partnership with Maine’s Pro All Stars Series. (STS/Jeff Brown)

May has a more familiar look as ACT makes its first stop of the season at the organization’s home track, Thunder Road International Speedbowl, for the 25th Community Bank, N.A. 150. Lee USA Speedway, absent from the 2022 schedule, returns to the itinerary in 2023 with the New Hampshire Governor’s Cup 150 on May 21.

Seekonk Speedway, Massachusetts’ only active paved oval, will assume a new race date next year after staging late-season thrill shows in 2021 and 2022. The “Cement Palace” will become the sixth different track to host ACT’s Spring Green in the event’s 48th running, taking the mantle from White Mountain Motorsports Park.

ACT returned to Canada last year for the first time since the COVID-19 pandemic, and the Tour will once again venture to “la Belle Province” twice. The Claude Leclerc 150, named for ACT’s still-active octogenarian “Ironman,” returns to Autodrome Chaudière in Quebec at the end of June. After an early-July ACT-PASS doubleheader at Maine’s Oxford Plains Speedway, the Tour treks to Autodrome Montmagny for the $10,000-to-win CAN-AM 200 on July 22. With border restrictions relaxed even further this fall, more American teams should be able to make the long trip north next year.

Despite the move of the Spring Green to Seekonk, White Mountain Motorsports Park has two major dates in the second half of the ACT Tour schedule. August opens with the Milton CAT Midsummer Classic 250, another $10,000-to-win show and the longest event on the calendar. After a few weeks off, the Tour makes its second stop of the year at Oxford, co-anchoring the evening before the 50th Oxford 250.

The transition of summer into fall carries a predictable trajectory for the Tour, with Thunder Road welcoming ACT home for the 45th Labor Day Classic on September 3. Two weeks later, the Tour returns to WMMP for the 45th running of the recently-revived Fall Foliage 200, another doubleheader date with PASS. As September ends and October begins, ACT circles back to Thunder Road, where the track’s season wraps up with the 61st Vermont Milk Bowl. The Milk Bowl has not been a points-paying event for years, but remains the most iconic ACT-sanctioned event of the year.

After a successful late booking at New London-Waterford Speedbowl, ACT will decide its 2023 championship at the coastal Connecticut oval. (STS/Jeff Brown)

After a month between points-paying events, the schedule concludes at New London-Waterford Speedbowl on October 21, where the ACT Tour and the Monaco Modified Tri-Track Series will crown their respective champions in a relocated “Haunted Hundreds” double-feature.

Conspicuously absent from the schedule is Thompson Speedway Motorsports Park, where ACT and PASS co-sanction oval racing throughout the season in a lease arrangement with the Hoenig family. While ACT’s Michaud and PASS’ Tom Mayberry confirmed another season of racing at Thompson in October, the year-ending Sunoco World Series is an open weekend not only on the ACT schedule, but the recently-released PASS itinerary as well. Both series have played headline roles in the World Series’ second day of action. Time will tell if a schedule adjustment is made as plans for the World Series firm up later in the year.

For now, though, the thirteen-race championship chase looks a lot like the schedules of the last two seasons. Only three tracks host multiple points races, giving racers a very different experience from the weekly grind of a track championship. Ample weeks off between events allow racers a chance to regroup after a bad weekend, or allow for a rescheduling of a rain-delayed feature.

And nine points races are held at tracks that either host or have a nearby track hosting weekly Late Models that follow the ACT rulebook, meaning those who do opt for a weekly championship get an opportunity or two to challenge the traveling stars.

Once again, ACT has found the delicate balance between its rich history of iconic events and a more diverse romp through the Northeast.

Even if the season gets off to a start in the heart of the Southeast.