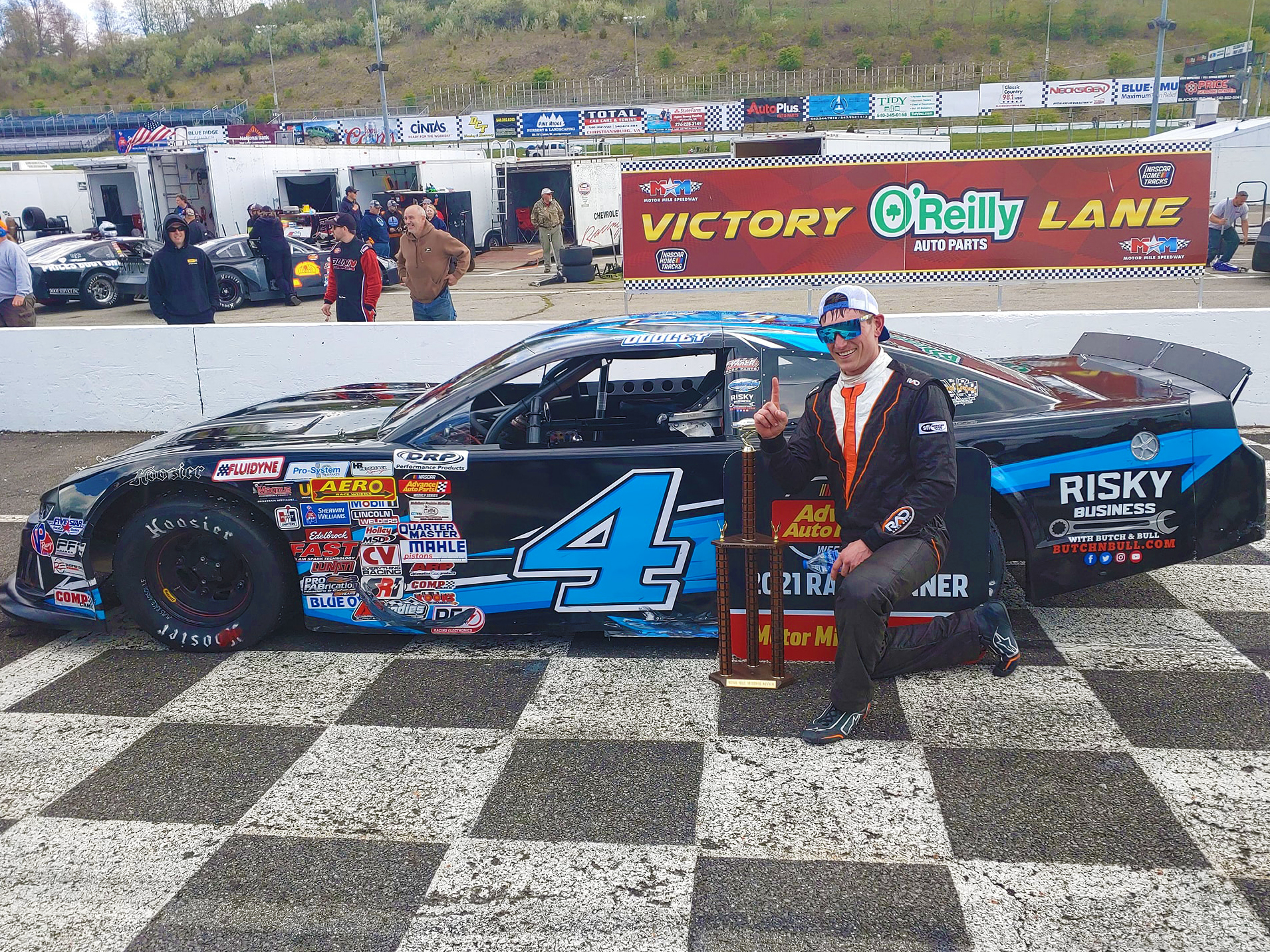 When Kyle Dudley began racing at Motor Mile Speedway, he had only dreamed of winning a Late Model Stock Car race at the New River Valley track in Virginia.  On Sunday afternoon, his dream came true.

The 29-year-old from Roanoke, Virginia, led every single lap of the first of two NASCAR Advance Auto Parts Weekly Series (NAAPWS) Late Model Stock Car features at Motor Mile Speedway – located just outside Radford, Virginia.  Dudley, who is the son of veteran racer Mike Dudley, had dreamed of winning a race at the track ever since he began racing in 2008.

“Winning a Late Model race up there seemed like a far fetched dream to me when I first started,” Dudley told Short Track Scene.  “It’s unbelievable.  It was such a cool moment with my mom (Rose) and dad in victory lane.”

Dudley is a five-time Late Model champion at Franklin County Speedway, a high-banked bullring in Callaway, Virginia and has won in a Limited Late Model at Motor Mile.  While known for his success at Franklin County, Dudley has performed well elsewhere as well.  He has won at Caraway Speedway and Orange County Speedway and has two top-10 finishes in the ValleyStar Credit Union 300 at Martinsville Speedway – the richest and biggest race in the discipline.

However, Motor Mile Speedway is historically one of the most difficult tracks to win at in Late Model Stock Car racing, a track that often paves the road to the NAAPWS national championship.

“Motor Mile has always been the toughest track around competition wise,” Dudley said.  “Just the names that have run and won up there, and all the national champions that have come through the place, it’s just crazy to be in the books with those guys.”

For Dudley’s part, much of his success outside of Franklin County has come in recent years – including the wins at Orange County and Caraway.

“It’s taken a lot of time and effort and a lot of good people helping me along the way,” Dudley stated.  “To finally start getting the results after taking my ass whoopings and to come from being a lapper in the way to winning races against some of the best Late Model competition around is such an awesome feeling.  I never would have dreamed it when I started as a lapper in Limiteds.”

So, will Dudley pursue the track championship in the New River Valley?

“I really quit getting into points,” Dudley said.  “I just want to win races every time out and, if points come with it, great, but I don’t worry about that.”

The second checkered flag at Motor Mile Speedway on Sunday was captured by Justin Carroll.