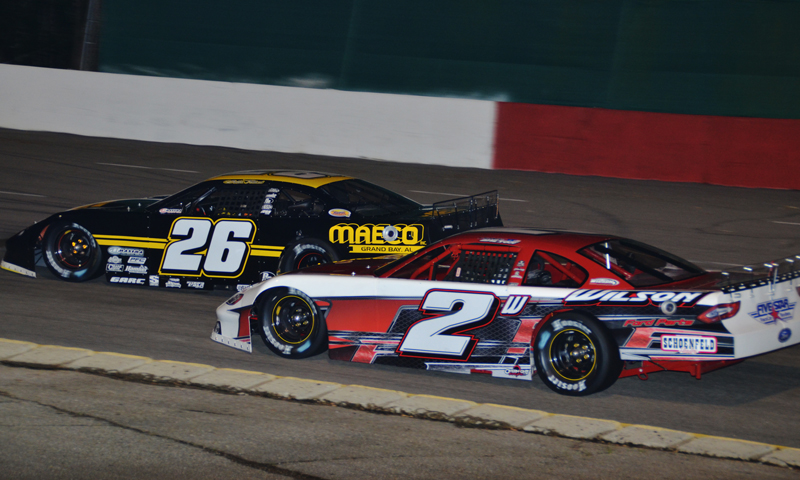 In its brief two-year history, the Southern Super Series has been defined by three men — Daniel Hemric, Bubba Pollard and Augie Grill. On Friday night at Five Flags Speedway, Pollard and Grill delivered yet another reason why, ending with Pollard scoring his fourth victory of the season in the Rubber and Specialties 125.

On two different occasions over the final 30 laps, Grill and Pollard raced side-by-side. Pollard dominated the first half of the race but Grill came alive during the second half, successfully passing Pollard on lap 98 to initiate one of the fiercest short track races in the history of the discipline.

On the lap 96 restart, Grill was unable to supplant Pollard who successfully used the outside line all night to get a jump on his rivals. But Grill drove deep into Turns 3 and 4 on the next lap and took the lead two laps later after shoving Pollard up the racing surface.

They raced side-by-side until lap 119 when Pollard at last overcame Grill and was able to cruise to Victory Lane. Grill fell all the way from first to fourth over the final six laps, his equipment used up from the battle with Pollard.

The win was Pollard’s fourth victory of the season and fourth in a row. It places him solely atop the Southern Super Series championship standings. The race establishes Pollard as the man to beat and Grill as the most likely to beat him.

“We felt like we had a better car especially on the long run,” Pollard said after the race. “On that restart, I had been so good on the outside but he was tough, he’s a wheelman and can drive a race car. I knew I was going to have my hands full and did.

“I put a lot of rear brake into my car during the break because it was getting tight. We come back and we were free once we put the tires on and while I was better than him in the center but I just couldn’t complete the pass. I was able to get behind him and put some front brake into it, drive to his door — just a hard battle that was a lot of fun and that’s what it’s about.”

For his part, Grill was disappointed but ultimately proud of the show that he and his long-time rival were able to put on prior to Memorial Day weekend.

“That was fun,” Grill said. “I think I burned my tires up running side-by-side with him there at the end. It would have been more fun if we could have won, but the car is in one piece and we were better than the last race here. That was a lot fun racing Bubba.”

Casey Smith entered the weekend tied for the championship lead but has seemingly been eliminated from contention after Friday night.

He was involved in a hard crash on lap 75 racing with 1994 NASCAR Whelen All-American Series champion David Rogers. Smith and Rogers were racing inside the top-10 and drifted into each other, sending Smith’s No. 99 hard into the wall.

The ordeal occurred just at the halfway break and Smith charged into Roger’s pit stall, ducking his head into the car for a few seconds until police separated the agitated driver from his rival’s pit crew.

Smith called Rogers a weapon and was left extra disappointed in their altercation because he doesn’t have a working backup car to race with on Saturday. In short, it likely means the end of his championship chase given all the points that will be available on Saturday.

“Every time someone is around (David), he’s running into them or getting involved with him. So there we were, one lap before the break and he just ran into the back of me, turned us into the wall — drivers side. It sucks because it’s a brand new car with only five races on it is drstroyed.”

Tempers flared elsewhere on the track a few laps later when Stephen Nasse was turned hard into the Turn 3 wall by Hunter Robbins on lap 77.

Nasse took tires during the caution prior to the halfway break and thus assumed the lead after the leaders pitted during halftime. But he did not have the same grip or speed as the frontrunners, causing him to sink through the field. This resulted in Robbins making contact with Nasse, sending him hard, nose-first into the wall.

Nasse said afterward that he’s given Robbins one too many chances over the years and that the issue will come up on the track again down the road.

“Yeah, we were a little bit off from the guys who were up front but I think we would have only fell to about fourth there,” Nasse said afterwards.

“Hunter Robbins — I’ve put up with a lot from that kid and I’m not putting up with it anymore. He had at least two inches on me and tried to move up. If I had two inches on somebody I would have let off and let him go and he’s had no common sense whatsoever. It’s going to come back and bite him someday. I’ve put up a lot from that kid and tonight was the final straw.”

Robbins was apologetic following the race but explained that there was little he could do to avoid contact with the struggling Nasse.

“He was just a sitting duck,” Robbins said. “And I know it wasn’t ideal because he had a flat earlier and had to (pit before the break.) We were on the outside on the restart and he got loose in the corner. At that point, I waited to roll in the gas because I didn’t know how much he was going to wash up the track and it happened on the straightaway again — he got loose again and we were just hooked together and I couldn’t get off him.

“There was nothing I could do and I hate it for him because that is a tough place to hit the wall.”

“I think he was trying to salvage what he could after having to pit early for the flat,” Rogers said. “He thought he had room to move up when we were actually farther up on him than he realized.”

After one of the most exciting races in the brief history of the tour, the Southern Super Series will turn around and do it again just a few hours later across Mobile Bay at Mobile International Speedway. Hemric is the defending winner.

The complete results and post-race video can be found below.

The Man in The Tower