It’s the one race a year where victory lane isn’t always the most comfortable place to be. 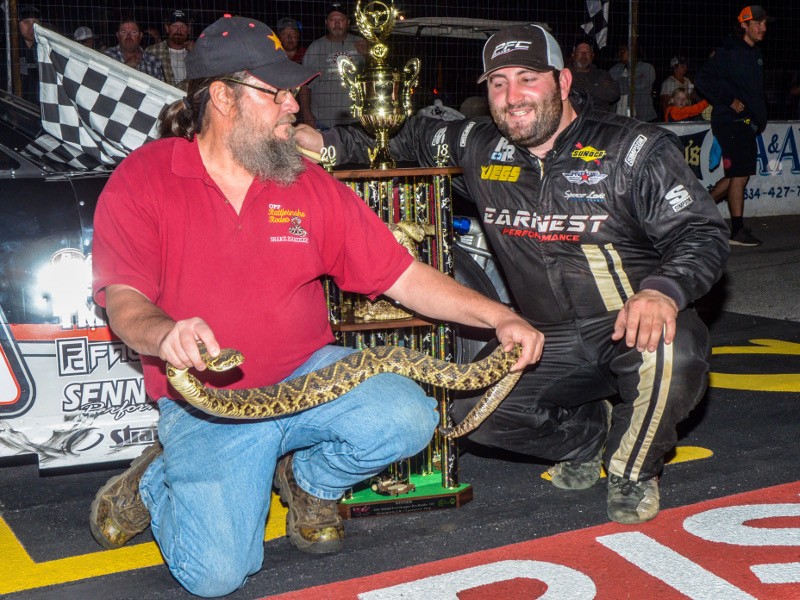 The Rattler 250 may feature the most frightening prize in the history of short track racing — just ask 2015 winner Christopher Bell.

Like all the winners before him over the past decade, Bell received a trophy that contained a coiled replica of a rattlesnake after defeating Harrison Burton and Chase Elliott that afternoon. He also had to pose with the real deal in Victory Lane and the picture of his face during the proceedings made national headlines.

“I’m not a snake guy, but I guess I can handle that one if it means I’m here in Victory Lane,” Bell said afterwards.

But his face told a completely different story.

The tradition dates back to the inception of the race nearly 40 years ago as a sister event to the City of Opp Rattlesnake Rodeo. Both events had snake handlers, beauty queens and of course … the snake itself.

This was expanded in 2005 when Jason Hogan won the first snake head trophy for his victory. That design has since been modified from a head in a glass case to an entire coiled up rattler. Combined with the winner having to pose with the real thing, second place might be the real winner Sunday.

Bubba Pollard won the race back in 2012 and honestly doesn’t remember interacting with the fanged serpent.

“I still don’t like snakes and don’t want nothing to do with them,” Pollard said. “If we can win our second Rattler, I think it will be pretty cool and pretty special. Back then, I was younger and I really don’t remember it much, but I don’t think we were very good that year. I think we have better race cars and are more prepared now, so it would be a lot more special to us.

Back when he was an active driver, Ross Kenseth made his feelings quite clear.

“The best snake is a dead snake,” Kenseth said. “Winning the Rattler is a huge accomplishment but it’s hard to balance that with the fact that you have to get in there with a rattlesnake.”

2018 Snowball Derby winner Noah Gragson attending the race in 2018 as a crew member for Carson Hocevar and may have left more scarred than any driver that came before him.

So @NoahGragson is not taking this whole snake demonstration thing well. He gets a solid A for trying though.@HBurtonRacing is giving him all kinds of crap for it.

"My pulse is out of control," Noah says pic.twitter.com/XWfaM5Y67K

Jeff Fultz of FURY Race Cars won the race back in 2010 and declined to take a picture with the snake. He wants to win the trophy again, but still wants no part of the snake.

“A few years ago, when I won that deal, they wanted to put that snake on my shoulders and I told ’em no way, keep it at arm’s length to take the photo and get it out of there; I hate snakes,” Fultz said. “Of course, at my age, if we win this thing again I might ask them if it bites and how long before it takes effect. I might just be willing to risk going out on top.”

The race will pay at least $12,000-to-win at a minimum, depending on the number of entries, but the poisonous exchange rate on Sunday might have someone second-guessing their life choices coming to the checkered flag.

“You might see a little less hesitation coming out of Turn 4 if the snake was lined across the start-finish line,” Pollard said.

Ty Majeski has thrice had that feeling.

“I still won’t want to do it,” Majeski said. “You get out of the car and you see that staring at you and you think to yourself, ‘What am I doing here?’

“But it’s all good. This is an important race and that snake is what we all talk about. You’re not comfortable with it but you want to have that experience. It’s special.”

Friday is the practice day for the Southern Super Series Super Late Models while qualifying and the Pro Late Model Baby Rattler is scheduled for Saturday night. The Rattler 250 itself is scheduled for 3 p.m. ET (2 p.m. local) on Sunday afternoon.

The entire Rattler 250 race weekend will be broadcast online via Speed51.com’s 51TV pay-per-view service for its annual subscribers and via a single-ticket PPV.