“Joey Pole” opened the 2021 GSPSS season the same way he closed out his 2020 season—in a Connecticut winner’s circle.

In the year of his title defense, “Joey Pole” was not about to wait that long.

“What an awesome track,” Polewarczyk said after taking the checkered flag in his first visit to the famed Connecticut half-mile. “Thanks to Stafford for having the Granite State Pro Stock Series.”

Saturday’s feature racing, anchored by the GSPSS’ Stafford debut, was to be the first of two days of on-track action for the speedway’s Spring Sizzler opening weekend, featuring the NASCAR Whelen Modified Tour. An unfavorable forecast for Sunday’s program prompted Stafford and NASCAR officials to preemptively postpone Sunday’s card to next Friday night, April 30. 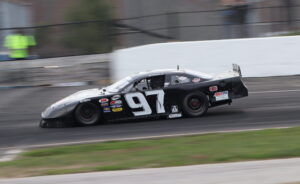 Polewarczyk’s familiar #97 was on rails for the long green-flag run to the finish. (Jeff Brown photo)

Polewarczyk started fourth after the post-heat redraw, but dropped back to eighth as the high line proved challenging early on. Two early cautions slowed the opening laps, one for a stalled car in turn two, and the second for a grinding crash that eliminated Vermonter Craig Bushey and two-time series champ Mike O’Sullivan only eleven laps in.

MacDonald brought the field back to the green flag, battling briefly with American-Canadian Tour sophomore Derek Gluchacki. But after four laps, a resurgent Polewarczyk broke up the party, slipping past Gluchacki and then MacDonald to take the lead.

“I loved that there were almost no cautions, and we were able to run our own pace,” Polewarczyk said of the long run to the checkers. “It feels really good to come down here to Stafford and win.”

Cory Casagrande (#7CT) and David Darling had a clean but tough battle for second, with Casagrande coming out on top at his home track. (Jeff Brown photo)

Hometown favorite Cory Casagrande prevailed in the battle for the runner-up spot. Letting the long run play into his hands, Casagrande worked his way past DJ Shaw with twenty laps remaining, then held off multi-time Seekonk Speedway champion David Darling for a career-best GSPSS performance. Casagrande’s family has a long and storied history in Stafford’s weekly ranks.

Early leader MacDonald, who traded his usual mount for a Fury-built car prepared by FAB Specialties, was fourth at the line. Derek Griffith, who pitted early for adjustments after dropping back at the start, drove from 17th to fifth, but with no cautions, he was unable to gain any more ground on the leaders.

Devin O’Connell, the 2018 GSPSS champion, was sixth, with Shaw falling to seventh in the closing laps. Gabe Brown, who started shotgun on the field after electrical issues sidelined him after time trials, was eighth, the final car on the lead lap. Gluchacki was ninth in a solid run for car owner Rollie Lindblad, with Angelo Belsito rounding out the top ten.

Saturday’s race, GSPSS’ first ever at Stafford, marked the return of touring Pro Stocks to a track that once counted the discipline among its weekly classes. A Pro Late Model open feature had been planned for 2020, but the pandemic squashed those plans. Maine’s Pro All Stars Series hosted the last touring Pro Stock/Super Late Model race at Stafford, a 2012 contest won by the late Ted Christopher.

Three drivers in that 2012 feature were in competition Saturday, with Shaw earning the best result of the three. Bryan Kruczek, making a move with car owner Bobby Webber, Jr. to a full-time GSPSS schedule in 2021, finished twelfth, two laps back. Mike O’Sullivan, out of the race early on, was the third.

Polewarczyk, a fixture on the ACT Tour at the time, was racing in Quebec that weekend, still a year away from his first GSPSS victory.

Indeed, Polewarczyk opened the 2020 season with an intriguing streak, having won in all three of his GSPSS attempts entering the season opener. The former ACT Tour champion and 2012 Oxford 250 winner came up short in the season’s first few races, but with solid top-five finishes piling up, Polewarczyk opted to stay the course.

And as early-season success for Ray Christian III and Angelo Belsito faded, Polewarczyk’s veteran sensibilities propelled him to the top of the standings. Polewarczyk topped crosstown rival Derek Griffith by inches for his first win of the year in September at Star Speedway. Three races later at the season finale at New London-Waterford Speedbowl, Polewarczyk was all but assured of the championship.

Leaving nothing to chance, he outdueled Belsito to close the season with another victory, marking his first full-season effort since 2015.

With Christian returning to weekly racing in 2021, Polewarczyk’s closest competition for this year’s championship battle appears to be Belsito and Gabe Brown, who plans to focus on GSPSS after three years touring with PASS.

With Saturday’s win, Joey Pole appears to be well-prepared for that battle.