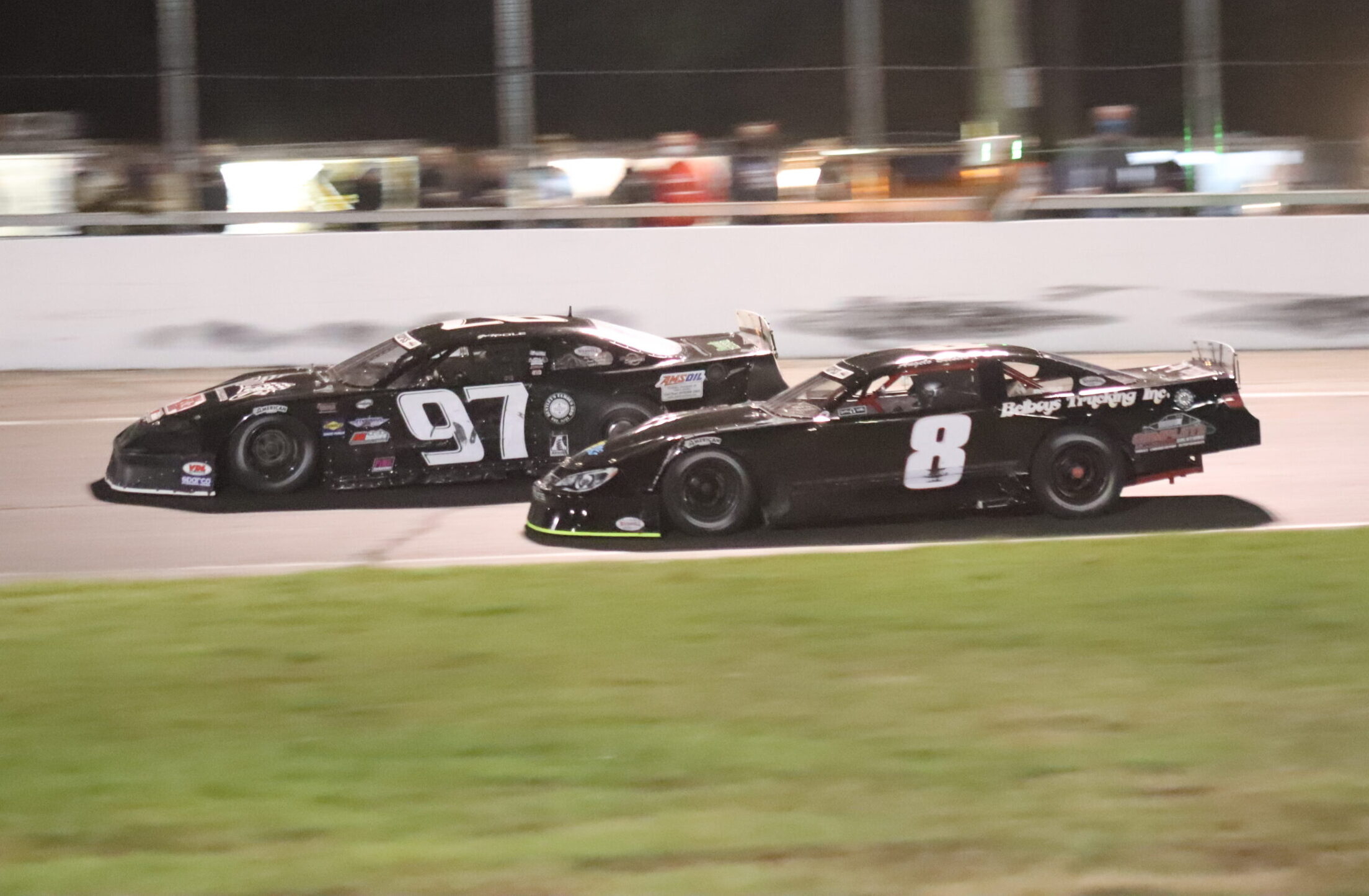 Joey Polewarczyk opened the 2020 racing season without a championship in mind.

When he arrived at New London-Waterford Speedbowl on Saturday, he was nearly assured of earning one.

And under the lights at the coastal Connecticut oval, “Joey Pole” left nothing to chance.

Polewarczyk edged out Angelo Belsito in Saturday night’s year-ending event for the Granite State Pro Stock Series, earning not only his second win of the season, but clinching his first GSPSS championship. 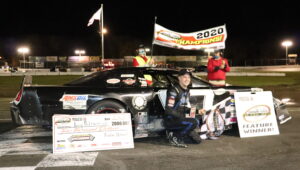 Polewarczyk celebrates his second win of the year and the GSPSS season championship. (Jeff Brown photo)

“I didn’t think that could happen twice in one year, a photo finish like that,” Polewarczyk said in victory lane.

The Hudson, N.H. driver started second and jumped out to an early lead, but it was runner-up Belsito who led the lion’s share of the 100-lap feature. Belsito, whose early-season success cooled in the late summer, left Polewarczyk to hold off title challenger Ray Christian III under a long green-flag run.

But Christian slowed on lap 61 with a flat tire, hampering his chances in a must-win race as he limped to the pits under caution. Christian returned to the race, but needed a big swing of momentum to keep his title hopes alive.

Belsito continued to show the way, but Gabe Brown entered the conversation in a big way on a lap-73 restart. Brown, who skipped the Pro All Stars Series finale to take a shot at a win at Waterford, made a bold three-wide move to steal second. A quick caution put Brown on the outside of Belsito with 25 laps remaining.

But neither racer gave an inch until Brown ran out of inches to give, spinning in the high groove and ending a promising run for the teen.

Once again, the race looked like Belsito’s to lose. A clean restart gave Belsito the advantage, until debris from a damaged car forced a caution flag for cleanup with seventeen laps left on the scoreboard. A multi-car incident in turn one negated the restart, with Joey Polewarczyk drawing alongside Belsito for the restart.

Seventeen laps left. Polewarczyk on the outside. With the exception of a less-familiar opponent, this looked a lot like Polewarczyk’s September win at Star Speedway.

Polewarczyk kept Belsito pinned to the inside as the two battled door-to-door for the win. A car-length back, September Waterford winner and Seekonk (Mass.) Speedway ace David Darling waited to pounce should either driver slip.

Polewarczyk finally broke free with a couple laps remaining, but Belsito charged back in a last-ditch effort to add a third win to his season total.

But as the checkered flag flew, Belsito could only get as far as Polewarczyk’s door.

“It was a good, hard race,” Polewarczyk said. “Angelo ran me really hard, but I respect the way he ran me, and I tried to respect him back.” 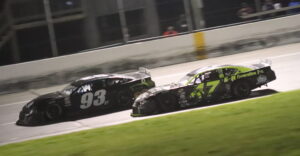 “I probably should have [taken] the top, but the bottom was paying off for me all night,” said Belsito, whose second-place finish was his best since a runner-up result in the Newport Chevrolet 150 on Labor Day weekend. “I could have wrecked him, but I’m a little bit cleaner than that.”

Darling crossed the line third, ending the season on a strong note with a win and two top-five finishes. Casey Call, who clinched Rookie of the Year honors, was a career-best fourth after a fifth-place run at Waterford in September. Two-time GSPSS champion Mike O’Sullivan was fifth.

Gabe Brown rebounded from his late spin and frustrations to finish sixth. Seventh was Ray Christian III, who ended the year with two disappointing outings at his home track. Seekonk Speedway regulars Fred Astle, Dylan Estrella and Tom Scully, Jr. rounded out the top ten. Thirteen of the night’s 22 starters completed the race, with a number of teams dropping out early after falling off the pace.

Belsito was fastest in time trials, but an unexpected rain shower swept in immediately after Polewarczyk’s lap, soaking the track and forcing officials to cancel heats to move the show along. Mike Mitchell was awarded the pole in the pre-race redraw.

Making Polewarczyk’s championship more intriguing is the fact that, at the start of the season, the decorated driver was nowhere near the title conversation. Not that he was any kind of underdog; he simply had no plans for a title run.

Since finishing second in American-Canadian Tour points in 2015, the 2014 ACT Tour champion and 2012 Oxford 250 winner had shifted to a so-called “outlaw” schedule, running select events in all three major New England tours while adding in some events on the road. Prior to 2020, Polewarczyk had only started three GSPSS races, winning all three.

Polewarczyk, who was winless but consistent in the first four races, suddenly emerged as a championship contender, if he opted to go the distance.

As the season heated up through August, heading into a busy fall, both Christian and Belsito met with misfortune. Christian struggled with handling issues at Claremont and a grinding wreck at Waterford, forcing him to finish the season in an unfamiliar car. Belsito made an early exit in a deep field at Beech Ridge and slumped in September.

Polewarczyk remained consistent, with a tenth-place at Monadnock his only finish worse than seventh all year. With his thrilling win at Star in September, Polewarczyk moved to the top of the standings for good. And even with two of the final three races at his home track, Christian was unable to capitalize.

“I can’t thank my crew enough,” Polewarczyk said. “I can’t believe it.”

Polewarczyk’s championship adds to a resume that includes his 2014 ACT title and big-ticket victories in the Oxford 250, the Vermont Milk Bowl, and the ACT Invitational held at New Hampshire Motor Speedway. Polewarczyk’s 20 ACT feature wins are second only to Brian Hoar. Another five wins in Pro All Stars Series competition, including a dead heat with Wayne Helliwell, Jr. in 2016, add to his legacy.

For Christian, Belsito, and others, the shortcomings of this season will have to provide motivation for next year’s championship campaigns.

Especially if, after the first few races, “Joey Pole” is anywhere near contending.