Joey Doiron may not be chasing a championship in 2021, but he’s having a pretty successful year.

“We really should have been second tonight,” Doiron said in victory lane. “Gabe [Brown] had us covered. It’s one of those nights where I’d rather be lucky than good. I hate it for Gabe, but it worked out in our benefit.”

Doiron was far from a dominant force. Instead, the veteran driver let the race come to him. Starting fourth, Doiron advanced to third while polesitter Evan Beaulieu and track favorite Bryan Kruczek led the opening stint.

In his first race for new car owner Dale Drew, Brown was on rails, pulling away from Doiron and building a lead of nearly a straightaway with ten laps remaining. Brown looked destined to claim his second career GSPSS win, another step toward clinching the series championship with two races remaining. 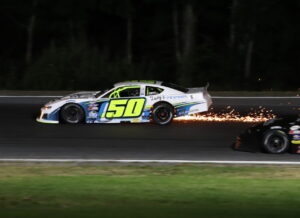 Gabe Brown dominated the feature until a flat tire ended his charge with only four laps to go. (Jeff Brown photo)

But with four laps to go, Brown slowed in a shower of sparks, a flat right front tire ending his hopes for victory.

Doiron inherited the lead, but faced the prospect of battling the tenacious Kruczek down to the wire. Two years ago, it was Ray Christian III who challenged Doiron in the closing laps, dooring Doiron out of the way and visibly frustrating the eventual champion.

Kruczek was poised to strike on the restart, but Doiron escaped, only for the caution to fly immediately as Jacob Dore was stuffed head-first into the turn-four wall. Dore walked away, but the race was red-flagged to clean up the mess.

Kruczek was gifted another shot at the lead, but was left to play defense when Ryan Kuhn dove for the inside of turn one. Kuhn drew alongside Kruczek, but lost control in turn two, looping his car to bring out another yellow flag.

The next time, Doiron never gave Kruczek a chance.

A two-time Pro All Stars Series feature winner in 2021, Doiron pulled away from Kruczek to secure his third Super Late Model touring win of the season and his first GSPSS victory since July 2019.

“It felt like we should have won a few races here,” he said, “but I’ve never been able to seal the deal. Finally got one. It’s unbelievable.”

Kruczek’s runner-up finish, his second podium of the year, was just short of expectations given the team’s success in May. “We were just too tight on the bottom all night,” Kruczek said. “I actually preferred to be on the top, but I just couldn’t do the restarts with him. All we could do was hang with him one time.”

Beaulieu, who led the first 16 laps, dodged the late-race carnage to rebound to third, a career-best touring performance for the part-time racer. “We’ve made improvements all year,” Beaulieu said. “I told Joey in victory lane, I’ve always wanted to run up front with these guys. We’re getting there. It was a great race.”

Patience proved to be the key to Beaulieu’s fifth GSPSS top-ten of the year. “We just did not fire off very well,” he explained. “It took our car a good ten laps to come in, and then we just never had a good ten-lap run. But after that, we came in really good. At the end there, we had some good restarts, and were in the right spot at the right time a couple times. I said before the race, we just have to keep the fenders on, and we’ll be there.”

Luke Hinkley was fourth after a late battle with Beaulieu for third, while 2018 GSPSS champion Devin O’Connell was fifth.

Doiron, Beaulieu and Oliver were among a close circle of racers Friday representing the Beech Ridge Motor Speedway community. Last week, the owner of Beech Ridge announced that the track was under contract for sale, with the speedway’s closure imminent. Early in the week, Star reached out to Beech Ridge’s entry-level weekly racers, inviting them to try one of Star’s similar classes through Classic Weekend. Other Beech Ridge graduates in the GSPSS field included Dore, Rusty Poland (who was caught up in Dore’s late wreck), Charlie Buxton, Ryan Green and Corey Bubar.

For more than a decade, though, Doiron has been recognized for his exploits on New England’s touring circuits. After years racing and winning under the PASS banner, the Berwick, Me. native moved to the Granite State Pro Stock Series. Doiron was second in the 2018 standings and captured the 2019 title with his family team.

Doiron opened the 2020 season with GSPSS, but opted for an “outlaw” schedule that included select PASS events and weekly features at Maine’s Oxford Plains Speedway. While Doiron was winless in seven GSPSS starts, he picked up his first PASS win since 2017 for car owner Wright Pearson and finished second in the Oxford 250 for car owner Greg Curtis and GT Motorsports.

This year, Doiron has focused on PASS, with wins for both Pearson and Curtis to his credit and a strong fourth-place finish in the Oxford 250. Doiron’s sole GSPSS start was at Beech Ridge in June, where he finished seventh for car owner Rollie Lindblad. He fielded his own familiar #73 in June’s PASS race at Hudson Speedway, where he was collected in an early crash.

In his second outing in the new Dale Shaw Race Cars piece, Doiron won for a third team, his own. “Second race on this new car we built this winter,” he said. “The first one didn’t go so hot, but we’re working the bugs out.”

Two rain delays and a couple red flags during heat racing made for a long first night of racing in the three-day Star Classic program. Saturday’s racing card features the anchor events of the weekend, the ISMA-sanctioned Bob Webber, Sr. Memorial Star Classic 125 for big-block winged Supermodifieds and the Dennis McKennedy Memorial 60 for 350 Supermodifieds. A Sunday program is headlined by the touring Modified Racing Series, with Star’s weekly divisions sprinkled throughout the schedule.

Only two races remain on the GSPSS calendar, Lee USA Speedway’s traditional Oktoberfest and Claremont Motorsports Park’s Fall Challenge. Despite his late-race misfortune, Brown still carries a healthy lead over Josh King in the GSPSS standings. The youngster already has a championship trophy in his collection, having clinched the 2018 Oxford Plains Speedway Super Late Model crown before he turned 16.

Unlike that championship, Brown will be able to celebrate the GSPSS title with a win in his hand. But in the next two events, the young racer will be looking for more.