The near certainty of a washout affected the track’s opening weekend for a second straight year. 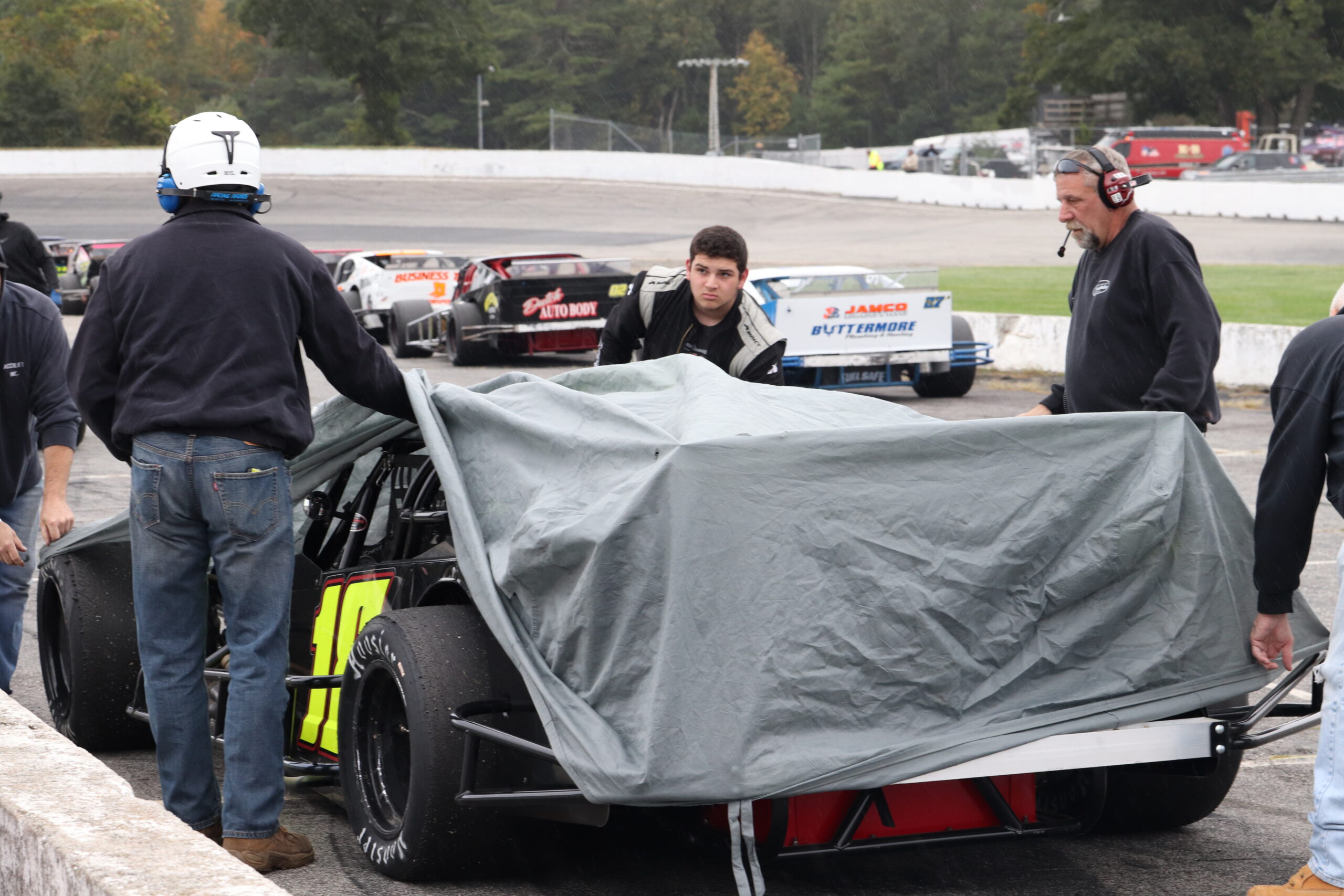 A team covers their car during a rain delay in last fall's Sunoco World Series at Thompson Speedway. (Jeff Brown/STS)

Some of New England’s short track racers will have an extra week to prepare for the start of the season.

Thompson Speedway Motorsports Park officials announced at the conclusion of Saturday’s Icebreaker features that the lidlifter’s third and final day, including the $10,000-to-win Outlaw Open Modified Series feature, had been postponed to next Saturday, April 9.

“The decision to postpone an event is one of the most difficult decisions we have to make in this business,” Michaud said in a press release Saturday afternoon. “Both Tom [Mayberry] and I felt this was the best decision to alleviate a wasted day for both fans and our teams. We can’t wait to see you all next Saturday!”

Last year’s Icebreaker, the first promoted by the team of American-Canadian Tour managing partner Michaud and Pro All Stars Series president Mayberry, met with a similar weather challenge. However, it was evident days in advance that Sunday would be a washout. Given the early notice, Michaud, Mayberry and their team reformatted the feature racing program into a single-day show, with Sunday’s features taking place Saturday evening after a brief intermission.

With cause for optimism in the forecast this year, and teams and fans committed to their travel and camping plans, there was good reason to hold off on rescheduling the second day of racing.

Next Saturday’s program is predominantly a “local” card, featuring Thompson’s Limited Sportsmen, SK Lite Modifieds and Late Models. But all eyes and admission dollars will be laser-focused on the Icebreaker 125 for the Outlaw Open Modified Series, introduced last year to sanction Thompson’s signature events after the departure of NASCAR’s Whelen Modified Tour.

Like October’s World Series, the Icebreaker’s multi-day format lends itself to travel, camping, hotel accommodations, and extended stays for teams and fans alike. Rescheduling such an event carries a tremendous risk. A fractured weekend is a bitter pill to swallow for everyone from fans in the stands to officials and track workers.

That said, rescheduling Sunday’s features may prove to be a winning move.

This year’s Icebreaker, after all, conflicted with NASCAR’s Tour date at Richmond (Va.) Raceway on Friday evening. While a few Tour teams were in the Thompson pits for Saturday’s practice sessions, many likely opted to choose between one event or the other.

With the Tour idle until mid-May, and Stafford Motor Speedway’s Spring Sizzler in late April the next major Modified show of note, this coming Saturday could be an appealing date for Tour teams that were hesitant to pull off the long-distance double.

Sunday’s cold and wet forecast was also likely to put a damper on last-minute ticket sales. If the weather holds as forecasted for next weekend, Saturday will be a far more attractive date for those who had not yet bought a ticket. Additional entries could have a positive effect on the grandstand gate as well.

Rescheduling the Sunday program, then, could be a blessing in disguise.

But, of course, only time will tell if those possibilities bear out.