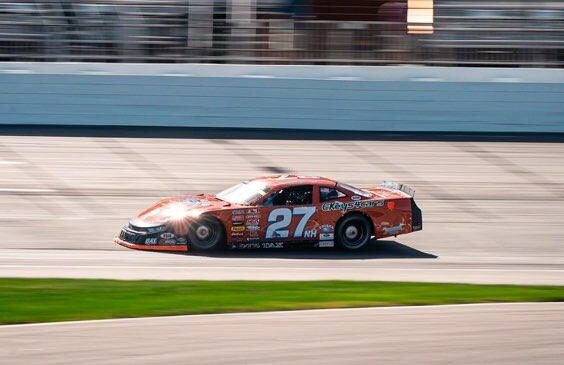 When Wayne Helliwell, Jr. last brought his American-Canadian Tour Late Model out to play, he put on a clinic at the biggest speedway on the schedule.

Friday night, at a much smaller venue, Helliwell put the same dominance on display.

The three-time ACT Tour champion started out front, but had no shortage of challengers early on. Stephen Donahue rolled off alongside Helliwell and was his earliest threat. But Mike Hopkins would give Helliwell the most pressure through the evening. Hopkins, making his ACT debut minutes after finishing third in the Pro All Stars Series Easter Bunny 150, charged past Donahue on lap 17.

From there, Hopkins gave chase, closing on Helliwell in lapped traffic. Twice, the 2019 PASS National Super Late Model Champion got a nose on Helliwell at the line, only for Helliwell to ease back into the lead through the first turn.

Four cautions in quick succession pared back Helliwell’s list of challengers in a matter of laps, starting with a lap-50 bobble for Reilly Lanphear. Brooks Clark, running fifth at the time, drilled the slowing Lanphear down the backstretch, bringing out the night’s second caution flag. A lap after the restart, Shawn Swallow spun in turn two, bringing out another yellow. Jamie Swallow, Jr., who was running third when his brother spun, pulled down pit road under caution with a broken sway bar mount ending his evening. Another quick caution bunched the field up, setting up a wild lap-56 restart where Tom Carey III found himself on the losing end of a three-wide battle with Donahue and Ben Rowe.

The race was uninterrupted for the final 69 laps, while Helliwell attempted to distance himself from Hopkins. Hopkins would draw closer in lapped traffic, the two carving through packs of slower cars like jammers in a roller derby bout. Helliwell would break free first, pulling away while Hopkins attempted to chase the veteran down.

But in the final ten circuits, Helliwell had clear track ahead, nothing slowing the Dover, N.H. driver from collecting his sixteenth career ACT-sanctioned Late Model victory.

Helliwell, the Tour champion in 2012, 2013 and 2015, switched his focus to Super Late Models in 2016, winning that summer’s Oxford 250. Since returning to Tour action part-time in 2019 with car owner Bruce Bernhardt, the veteran racer and chassis expert has three wins in seven Tour appearances, plus Friday’s non-points triumph.

Hopkins, meanwhile, completed an evening podium sweep with his runner-up finish. Fellow PASS veteran Ben Rowe, winner of last year’s ACT Tour finale, was third in his own double-duty performance. Trent Goodrow and Chip Grenier rounded out the top five, the last cars to finish on the lead lap.

Even without the top five points contenders from last year’s ACT Tour results, and even without points on the line, the support for the first ACT Tour event outside New England since 2019’s Commonwealth Classic at Richmond (Va.) Raceway has been encouraging. Twenty-seven cars answered the call for Friday night’s feature, with one or two left on the sidelines after practice.

The ACT Tour will take center stage again following Saturday’s 16th Easter Bunny 150 for the PASS Super Late Models, with their own Easter Bunny 125 closing out the evening.