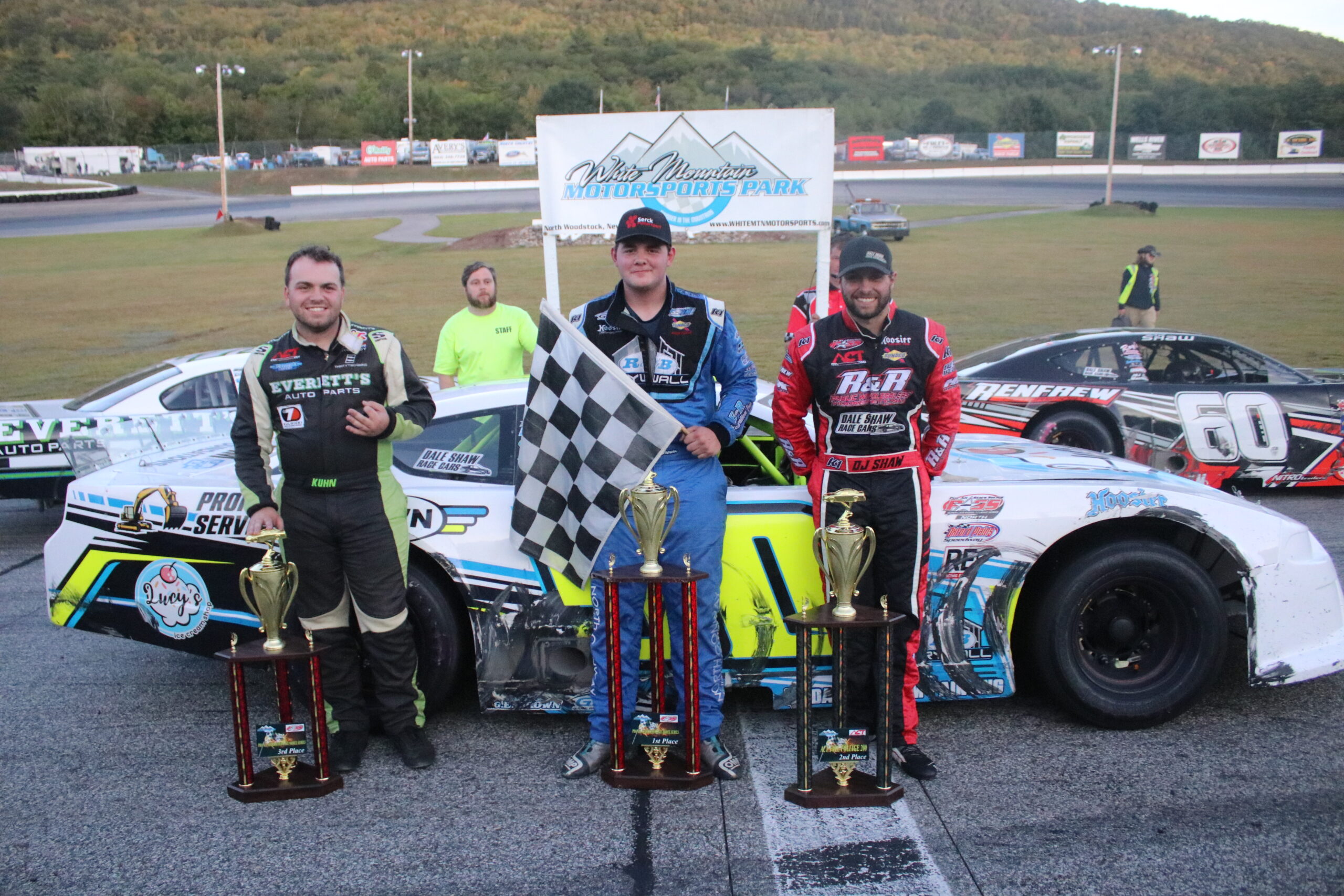 UPDATE Sept. 20, 2022: After a manual scoring review and technical inspection, PASS officials awarded the victory to DJ Shaw, with Gabe Brown scored second. The results below have been updated in accordance with Monday’s announcement.

Gabe Brown spent a few years trying to earn his first Pro All Stars Series victory. It only took a couple months to earn his second.

Brown prevailed in a late battle with DJ Shaw to win Saturday’s PASS North Fall Foliage 150 at White Mountain Motorsports Park, his second career PASS win and his second of the season.

Saturday’s race was originally planned for Sunday afternoon, but a doubtful forecast prompted officials to move Sunday’s program to Saturday, cramming the day full of action as the PASS-anchored program warmed up the crowd for the evening’s American-Canadian Tour Fall Foliage 200.

Brown took the lead 20 laps into the feature when early leader Dillon Moltz lost a tire, but the young racer faced a challenge from seven-time PASS North champion Johnny Clark. Clark, a winner earlier in the season at WMMP, vaulted into the lead on a lap-50 restart, looking for back-to-back wins after late-race disappointment in the Oxford 250.

Shaw, a former WMMP track champion with both ACT and PASS wins at the track in 2022, slipped past Brown to take second on lap 65. While the five-time PASS champion could get close, he could not get around Clark, who was well on track for his fourth win on the season.

But with only a few laps remaining, a trailing arm broke on Clark’s car. The veteran struggled to keep his car under control, finally spinning in turn one, bringing out a caution. Clark was relegated to 15th, his first finish outside the top ten all year.

Shaw assumed the lead with Brown alongside him for the restart. Brown, the protégé, battled his mentor hard in the final three laps, with Shaw pinned to the inside groove but leaning on Brown to trip up the youngster. Unintimidated, Brown nosed ahead off turn four to nip Shaw by 0.003 seconds.

Jeremy Davis was sixth in his third PASS start of the year, all at WMMP. Max Cookson was seventh, as the newly-crowned Oxford Plains Speedway Super Late Model champion prepares for a full-time PASS assault in 2023. Jake Matheson finished a stout eighth, with Bobby Therrien ninth in his season debut. Ben Rowe, in his third race in the Rowe Family Racing entry owned by father Mike, finished tenth.

Thirty-two cars showed up for Saturday’s race despite the rescheduling, with Mark Patten and Joey Polewarczyk unable to make the call for the green flag.

Brown’s victory, his fourth for car owner Dale Drew, comes a year to the day after the young Center Conway, N.H. racer made his debut for Drew in a Granite State Pro Stock Series race. Drew, one of Brown’s sponsors, decided to jump into car ownership late in 2021, then called on Brown to drive his car once it was complete. Brown nearly drove the car to victory on their first night together before a flat tire relegated him to seventh. Brown bounced back with a win at Lee USA Speedway a couple weeks later, then won the GSPSS season opener this April.

Keeping his own family car as an alternate, Brown has run most of the PASS North schedule this year for Drew, picking up his first PASS win in July in a close battle with Joey Doiron.

Often criticized for his aggressive style, Brown has worked to find a rhythm this year. Indeed, in thirteen starts, Brown has only finished outside the top ten once, picking up three third-place finishes and two more top fives in addition to his two wins. A heat race crash at New Hampshire Motor Speedway left Brown with minimum points for his appearance, but entering the weekend at WMMP, Brown was still well within reach of the championship lead with plenty of time to make up ground.

Brown may be grasping how to be a big-picture racer, but he still has the aggression necessary to go toe-to-toe with PASS’ top racers.

Brown proved that on Saturday.