Kruczek Comes Out On Top In GSPSS Bullring Brawl At Star 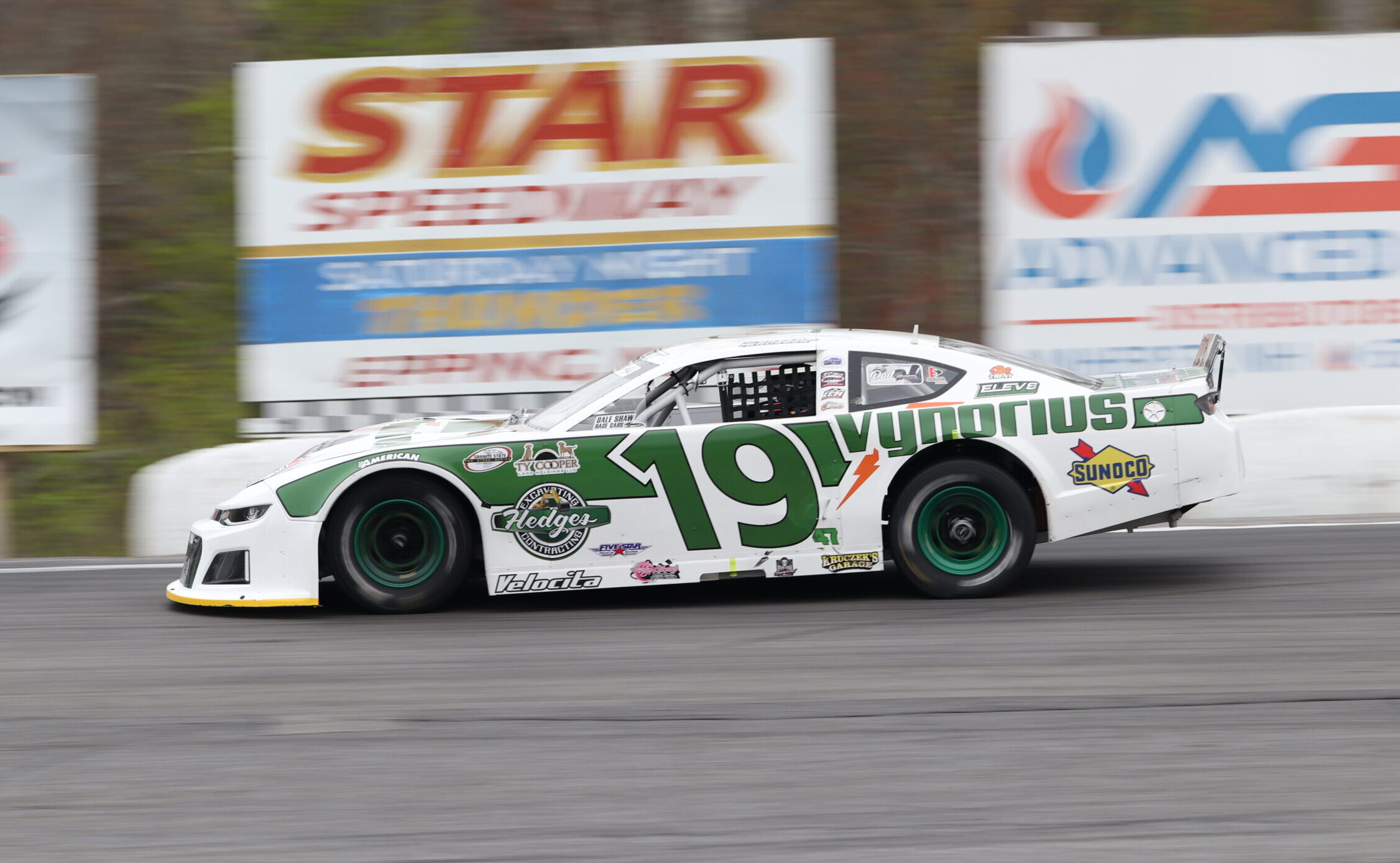 If Bryan Kruczek’s resolve to win at Star Speedway was in doubt on his first trip through the field, it was certainly obvious on his second.

On the third trip, it was crystal clear.

And while racing for track owner Bobby Webber, Jr. may seem like a direct path to Star’s brick-paved victory lane, the battle scars down the sides of Kruczek’s white-and-green Vynorius Companies Chevrolet told a different story.

“I’m out of breath,” Kruczek said in victory lane. “I had to pass a lot of cars out there.”

Bryan Kruczek waves as he crosses under the checkered flags for his first-career GSPSS win at Star Speedway. (Jeff Brown photo)

Saturday night’s race already carried high expectations, with the GSPSS’ last two visits to Star ending in door-to-door duels to the checkered flag. This time, Kruczek’s win was decided well before the stripe, but there was no shortage of fireworks or frayed tempers through the field.

The veteran racer from Newmarket, N.H. had served notice earlier in the afternoon, earning the pole in time trials and fending off Gabe Brown for a heat win. But Kruczek’s seventh-place start, by way of a redraw, left him in harm’s way when Jacob Dore went around in turn two only ten laps in. Kruczek emerged from the fracas in fifth, but peeled off for pit road under caution, lining up at the rear.

While Kruczek worked through traffic, Angelo Belsito set the pace, leaving Joey Polewarczyk and Devin O’Connell to race for second. Polewarczyk cleared O’Connell and was pressuring Belsito for the lead when another collision deeper in the pack left Mike Mitchell and Luke Hinkley with terminal damage. Once again, Kruczek dipped into the pits for service.

O’Connell turned the heat up after the restart, moving to second and taking the lead from Belsito on lap 33. Polewarczyk and Gabe Brown followed O’Connell, with the Monadnock winner trying to settle into a rhythm in fourth place.

Kruczek was just outside the top five when contact on lap 43 scrambled a tight race ahead of him. Kruczek was turned around, Belsito was collected, and Kevin Casper dodged the melee through the turn-four grass. While all escaped unscathed, Evan Beaulieu was sent to the rear for his involvement.

Polewarczyk lined up outside of O’Connell for the restart. Drawing on his late-race heroics in last September’s GSPSS tilt at Star, “Joey Pole” used the outside line to his advantage, nabbing the lead as a quick caution came out for a single-car spin. Polewarczyk took control from the inside line next, leaving O’Connell to hold down second with Brown a distant third.

While Polewarczyk built his lead over a long green-flag run, Kruczek carved his way through traffic once again. With thirty laps remaining, Kruczek worked his way into the top three, passing Brown, then O’Connell, then quickly closing the gap to Polewarczyk’s rear bumper. Kruczek dove under Polewarczyk entering turn one, pinned his car to the inside, and surged into the lead.

Kruczek was only a couple car lengths ahead with seven laps to go when Beaulieu and Brown spun fighting for fifth, bringing out another yellow flag. Restarting from the outside, Polewarczyk was again able to inch ahead with only a few laps remaining.

But Kruczek muscled his way from the inside line to take the lead, opening the door for O’Connell to look inside of Polewarczyk. With two laps to go, O’Connell dove under Polewarczyk, breaking free and sending both cars into a slide in turn four. Polewarczyk spun high to bring out the yellow flag once again. Polewarczyk pulled into the pits, out of contention, while officials sent O’Connell to the rear.

Josh King lined up alongside Kruczek for the restart, now with an outside shot at his second career GSPSS trophy. But Kruczek had the field covered in the final two laps, cruising home to his first series win.

King, who exited last week’s race early, held on for the runner-up finish, his first top-five since 2018.

“We did have a shot,” King said of his best series result since a 2017 win. “We tried to save a little bit at the end for the leaders.”

Jacob Dore started the evening with a scare, when crew members caught a flat tire on the car while staging for the race. Dore’s team had the tire plugged, avoiding a tire change and a start at the rear of the field. The former Star Speedway weekly Modified champion was buried in the field early after a spin, but soldiered on for a third-place finish in his first GSPSS start since 2019.

“We plugged the tire, because we didn’t think we’d want to come from the back,” Dore said with a laugh. “But Bryan helped us out, let us start back there. He drove through the field three times … I only had to do it once. But it was pretty good for our first time out in a couple years.”

Angelo Belsito recovered from his early issues to finish fourth. American-Canadian Tour regular Derek Gluchacki, in his second start for veteran car owner Rollie Lindblad, delivered one of the team’s best efforts in recent memory with a fifth-place result.

Tyler Tomassi was sixth in the running order, with Gabe Brown and Evan Beaulieu coming home seventh and eighth after their late-race incident. Devin O’Connell was ninth at the line after his late penalty, with Kevin Casper rounding out the top ten.

Belsito’s best-in-class result among the points challengers leaves him atop the point standings with three races complete. O’Connell, the 2018 GSPSS champ, and Brown are in a tight battle for second. Belsito is the only of the title contenders with a win this year, as neither Kruczek nor Stafford winner Polewarczyk are running full-time.

Championship aspirations or not, though, the expectations for Kruczek and car owner Webber were high entering the season.

Kruczek, a two-time Pro All Stars Series feature winner, joined forces with Webber before the 2019 season. Webber, whose family has owned Star Speedway since 1980, had fielded a variety of race cars at the track as well, and had dipped his toe into Late Model racing in 2018 with a car adorned in memory of his father, Bob Sr., who passed away early that year.

The Kruczek-Webber tandem caught fire, winning their first ACT Tour points race together and adding a second later that year in a limited ACT schedule. Over the offseason, Webber and Kruczek devoted themselves to a full-scale ACT Tour title assault for 2020. Early-season misfortune left Kruczek fighting from behind, but a win at Riverside Speedway in Groveton, N.H. helped the team rebound to third in the year-end standings.

Webber’s team realigned in the offseason to focus instead on the GSPSS for 2021, with plans to run the bulk of the schedule. A lackluster showing in the season opener at Stafford inspired testing for the following weekend. Kruczek and team put the finishing touches on the car in a Friday practice session, hoping to shine their brightest at the team’s home track.

Saturday’s race, only the sixth of Kruczek’s GSPSS career, was his fourth touring win with Webber so far.

And there is still the better part of a racing season yet to come.