Preece and Coby head to New Smyrna with different agendas 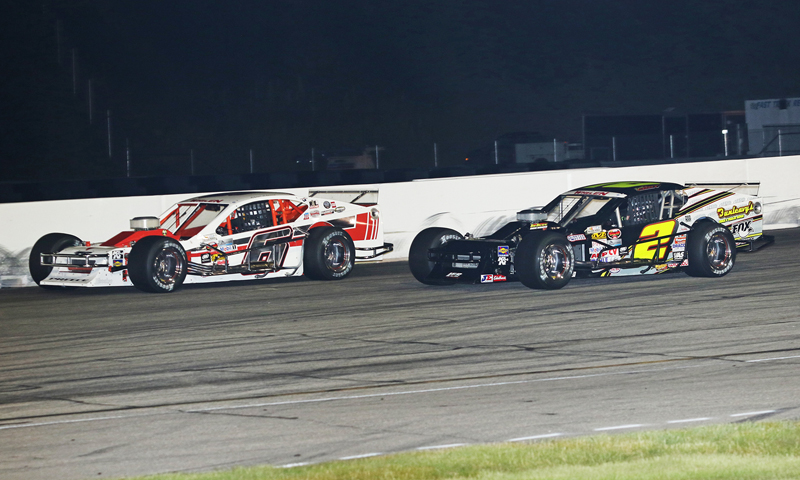 Two former NASCAR Whelen Modified Tour champions are going back to New Smyrna Speedway with different overall agendas, but the same goal of winning races — something they both have a track record of doing.

Doug Coby and Ryan Preece want to win as much as possible during the 53rd annual World Series of Asphalt Stock Car Racing, but they also will be heading in different directions by the end of the week.

For Coby, the opportunity to head to New Smyrna’s World Series will come with the chance to rebound from a 2018 season that didn’t live up to his standards. The Milford, Connecticut, driver, who won four straight titles from 2014-17, finished third in the championship standings in 2018 and watched fellow LFR Chassis driver Justin Bonsignore dominate the series — much like Coby did himself for many years.

He is hoping to use New Smyrna as a way to find some additional speed and get a jump start before the Whelen Modified Tour takes the green flag at Myrtle Beach Speedway on March 16. It will be his first attempt at the entire week.

“We want to keep the bar set high and this is our opportunity to finally say that someone else has proven that they can’t only knock us off for wins, but a championship. Our thought is we need to get the car on the track before the season starts,” Coby said. “Myrtle Beach comes so quickly, and South Boston is right after that. We have to get the car on the track to try some different things.”

Over his tenure as champion, Coby was dominant for much of the season — winning seven races in 2015 and coming back to win five in 2016. But, over the last two years, Coby has just one win during each campaign. For the veteran, he feels like it’s time for a few changes.

“When you win a lot of races and championships in all different ways, you really can’t change that much about your program,” Coby said. “As we were winning the championships, we saw it happening, and we knew we had to run the same setups at the tracks we were fast at and last year was finally the year where someone else had stepped up their game so much that now we have to make changes.”

Preece, on the other hand, is going to be in Florida for more than just a week. He will compete in practice and qualifying for the 61st annual Daytona 500 this weekend, before moving over to the high-banks of New Smyrna starting on Monday night. Preece will run the first three tour-type Modified division races of the week — Monday, Tuesday and Wednesday — before turning his focus to winning NASCAR’s most prestigious event.

The Berlin, Connecticut, driver won three straight championships at the World Series from ’15-’17, but came up short of a fourth straight last year. He did wrap last year’s week of racing by winning the prestigious Richie Evans/Ted Christopher Memorial 100 for the third time in four years.

“It’s just a place that I got my feet wet with the modifieds. I’ve been going there a long time,” Preece said. “There really isn’t anything like it. Dirt racing has race weeks like this all the time, but we don’t. Any chance we have like this to race five nights in a row, it’s a good opportunity to go out, try some new things and jump start your season.”

Preece was part of a test session last weekend, preparing the best he could for the week, knowing that when he shows up to jump in the car on Monday, it’s going to be time to get right down to business. Last year, he struggled early in the week with mechanical issues in the rear-end of his car.

“I did as much as I possibly could. I think every person can ever say that you never feel like you had enough time to get the car done,” Preece said of his preparation. “But trying to get the JTG deal ready, every waking minute that I have had outside of the Cup car, I have been at the modified race shop. The track hasn’t changed. I’m going there with something a little bit different, because we weren’t able to carve through the pack like we had in the past. We got our mechanical problems out of the way, so now we just need to go down and fine-tune and have some really good speed off the truck.”

Both Coby and Preece are among a stout list of drivers set to compete for the title in an effort to get momentum rolling. The World Series begins on Friday night with the Super Late Models as the headliner of opening night, but the tour-type Modifieds will roll in on Monday for the first time. Teams will compete in five races from Monday through Friday — including the John Blewett Memorial 76 (Wednesday) and the Richie Evans/Ted Christopher Memorial 100 (Friday).

Eight nights of NASCAR Whelen All-American Series racing, including the five Modified nights, will air via a live stream on FansChoice.TV.

The Modified entry list includes stout competition of the NASCAR Whelen Modified Tour, with names like Timmy Solomito, 2018 Sunoco Rookie of the Year Tommy Catalano and Patrick Emerling among those ready to compete. Jimmy Blewett, who won the title in the SK Modified division at the World Series in the past, is also heading down looking to return to winning form as well.

Even though Preece has plenty of experience racing the half-mile, Coby can’t say the same. He does have one start at New Smyrna, back in 2014, but even that didn’t give him much time on the track.

“I had never seen it before 2014,” Coby said. “I hadn’t even gone down as a spectator. Qualifying got rained out and we had to start last and I think we finished fifth, but this is going to be different. I’m not going down there with any knowledge of how the car is going to be from the 35-lapper to the 76 and the 100. It’s a good challenge. It puts me in a spot where it’s good for Myrtle Beach and South Boston because I’m not good at Myrtle Beach. We need to build a notebook and hopefully building one at New Smyrna will help us build one for other tracks.”

Coby made his first Whelen Modified Tour start in 2002, but won the Late Model championship at Connecticut’s Stafford Motor Speedway in 1998, so he has been part of the grassroots racing environment for his entire career. Preece, who won the 2013 Whelen Modified Tour championship, made his first start in 2007, and also has experience running in the short tracks of the northeast at Stafford, Thompson Speedway Motorsports Park and Riverhead Raceway, just to name a few.

Coby is staying in the Modifieds and will look to continue to etch his name deeper into NASCAR’s record books. Preece is taking an opportunity to go Cup Series racing and trying to be successful at his own endeavor. Through it all, both of them still find the time to have some fun over social media.

“I’ve been in the modifieds forever. I have a lot of passion for it and it is something that has helped build my career. You heard Kevin Harvick talk about it last year, there was a disconnect between NASCAR and the grassroots. I’ve done the grind and I’ve struggled,” Preece said. “I got the opportunity that a lot of us try to get. Am I going to forgot about going to the shop on Monday and working Tuesday, Wednesday and Thursday, then racing Thursday, Friday and Saturday and running all of these races? No. I don’t forget about those things. That’s what made me who I am today.”

Coby is ready to begin his quest for another title next month.

“For me, it’s just getting back to the consistency of top three and five finishes every week and that’s how wins come your way. I think we lost that the last two years. We quietly had a strong second half of the season last year, but we have to make sure the whole season goes that way,” Coby said. “Our goal is to step up and spread the wealth out a little bit more, and that’s I’m sure what all of their goals were when I was winning six or seven races. I’d be really happy to win six of eight. Just because we didn’t win in 2018 doesn’t mean we can’t pick up where we left off.”