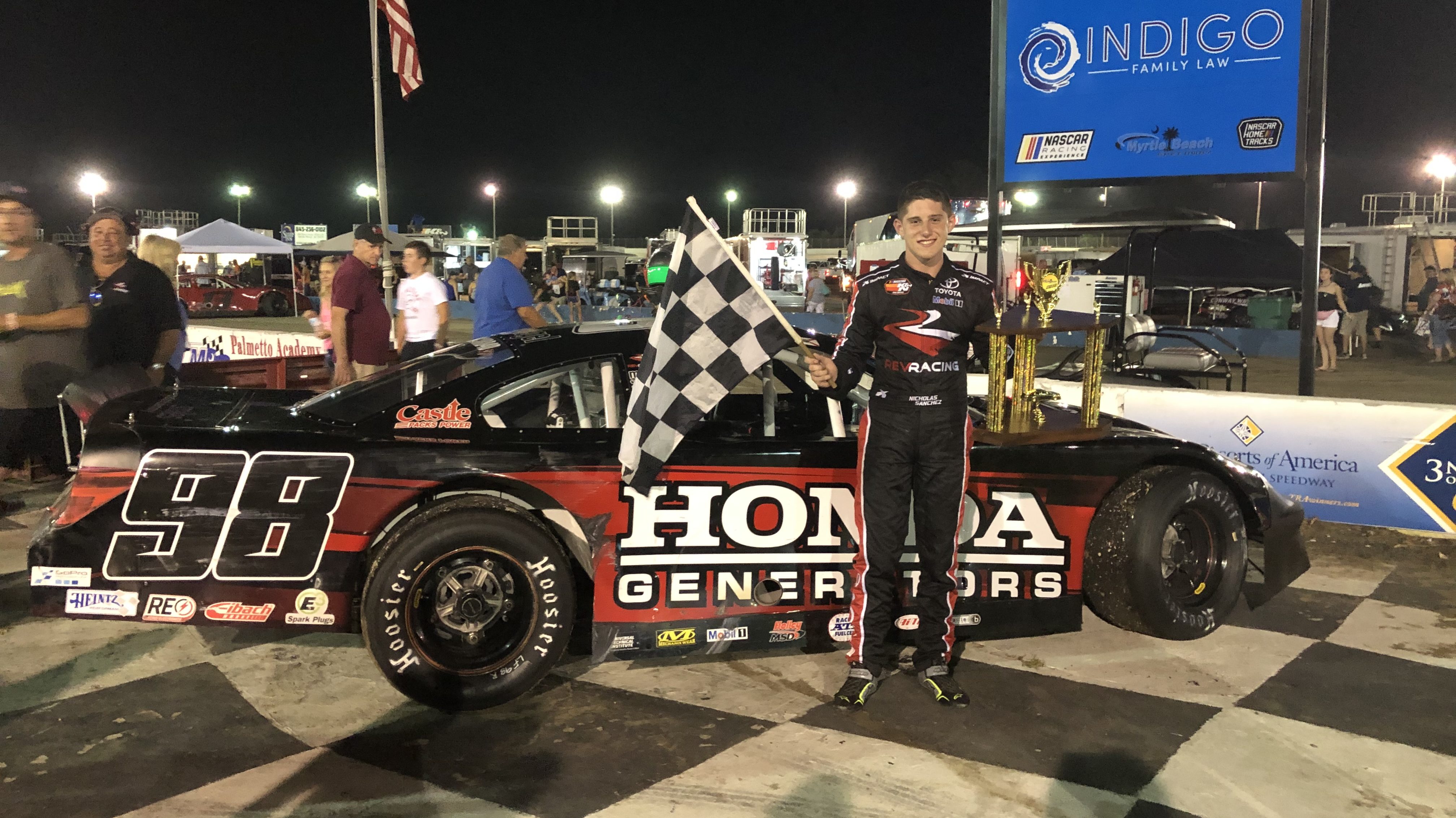 Nick Sanchez and his team at Rev Racing have “wanted a win in the worst way” this season, he said Monday. After three runner-up finishes and three thirds among his first 10 races, he finally got that first late model victory Saturday night at Myrtle Beach Speedway in the Summer Sizzler Late Model Twin 40s.

Sanchez went into the race 12th in the NASCAR Whelen All-American Series Division I standings. He emerged the weekend in fourth.

The 17-year-old has traveled throughout the Southeast this season, racing at Virginia’s South Boston Speedway, Larry King Law’s Langley Speedway, and Motor Mile Speedway, and Hickory Motor Speedway, in North Carolina. He has 10 top-5s and 12 top-10s in 12 races.

Sanchez’s team, Rev Racing, is the competition arm of NASCAR’s Drive for Diversity Program, and serves as the NASCAR-supported racing team charged with developing female and minority drivers and pit crew members in the NASCAR development series for future competition at NASCAR’s highest levels. The Miami, Florida, driver got his start with Rev Racing running in its Legends Car program before moving up to Late Models.

Sanchez qualified second in the first of the twin races Saturday, and spent the 40 laps mostly just riding around and making sure he didn’t burn up his stuff.

An invert of the top 10 in the second race put Sanchez 7th, but by Lap 3 he was back up in the top two.

“At that point I had been trying to pace myself,” he said. “Even though I knew I was faster than first, I just paced myself and I think by lap 15 we took the lead and from that point on we kind of pulled a gap to second.”

After allowing second place to pull within a car length, by Lap 30 he had pulled a three-second gap, and ran the rest of the way up front for the win.

“Honestly, I don’t want to say I wasn’t excited because I was, but I was kind of just like almost in awe of what just happened,” he said. “I think the last time I won was two or three years ago, so I was just kind of taking it all in.”

Sanchez has two pole wins this season, and also has a pole and top 10 finish in two NASCAR K&N Pro Series East races.

He said this season has been amazing compared to last considering his team has been in every race and has had a shot to win every week.

That success has felt even better considering he has been racing against some of the best late model drivers in the country.

“At South Boston, we went there three races ago, I had a 50-lap battle with (four-time NASCAR Whelen All-American Series national champion) Lee Pulliam,” Sanchez said. “Racing someone like that, you can just take notes on it on all the little things he does because you know he’s doing it right.”

Sanchez’s season is about midway through, and with the win Saturday he’s setting his sights on a new goal – a national championship.

While he said it’s still a long shot, as long as he and his team continue what they’re doing, they have a chance. And staying in contention is enough for him.