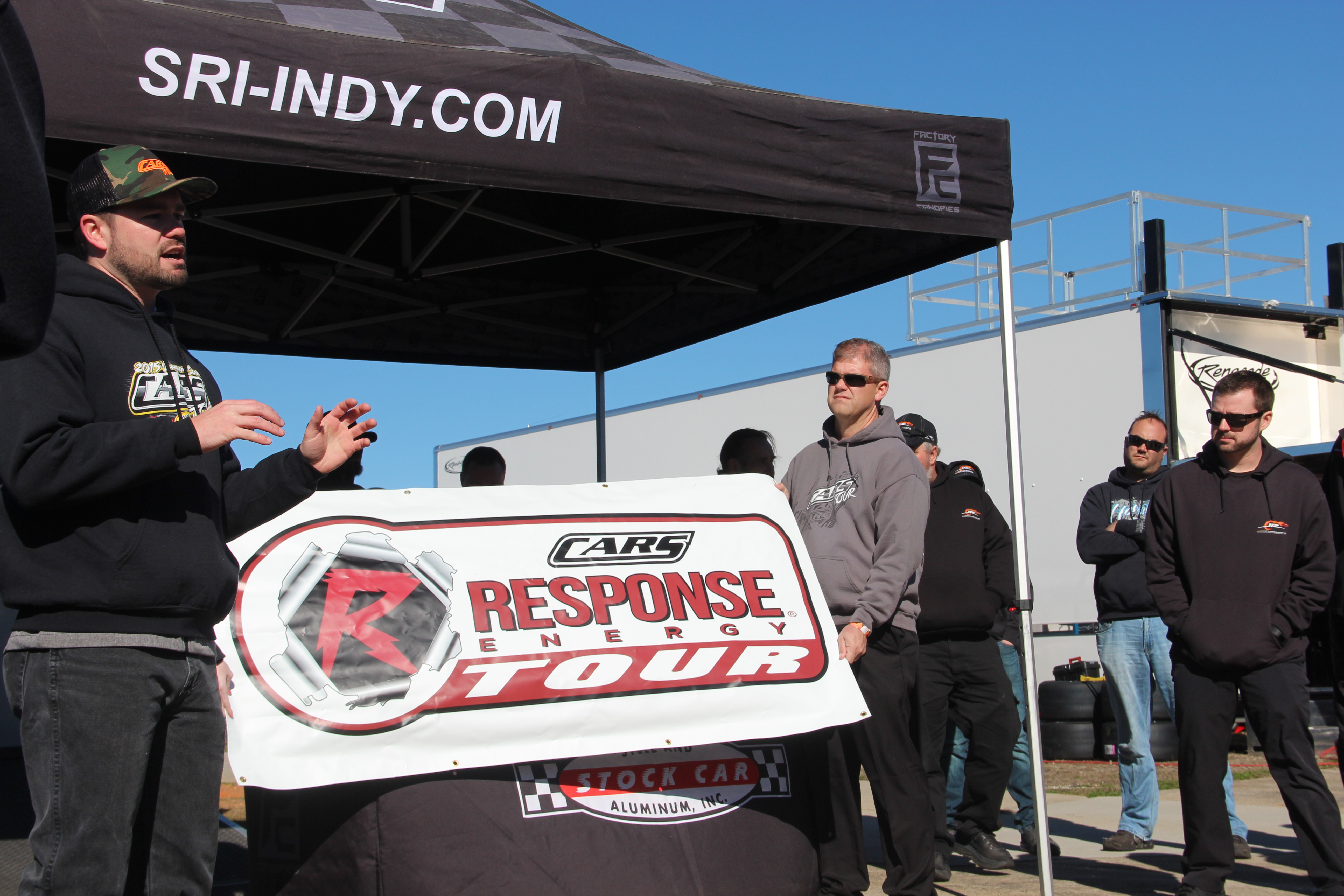 CARS Tour took the next step in its growth on Saturday morning with the introduction of Response Energy as its first ever title sponsor for the 2018 season.

The energy drink company is based out of Flat Top, West Virginia and is managed by parent company Race Energy Marketing. The owners are long-time motorsport aficionados and actually reached out to CARS Tour about the idea of forming a relationship.

“This is very cool for us, because very few touring series have title sponsors,” McNelly told Short Track Scene on Saturday. This is now another step we’ve been able to take due to good fortune and the grace of God. We’re excited because they are a racing-oriented company and down to Earth people. We just can’t wait to get started.”

For the Media Day and Open Test, signage and energy drink cans were placed all around Tri County Motor Speedway in Granite Falls, North Carolina. In addition to that, Response Energy will activate the drivers and provide the series an additional source of income.

“This is going to get us some additional TV races,” McNelly said. “We’re working with Speed Sport on that. I think we can get half of us our races on television, in addition to the live pay-per-view. I don’t think that’s a stretch.

Race Energy is going to promote our drivers and races. They’re a regional company and this is a way for us to simply grow together.”

This is the latest in a series of big announcements for the CARS Tour this off-season, which also recently revealed the Touring 12 — a group of drivers that will compete in all 12 Late Model Stock Car events this season.

READ MORE: Who are the CARS Tour Touring 12

The strategy is for McNelly and series director Chris Ragle to create a following for their drivers, not unlike NASCAR or Dirt Late Model racing.

“The biggest thing we need to do this season is get fans to the race track,” McNelly said. “But to do that, fans need to know who they are buying a ticket to watch. Our hope is that, through the Touring 12, that we can build a fanbase.

“Our fans know they’re going to watch Josh Berry, Brandon Pierce, Sam Mayer and these guys in addition to whoever else shows up like Lee Pulliam or Deac McCaskill. We need to create loyalty and we’re going to work with Response Energy and our sponsors to create that loyalty.”

Through the Touring 12 program, CARS Tour is going to create and sell merchandise on behalf of their star drivers, giving them a vast majority of the proceeds. Response Energy will also play a pivotal role in creating the merchandise.

McNelly hopes that fans will start to wear the shirts for their favorite CARS Tour drivers like they would for a NASCAR star.

“We’re making it our number one priority to make sure people know we’re here and we’re racing this year,” McNelly said. “We put on a quality show with names you’ve heard of and the closest competition possible. I hope folks come out on and enjoy the races this year.”

Every CARS Tour event will be available through a live pay-per-view stream. The season kicks off next Saturday with a $10,000-to-win Late Model Stock race at Tri County Motor Speedway — the Do the Dew 150.