Kendall, racing a Merkur XR4Ti normally campaigned at Monadnock (N.H.) Speedway, dominated early while fending off challenges from Devin Guy. In a series of late restarts, Maniatis closed the gap with the leaders, dispatching the fifteen-year-old Guy and then Kendall to take the race lead.

Maniatis kept Kendall at bay as the race wound down, until Kendall made a last-lap outside move in turns three and four. The two drag-raced down the front straightaway with Maniatis’ Nissan nipping Kendall’s Merkur by three thousandths of a second. Maniatis’ win, his second of the season, was his sixth in NEMST competition. Devin Guy, in a Honda CRX, finished third.

Parks’ Granite State Pro Stock Series was next on the track. What many expected to be an easy win for the always-dominant Eddie MacDonald ended with a last-lap pass that landed Maine’s Reid Lanpher in NHMS’ victory lane for the second time in his career.

MacDonald, of Rowley, Mass., played the ringer role to a tee early on, winning his heat and taking the early race lead from Ray Christian III. Over the first stint, it appeared that MacDonald would add another win to a résumé that already features NHMS wins in ACT, PASS and GSPSS competition. After a mid-race break to change tires, though, Derek Griffith and Lanpher put pressure on “The Outlaw,” with Griffith getting alongside MacDonald for the lead before MacDonald began to stretch his advantage.

Lanpher’s car had long-run speed, and despite the driver’s concerns that he might not make the checkered flag, he set off in pursuit of MacDonald with thirteen laps to go. Lanpher caught MacDonald as the two approached lap traffic with only a couple laps remaining. Coming off turn two on the final lap, the Manchester, Maine native went to the outside, pinning MacDonald to the inside line and taking the lead down the backstretch. MacDonald could not return the move, with Lanpher leading to the checkered flag.

Lanpher’s win is his second at Loudon, having done so as a teenager on the track’s road course layout, but his first in a stock car. MacDonald took second, with Derek Griffith finishing a distant third. GSPSS regulars Nick Lascuola and Cory Casagrande rounded out the top five. Joey Doiron, leading the points two races into the season, finished eighth in the 20-car field. 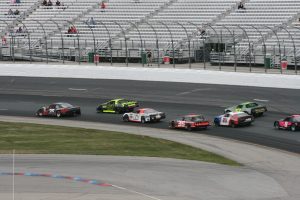 The Street Stock Showdown Series opened its three-race 2018 season as the third feature on the afternoon’s racing card, with Alby Ovitt taking the checkers in the shortened event. Ovitt, a Lee USA Speedway regular from Somersworth, N.H., charged to the front early after showing speed in his qualifying heat. Defending event winner Corey Hutchings spun on the first lap, but the Salem, Conn. racer had battled his way into the runner-up spot behind Ovitt when a caution flew with six laps remaining. With rain on the horizon, officials threw the checkered flag, ending the feature short of the 30-lap scheduled distance. Hutchings finished second with Maine’s Kyle Hewins third.

The afternoon concluded with Ronnie Silk in victory lane after a torrid fifty-lap feature for Jack Bateman’s Valenti Modified Racing Series. Silk, a two-time NHMS winner in the NASCAR Whelen Modified Tour, added a third win at the speedway to his name after outlasting his competition in the closing laps.

The 2011 NASCAR Tour champion from Norwalk, Conn. lined up alongside reigning VMRS champion Anthony Nocella for the start of the feature. Together with fellow NASCAR Tour veteran Woody Pitkat, the three put on a drafting clinic at the head of the field, with Pitkat and Silk swapping the lead multiple times while Nocella ran third. Jon McKennedy, in a car normally driven by Rowan Pennink, worked his way from the rear of the field to run fourth.

McKennedy’s charge to the front faded quickly, though, as the multi-time VMRS champion dropped through the field in the final laps. Nocella was the next to fall, as contact with Silk moved him out of the racing groove and down the running order. Silk and Pitkat continued to battle, when Pitkat suddenly slowed with four laps remaining. Silk took the lead and, with his nearest competition several car lengths back, cruised to his first career VMRS win behind the wheel of Kevin Stuart’s purple #85.

The Short Track Showdown maintains New Hampshire Motor Speedway’s tradition of providing a world-class stage to New England’s regional short track stars. From NASCAR’s Busch North Series and Modified Tour to the Pro All Stars Series and American-Canadian Tour, seasoned veterans and rising stars alike have celebrated the opportunity to compete at the region’s most visible, most prestigious track.

In its second year, the Short Track Showdown has become New Hampshire Motor Speedway’s premier non-NASCAR-sanctioned stock car event. And as four drivers celebrated their victories Sunday afternoon, the rest looked to next year as an opportunity to do so themselves.