Bubba Pollard and Jeremy Pate will lead the field to green in the first marquee Super Late Model event of the season since the start of the coronavirus pandemic.

Pollard posted the quickest speed in time trials for the 44th annual Rattler 250 at South Alabama Speedway in Kinston, Alabama — pacing the vintage 4/10-mile oval at 15.359 seconds in his iconic No. 26 Senneker/Hamner.

Pollard won the 2012 Rattler 250 but has struggled in the Southern Super Series season opener in recent years, spending a majority of the race last year one lap down.

Saturday afternoon was a statement.

“It’s always good to qualify up front,” Pollard said. “It’s good to start the race and get some laps in and just see how the car feels out front. Some good feedback is what I’m saying.

“It was a little tight in qualifying. It changed a lot but it’s not done changing. It’s going to start out front and hopefully we can make something happen tomorrow.”

Pollard is eager to overcome the struggles of the past half-decade at this particular track.

“We’ve been working really hard over the past several months to kind of get back to where we need to be,” Pollard said. “It’s just a learning curve. It’s going to take races to see where we need to be. Right now, we’re showing speed, which is a good thing.

“It feels like its going to last, but this is a long race, so we’ll have to see.”

It shouldn’t totally be a surprise but Pate qualifying on the outside pole came to a shock for those not accustomed to seeing the Larry Blount Motorsports No. 21 in the mix in recent years.

Pate and Blount have shown race winning speed since joining forces last season and contended in both the Snowball Derby and CRA Speedfest during the winter. That speed has carried over into the first race back after the shutdown.

Pate feels like he should have been on the pole but was bit by his qualifying draw.

“I missed my entry just a little bit in 3 too, on my money lap and it stayed enough to run a decent time, but I just knew someone was going to beat it. I love where we qualified. It’s going to put us in a good group of cars where we can ride and be there at the end.”

Stephen Nasse has been racing at home at the short tracks near his Pinellas Park, Florida home so didn’t have much rust to shake off. He was content with the time and starting third – inside front row.

“I felt really good,” Nasse said. “I knew we had some cross speed so I gave it all I could and got to the throttle too early off 4 and that hurt the second lap. My first lap was really good so that saved me.” 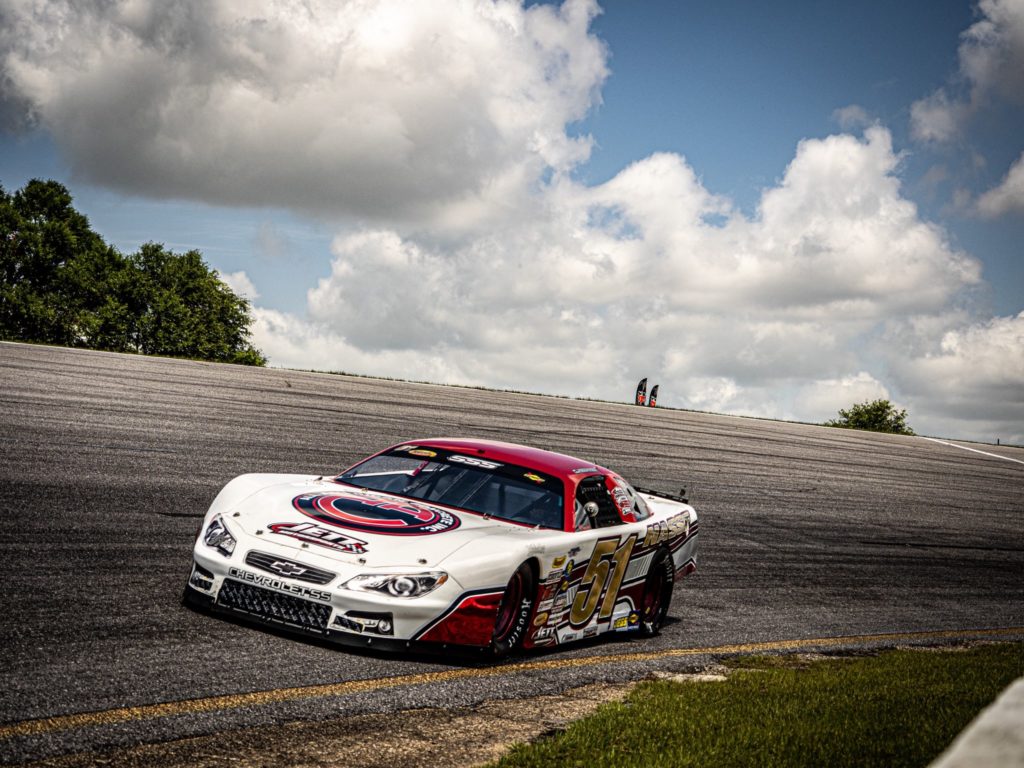 The big surprise of the session was Speedfest winner Corey Heim qualifying 16th.

The 17-year-old was one of the first cars to turn his laps and the track still featured some of the modified tires in the surface and that made the track too slick for his likings.

“The first 10 cars that went out were like on ice,” Heim said. “Majeski was fastest in practice all day and he didn’t put down a great lap. Same with me.”

The race is scheduled to begin at 2 p.m. CT and will air live on Speed51.com for its monthly and yearly video package subscribers.

The complete results and starting lineup can be found below.

Heat and humidity sets up wild Rattler 250 at South Alabama