What’s up with the duct taped numbers in Martinsville?

Duct taped numbers have replaced the decals at Martinsville for many teams. 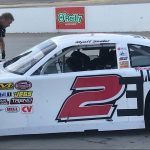 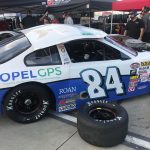 There has been a lot of talk amongst teams Friday after many of them had to smack duct tape on their Late Model Stocks over a track rule that does not permit duplicate numbers on the track.

That means for drivers like Bubba Pollard, Myatt Snider, Lee Pulliam and others had to use duct tape to compose edited or additional numbers to follow the rule.

The driver’s meeting saw some sparks, with Timothy Peters voicing his concern that teams spend a lot of money on their wraps and want a professional looking race product on the track, especially under the Martinsville lights.

Instead, they have asymmetrical, nonmatching duct taped digits.

The reasoning from the track is simple: whoever registered for the race first, got the number first.

In bold, the entry blank states: “Car numbers, garage stalls, and order of inspection will be determined by postmark date of received entry coupon. Duplicate number changes will be assigned first available choice of number per entry coupon received date.”

Simply put, whoever calls it first, gets it.

Track officials told Short Track Scene that some drivers registered as late as Friday morning. One of the incentives the track hoped to implement by “first come, first serve” numbers was for teams to be able to have that corresponding garage stall and inspection place in line, but it would also benefit the track. With an earlier entry, it allows the track to promote the driver attending.

To make numeric ends meet, many teams ordered proper decals; however, some teams are opting to stick with the tape.

Martinsville officials also said that the issue will be added to the list to discuss post-race and evaluate for future races.

On social media, Martinsville officials also said the reason they aren’t using letters, like “26a” is that fans complained they were hard to read from the stands.

Bubba Pollard confident on learning Martinsville in a LMSC: “Just another track”
Here’s where they qualified for the 2018 ValleyStar Credit Union 300 (and their motors)